A naive experiment with light

Here is a thought experiment.

Start with a low-frequency maser, say a frequency of 1 hertz.

Put a circular fan in the way of the maser, with blades that cover half the area they rotate through. Run it fast enough that the maser is blocked for half a second and then the radiation can get through for half a second.

I can think of the coherent maser radiation as being like a sine wave, and if the part of the wave nearest the axis is blocked, then I kind of know what to expect. It would be the sum of a lot of higher-frequency waves that cancel out half the time and don't cancel out the other half.

Bit what if it instead blocks everything on one side of the sine wave? What happens?

You could still get a lot of higher-frequency waves that cancel half the time. But you also get something that can't cancel. It doesn't average to zero.

Radiation that fits a sine wave tugs charges back and forth. If you remove the part that tugs them back, does what's left tug them forth on average?

Or does something different happen? Maybe something I wouldn't expect? 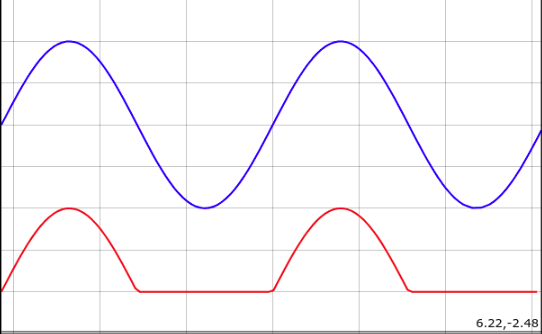 What you've written is pretty much correct. There's nothing wrong with chopping a wave up like this, nor with the average electric field being non-zero. If an antenna receives this signal, the electrons inside will simply be periodically pushed to one side and then relax back to their neutral position during the zero parts of the wave. If you connect the antenna to a spectrometer or oscilloscope, you will see that the wave has acquired frequency components at integer multiples of the original frequency (2 Hz, 3 Hz, etc.).

Mark H's reply gave me a sort of epiphany. Suddenly things started to fit together.

My undergrad physics class presented light as waves. Light can be polarized, linear or circular or elliptical. Or it can be unpolarized, a random mixture of the others. It has frequency and wavelength and constant velocity in vacuum. I didn't understand what would make light be like that. Why is that the fundamental nature of it? What's really going on?

Now I see. Classically, EM radiation is emitted by an accelerating charge.

If the source happens to oscillate back and force in a sine wave, then it will create a linearly-polarized wave of radiation perpendicular to its motion.

If the source happens to travel in a circle at constant angular velocity, then it creates radiation that is linearly polarized in the plane of its travel, and circularly polarized perpendicular to that plane, and elliptically polarized in between.

If the source follows some other path its motion can be split up into sine waves with fourier analysis, so it will look like the same thing divided into pieces.

The only reasons to think of light as polarized sine waves are first that charges do often oscillate like sine waves or in circles (or ellipses). And second that fourier analysis makes it convenient to think of them that way regardless.

There doesn't have to be any wave. Just, sometimes there is.

Not the answer you're looking for? Browse other questions tagged optics electromagnetic-radiation photons or ask your own question.

2
Spectral decomposition of radio waves and quantization
1
If one 1km EM-wave is 1 photon and very weak, how is it absorbed?
2
Reflection of radio waves at an obstacle with size half wavelength
0
Radio light/radio wave light: what does this mean?
2
Do receiving EMF antennas send out EM radiation?