Could someone jump from the international space station and live?

Felix Baumgartner just completed his breathtaking free-fall skydiving jump from $120,000\,\text{feet} = 39\,\text{km}$ above the Earth, breaking the speed of sound during the process.

I was wondering if the next step could be jumping from the international space station. The person would have to overcome the orbital velocity of the station, re-enter the Earth's atmosphere, and land on the Earth with their feet, assisted by a parachute.

Would such a stunt be survivable by a human?

Could the person wear a space suit like the one depicted in the movie "Sunshine"? Is such a space suit possible? 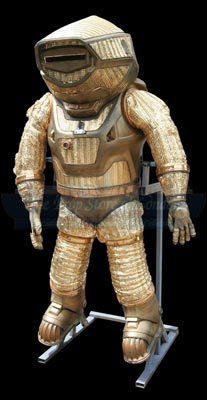 I came across an interesting news article about a company that is working on a skydiving suite that would survive freefall from outer space. 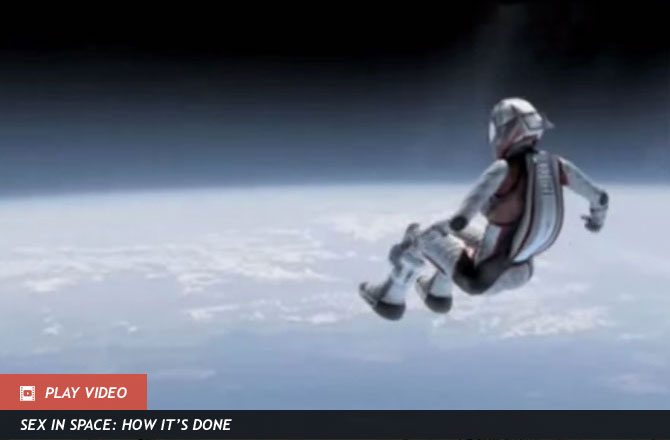 As other answers say, if someone just jumps off of the international space station(ISS), they would still be in orbit around the earth since the ISS is traveling at 17,000 miles per hour (at an altitude of 258 miles).

Instead of just jumping, imagine the astronaut had a jet pack that could cancel that speed of 17,000 miles per hour in a very short time (that would take 77 seconds at 10 Gs of deceleration). So, there the astronaut is, at 258 miles above the earth's surface, stationary and starting to accelerate at 1 G towards the earth. From the web I find that many meteors burn up at around 30 miles above the earth where the atmosphere gets thick enough to decelerate the meteor due to the air compression in front of the meteor and air friction - this compression and friction also heats up the meteor and melts it. Note that this is approximately the height that Felix jumped from!

How fast will the astronaut be going when he gets to 30 miles? The answer is he would be traveling at about 6000 miles per hour (assuming no air friction till he gets to 30 miles). Now, that is roughly 1/3 of orbital velocity and when satellites de-orbit, they need extensive heat shielding to avoid being incinerated. So that is the first problem - an ordinary space suit would not protect the astronaut - he would need very significant heat shielding - such as a Mercury capsule used by America's first manned space program. So it would not be someone just "jumping off" the ISS for sure.

For now, assume he is not burned up somehow. What about the G forces of deceleration? When satellites de-orbit they have to carefully control the angle at which they are coming in - too shallow and they could skip off back into orbit, too steep and the heat load would be too high and the deceleration would also be too high to survive. But our astronaut is falling straight in - perpendicular to the atmosphere!

This is just a guess, but if he has to decelerate from 6000 MPH to a terminal velocity of something like 600 MPH within about 5 miles or so, the G forces would be something like 30 Gs, so he would not survive and there is no way to protect yourself from that many Gs. Felix started at 0 MPH at about that height which is why he survived.

It depends on how you define the problem.

Humans have re-entered the atmosphere from the International Space Station many times, by riding in either a Space Shuttle or a Soyuz capsule.

Someone re-entering without a spacecraft of some sort would obviously have to wear some kind of pressure suit (as Felix Baumgartner did in his jump). How elaborate is the pressure suit allowed to be?

A pressure suit is in effect a self-contained spacecraft. A Mercury or Vostok capsule (the only one-person re-entry vehicles I'm aware of) could be thought of (rather loosely) as a very large pressure suit with an odd shape.

Thanks to mmc in comments, the proposed MOOSE comes close, but it's still more a capsule than a suit; in fact, the astronaut would have worn a space suit while using it.

The answer is clearly yes if you're willing to define "pressure suit" loosely enough. It's more a matter of problem definition than of physics and engineering.

Depends how much fuel you have.
The space shuttle and other craft need such large heat shields because they use it to dump all their kinetic energy 'for free'. The shuttle only uses it's engines for takeoff and has only some small thrusters available in orbit.

UPDATE 2: If allowed to freely design the spacesuit the answer is yes.(see below)

The short answer is no. (SEE UPDATE)

The longer answer is that there are a few key obstacles. One is that the person on the space station is in a relatively stable orbit around the planet. So while jumping from the space station would impart a slightly different momentum, in principle they would wind up in just a slightly different orbit around the earth, depending on how they jumped. In that case they would have to rely upon the slow decay of their orbit brought on by things like friction in the rarefied (but still present) atmosphere and impacts of micro-meteors etc. In most cases this would not be adequate for a sufficient bleeding of velocity to cause the person to fall to earth before their air supply ran out. In fact they might be in orbit for quite some time (e.g. years) before they actually re-entered the atmosphere.

Since the question states that the person could overcome the orbital velocity, assuming they could reduce their velocity sufficiently, they would reenter the atmosphere at sufficiently high speeds that friction of the atmosphere would burn off their suit fairly quickly and leave them exposed to similarly harsh conditions.

P.S. Wikipedia does have a good article on rules of thumb for temperatures experienced.

UPDATE: Since the rules have changed after the initial question was asked, and we are considering some sort of advanced technology, then I will change the answer to yes with reservation. This question is no longer about a person jumping from the space station, but about the specific design of the reentry vehicle. If the goal is to have an articulating suit when one is complete with the jump, then there is nothing physically impeding this. It is no longer a physics question but an engineering question. Of course the biggest obstacle is heat shielding and mass of the heat shield. Re-entry angle etc would also be a key factor, but the technology is feasible as demonstrated by MOOSE

UPDATE 2: Now I am even more convinced that given free design criteria the answer is yes. Reposting my comment to FrankH:

I think your example is fine, but I also think that lifting bodies are scalable, so if we wanted to design an advanced suit we could principally use a modified lifting body approach. Suitable foam insulation and cooling could be utilized and the diver could use a similar re entry program as the Space Shuttle. All I wanted to get at is the question was too ambiguous to arrive at a definitive answer.

To clarify, when I say ambiguous I mean the person asking the question has left too many undefined constraints.

Even though our International Space Station is in a Low-earth orbit, It's at an altitude of about 350-400 kms (which lies in the exosphere). In order to overcome the orbital velocity, one needs some special thrusters in addition to their pressurized spacesuit. Because he has to drop out and decelerate from ISS which is swirling at a velocity of about some 7000 m/s.

Spacesuit requirements: That suit you've provided should withstand extreme temperatures (Wiki says 200 C max) and low atmospheric pressures (which could cause Decompression sickness) and also provide sufficient supply of oxygen till he lands.

(For now, the best suite I'd recommend is available here)

Re-entry: Before jumping from such a high velocity, the jumper has to decelerate himself. Successful re-entries could be made if the space-suite manages to perform either some kinda aerodynamic braking stunts (Capsules or small portable cockpits would be better for drags) or use a thruster (I think I'm upgrading the suit) for maneuvering in the atmosphere. The only challenge for re-entry is fighting the thermosphere in the exosphere. As the density of air is also too low there, he'll soon break the sound barrier more easier than Felix (thereby rank above him). Air friction would also be very low, thereby making him to reach high velocities ('cause only $mg$ acts here). Once he enters into stratosphere, he experiences some air-friction which steadily increases as he traverse across different layers and at last he'd attain the terminal velocity 50 m/s and then deploy his parachute to braise himself.

If all the above works good, then he'd definitely survive. The main challenge is the re-entry where it's better to use drags. Even NASA has declined the re-entry altitude to be 76 mile where air friction would be easily noticeable.

The result would be similar to the re-entry of the space shuttle. The individual would encounter severe heat conditions, and be burned to a cinder.

Not the answer you're looking for? Browse other questions tagged newtonian-mechanics projectile free-fall drag space-travel or ask your own question.

13
From how high could have Felix Baumgartner jumped without disintegrating like a shooting star?
3
From how deep into space can a human "skydive" back to earth?
1
What is the highest possible space dive free fall?

0
Can someone explain the physics of a standing jump?
3
What is stopping us from stick building a space station?
1
Effect of movements of astronauts on International Space Station
2
How far would an arrow go in a space station and still be deadly?
0
Could running around a space station increase the spin even after the runner stops?
1
Coriolis force and liquid on a rotating space station?
0
Could you use a balloon to show the drag from the gas/atmosphere of something orbitting near the ISS?