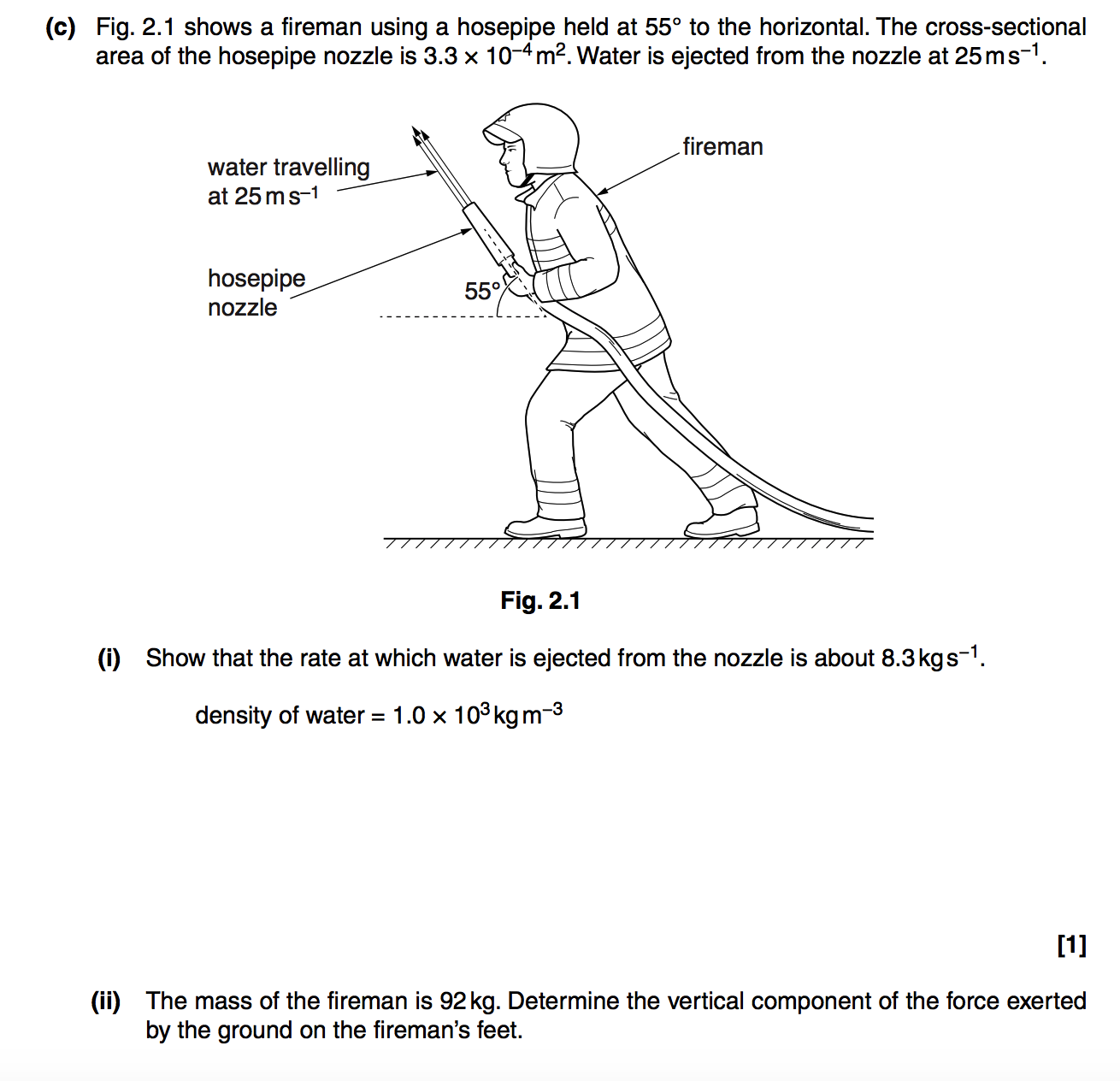 I want to ask a question about part (ii).

I worked out part (i) using the volume of the cylinder and then multiplying it by the density of the water, which gave an exact answer of $8.25 kg s^{-1}$

In part (ii), this is my method thus far: The ground exerts a force to balance the fireman's weight (Newton's third law):

Now, I recognised there would be a vertical component of the force of water, which I thought was weight of the water, but then I realised that it wasn't acting on the fireman itself.

I then realised Newton's second law: $F = \frac{\triangle p}{\triangle t}$ where t = 1 so I then worked out the force needed to accelerate the water from rest per second:

But I'm confused. Surely the force needed to accelerate the water has a vertical component acting upwards, so it doesn't contribute to the contact force on the fireman's feet?

It is a common misconception that the force on the nozzle is the same as the thrust on a rocket. Water is ejected through the nozzle but it is not ejected (thrown) by the nozzle. The water has already been accelerated (ejected/thrown) far back in the hose, at the pump. That is where the thrust occurs as the water is accelerated. There is no change in momentum of the water in the straight part of the nozzle so there is no force there. See Backward Reaction Force on a Fire Hose, Myth or Reality?

The downward and forward (not backward) force which the fireman feels is the force on hose caused by the change in direction of the water - which is also a change of momentum.

But in this problem the fireman re-directs the water upwards, bending the hose. The water exerts a reaction force on the hose equal and opposite to its rate of change of momentum. The fireman has to provide an upward and backward force to prevent the hose from unbending. 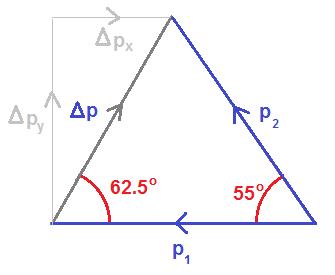 Note that the horizontal change in momentum of the water $\Delta p_x$ is backwards (ie to the right) so the reaction force on the hose is forward (to the left). This is the opposite direction to that predicted by the incorrect use of the thrust equation.

0
Why there is an extra componet of force in this Equilibrium state?
13
What force causes the ball to move up?
2
Adding forces acting at different points on a body
1
Forces acting on the water in a bucket when the bucket is vertically spun on a string?
0
Lifting a weight and reaction force from ground
0
Is Khan Academy wrong on centripetal force calculation?
2
What's wrong in stating that equal gravitational forces act on two identical masses at different heights, as they have the same acceleration $g$?