Energy loss when a ball hits a wall

Thinking about this post : Conservation of energy in the breaking of glass

How is energy conserved when I throw a heavy ball at a piece of glass and cause it to shatter? The ball starts off with significant kinetic energy and ends up with very little. The glass sees what I think can be a small change in potential energy, depending on how you position things, but otherwise, I still see humongous energy losses. Is it heat energy during the process of shattering? Or am I neglecting something else...

I wanted to estimate the thermical loss when a ball was hitting the wall. I thought it came mainly from the air inside the ball being compressed.

I have little knowledge in continuum mechanics and was only interested in an estimate so I imagined a toy model:

A cylindrical piston of radius $r$, filled with air, is thrown toward a wall with a velocity $v$. It hits a wall so the air is compressed.

The phenomenon was, in a first time, assumed so quick that thermic exchanges could be neglected. However, the equations we reached were symetrical for (t -> -t) so they described a reversible phenomenon which I don't want. So I added a convection term with a thermal flux $$\Phi = h(T-T_{0})\pi r l$$ where $h$ is the convection coefficient, and $\pi r l$ is the surface of the piston.

Let us isolate two systems. $S_1$ is the body of the piston, its mass will be denoted $m$. $S_2$ is the air inside the piston, the lid plus the stem.

Applying Newton's law and the 1st principle of thermodynamics, I get

I then did a numerical resolution in Python.

Remembering that at first this was inspired of a ball hitting a glass panel, I took

I decided that the piston leaves the wall when $\ddot{l} = 0$ because the normal reaction of the wall cancels out.

I get the following plot : 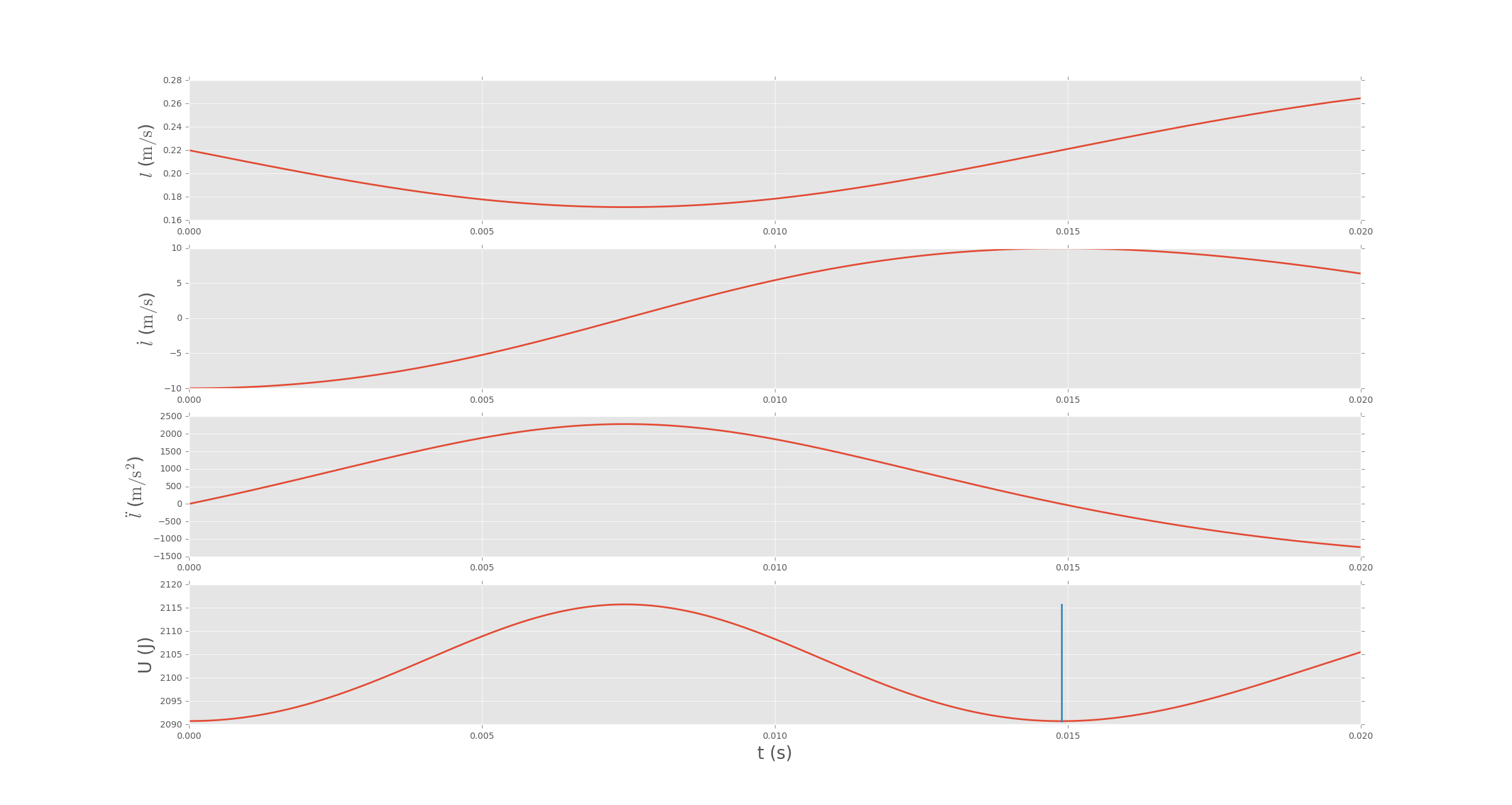 Browse other questions tagged newtonian-mechanics thermodynamics energy-conservation or ask your own question.

7
Conservation of energy in the breaking of glass

3
What is the interpretation of pressure times volume as energy?
1
derivation of navigation equation and specific force
0
How to animate a ball rolling down an incline?
1
Problem with Noether Theorem to prove that energy is conserved
0
Conservation of Newton's law
1
Energy not conserved if mass is variable