Today I let some melted chocolate solidify in a smooth bowl in my fridge. When it had settled, I gently heated the outside of the bowl with warm water to unstick the chocolate. It caught my attention that the remaining chocolate (both in the bowl and on the larger piece I removed) formed a beautiful, fractal tree-structure of sorts. I noticed that the various branches in the tree do not seem to intersect each other. 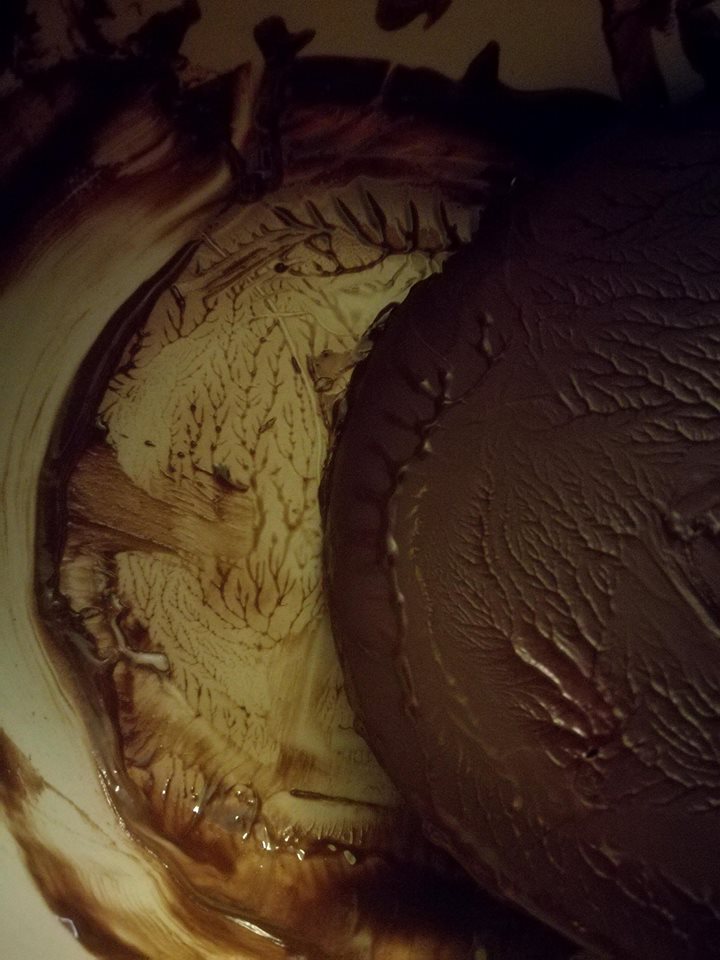 Next it occured to me that I had seen a similar thing happen to soft butter on a cold knife. I suspect the effect emerges because the fatty compounds in chocolate/butter try to minimize their surface tension (like water forming droplets), but why is the minimum-energy-configuration a non-self-intersecting, fractal branch structure, and not simply droplets? Could it be some tradeoff between surface tension, viscosity and density? 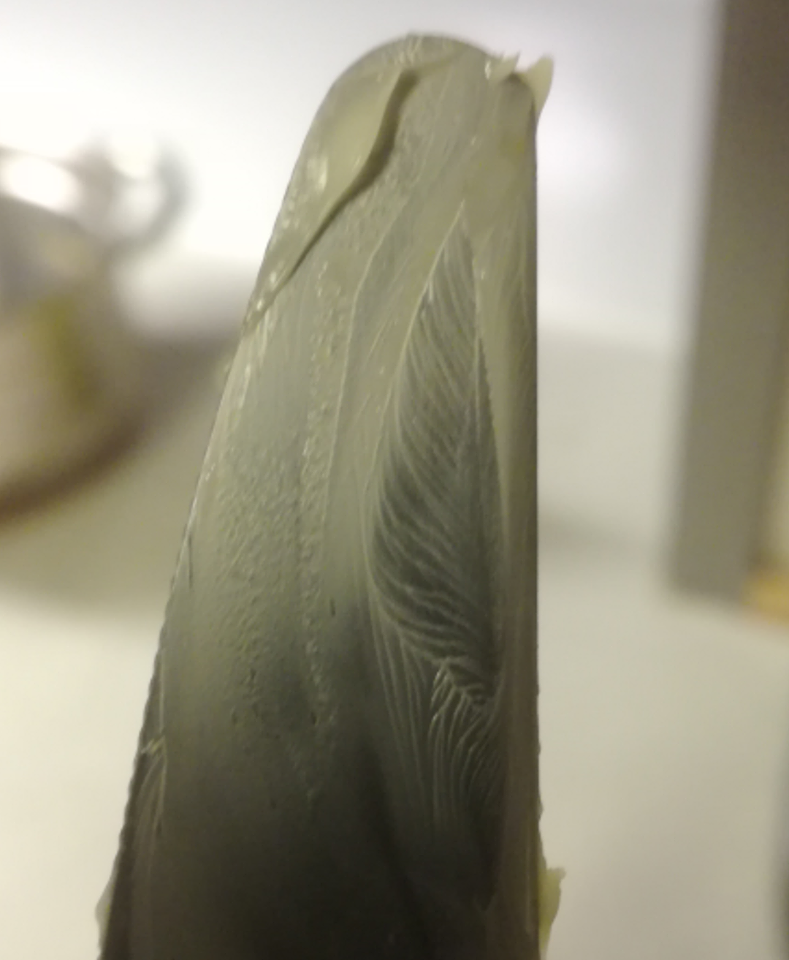 EDIT User, Bert Hickman, suggested the effect might be an example of a "Hele-Shaw cell". This apparatus is used to demonstrate "Hele-Shaw flow" of a liquid between two plates: 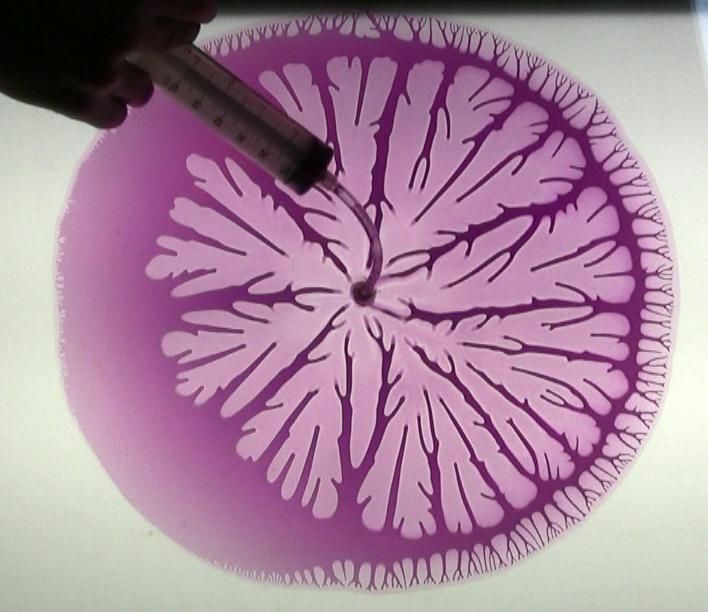 This explanation makes sense considering what I did to the chocolate. When re-heating it the chocolate between the bowl and the upper layer is liquified. Once I remove the upper layer air rushes in and creates the peculiar flow. I found this nice video demonstrating the effect with water and oil.

That is the microstructure of fat crystal networks.

Figure 3 depicts the mesoscale of a fat crystal network at two different magnifications. Crystals and polycrystal aggregates in the micrometer range, as well as the fractal distribution of crystalline mass in the network, can be observed clearly. The formation of these polycrystals is influenced strongly by external fields (such as temperature gradients and shear fields) experienced during nucleation and crystal growth.

The new experimental results on the nanoscale of fats set the stage for the updated depiction of the structure of TAG crystal networks at different length scales (Figure 9). The complex combination of the structural properties along all length scales, from TAG molecules, primary nanoplatelets, and mesocrystals to a colloidal network of polycrystals, determines the macroscopic properties of a fat, such as its mechanical strength, oil-binding capacity, and sensory properties. 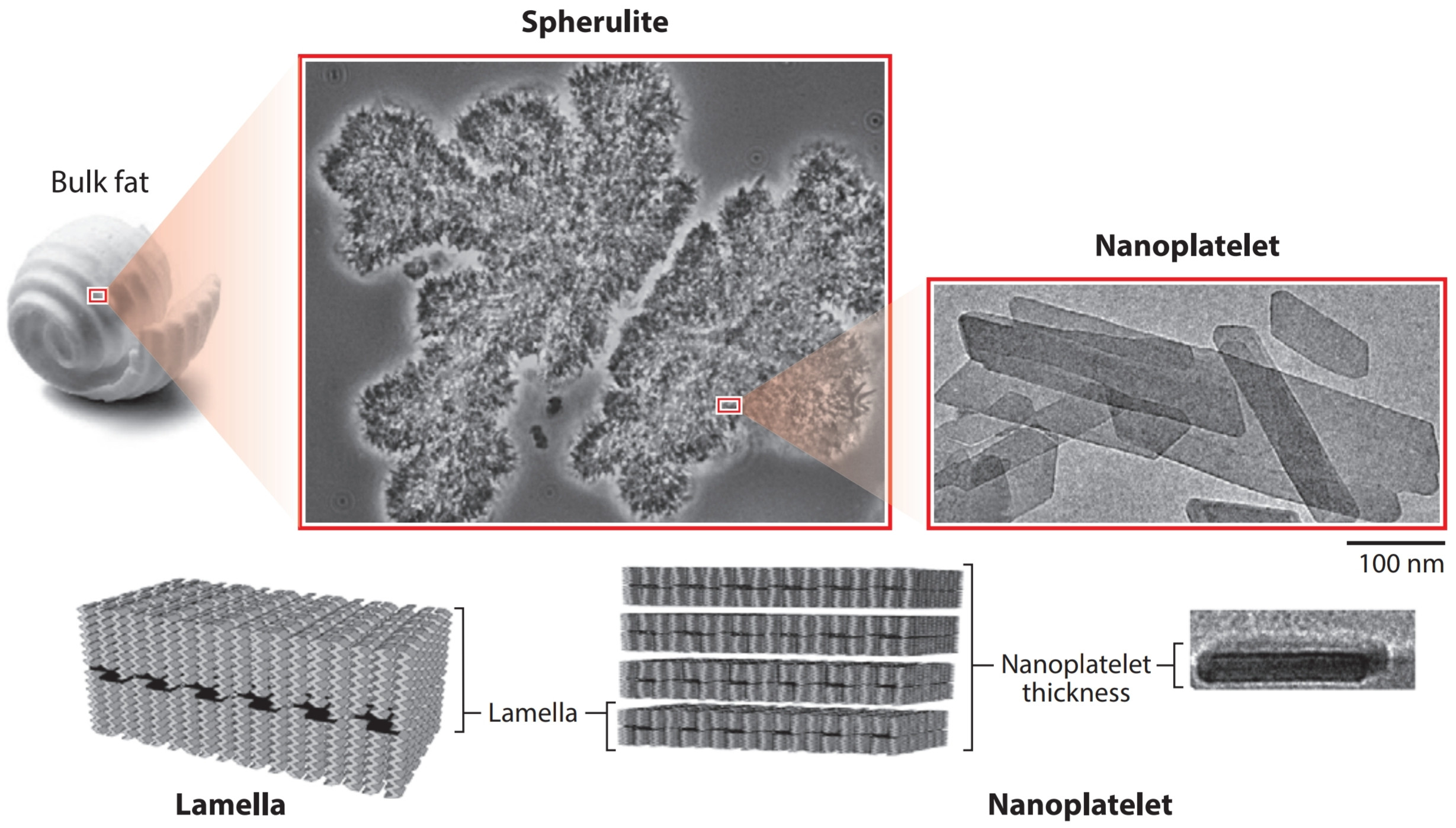 Figure 9. Structural levels present in a triacylglycerol (TAG) crystal network. The crystalline unit is a platelet with sizes within the range of several nanometers; in turn, nanoplatelets are composed of stacks of TAG lamellae. At the mesoscale (several micrometers), spherulites can be observed that then self-assemble to constitute a three-dimensional network. Adapted from Marangoni et al. (2012) with permission from the Royal Society of Chemistry.

The mathematics behind this are explained in: "Confectionery and Chocolate Engineering: Principles and Applications" by Ferenc A. Mohos.

Not the answer you're looking for? Browse other questions tagged thermodynamics everyday-life surface-tension viscosity cooling or ask your own question.

6
Why do chocolate bars usually break at the cleavages?
0
How make the perfect Hot Chocolate? Mixing liquids and temperature
4
Burning vs Melting - when applied to cooking chocolate
10
Fractal patterns on water
0
Will a vinegar and water mixture prevent ice from forming?
12
Why do cold chocolate bars crack randomly outside the crevasses when twisted?
2
Condensation forming on hot surface?