I will use the explanation in this site as an example of what looks to me as a wrong explanation of why acceleration in uniform circular motion is centripetal.

This site, as other sources, reasons as follows: 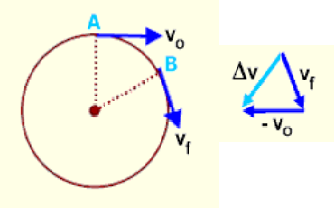 I suspect that, even in the original example of the site, the operation, if well done, should not show that the change of velocity vector is pointing towards the center, but in a direction justifying precisely how much the particle has changed its direction from point A to B and that, if their drawing shows a center-seeking arrow, it is only because it has been (unconsciously) re-arranged to that end.

Would you agree to this or did I miss anything?

kinematics acceleration centripetal-force
Share
Improve this question
asked May 25 '18 at 19:26

The issue that comes up with averages is

At what location along the arc do you compare the average acceleration to the position to decide if it is centripetal or not?

But it is centripetal half-way along the arc. That turns out to always be the case (at least for arcs less than ninety degrees), and has the desired property in the limit of a short arc as well.

Not the answer you're looking for? Browse other questions tagged kinematics acceleration centripetal-force or ask your own question.