A few years ago, I came across this browser-based app that simulates the trajectories of test particles in the Schwarzschild spacetime and shows an animation. I used it a little bit as a demonstration for teaching. One thing I didn't like was that when the trajectory hit the event horizon, the simulation just stopped abruptly. Now I'm working on a fun project to do something similar but without this limitation. (I would also like to make it a little more user-friendly.)

I imagined that one reason for the limitation was that maybe the simulation was using Schwarzschild coordinates, which misbehave at the event horizon. I've worked out the necessary Christoffel coefficients in Kruskal-Szekeres coordinates so as to sidestep this issue.

Is there any better way to do this kind of visualization?

A method that certainly works is to plot a point crawling across a Penrose diagram, with time in the animation representing the proper time of the particle. But this seems a little esoteric for the average person playing with a simulation they come across on a web site. 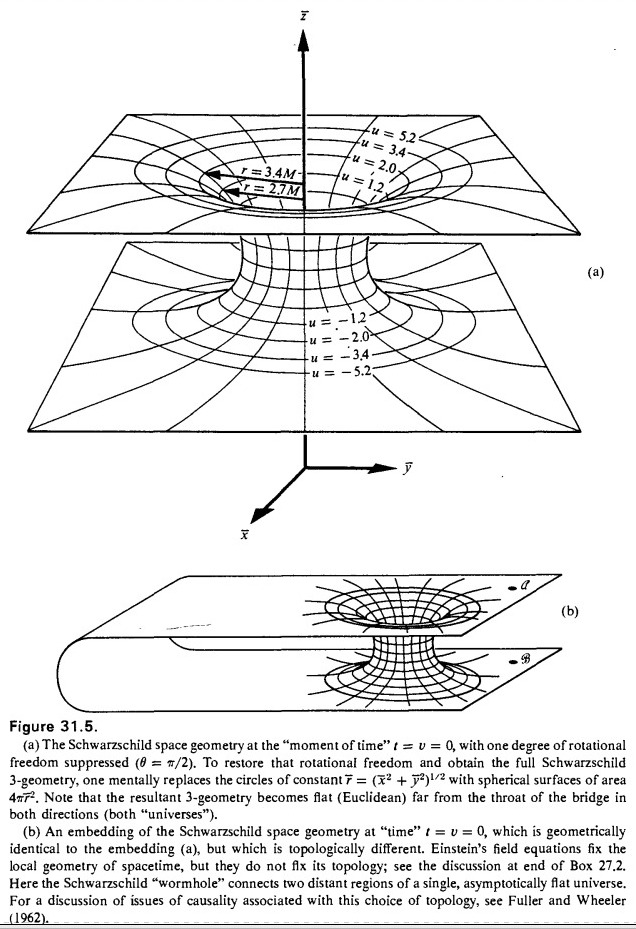 This provides a method of visualizing the addition regions of spacetime in the maximal extension of the Schwarzschild spacetime.

that is my little app ;)

Stopping at the horizon was an aesthetic decision, the effective potential allows horizon crossing no problem. It is easy to change this in the code but it looks a bit silly to my eyes. If you want you can have it come right out into another universe, but that wasn't the intention (I was trying to compare Newtonian and GR orbits the best I could).

Incidentally, I wrote it after I saw http://www.fourmilab.ch/gravitation/orbits/indexj.html and thought I could do better ;)

I am on my work account ATM, I can say more when I get back home later.The source is here.