Causal explanation of Vaidman's group "Asking photons where they have been" experiment?

There is this surprising "Asking photons where they have been" PRL 2013 article about experiment where they are able to "ask photons" which mirrors they have visited: by vibrating each mirror with different frequency and performing Fourier transform of the final beam - visited mirrors are marked in the power spectrum.

The problem is that this way they see mirrors we would naively say they shouldn't - mirrors A,B below: 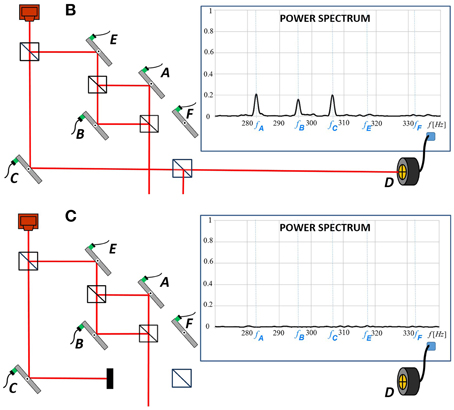 The small inteferometer (with mirrors A,B) is set for destructive interference: such that no photons go through mirror F, what is tested in the lower setting: that if we block beam from mirror C, no light gets to detector.

They explain that we see A, B, C mirrors because only these tree are visited by photons propagating in both time directions.

The answer to this question is definitely yes. Indeed, the authors provide this analysis in the supplementary materials (1) (pdf w/ journal access required).

The field at the detector, for the first setup given above, has this form:

It is not very transparent from this form which peaks will result in each situation, and in that regard the TSVF does indeed appear to be useful in this case. However, a few conclusions can be drawn:

Therefore, my suspicion (as of yet unconfirmed) is that this experiment can be read as a measurement of a weak modulation either on top of a strong beam or by itself. In the first case you get a field of the form $\epsilon \cos{\omega_{mod} t} + \cos{\omega_c t}$, and in the second case you only have $\epsilon \cos{\omega_{mod} t}$. When you square these to get the power, the modulation by itself has a power of order $\epsilon^2$, but when superimposed on the strong beam you get interference terms of order $\epsilon$. In other words, the effects from a weak modulation can be made arbitrarily larger than the modulation itself by interfering it with a strong beam.

Of course, this doesn't sound nearly as exciting as the language the authors use in the main text to describe what they see. This is a good illustration of a feeling I have about a lot of these types of papers- they claim to demonstrate some new flashy effect, which does explain the data, but then buried in the text or supplemental material they also admit that there is a much more mundane equivalent picture.

(Note added: rereading the paper, I see that they do mention this perspective a bit at the end and say that the "effect is due to a tiny leakage of light in the inner interferometer," supporting the suspicion given above. So I cannot fault the authors' transparency, but still personally find some of the philosophical discussion to be a bit much for classical wave interference.)

It is very delicate to talk about "the proper understanding" of such an experiment. What is more relevant is how to develop an intuition. The authors here propose that the two-state vector formalism is intuitively more useful that a trajectory-based view.

There is nothing new here in the sense that we know that quantum objects such as elementary particles do not have trajectories. This is often watered down into conceptions implying that "we can/do not know what the actual trajectory is", somewhat implied here by the title of the paper, "asking photons where they have been", which strongly suggests they have been somewhere; but there is no counterfactuality in quantum mechanics: there is no answer to a question that is not asked.

The questions asked in this experiment are not about trajectories. They are about what photons "see" from the overall setup. In this regard it is analogous to the Elitzur-Vaidman bomb tester, or even the Aharonov-Bohm effect. These show that a quantum system has a sort of non-local awareness of the overall setup is it part of.

The two-state vector formalism takes non-locality seriously, in the sense that is does not distinguish past and future boundary conditions. This is the spirit of the path integral, which has an bird-eye, panoramic view of a quantum system that does not attempt to describe its evolution moment by moment, but is only concerned with computing the probabilities for the "observable end points" of its behavior, so to say.

So it makes sense that when the information we are interested in is scattered in distinct parts of a setup (here, the mirrors), we have a better intuition using a framework explicitely giving up on unobserved continuity than with another mental view that assumes there is meaning in trajectories.

Not the answer you're looking for? Browse other questions tagged quantum-mechanics interference quantum-interpretations causality time-reversal-symmetry or ask your own question.

48
In QFT, why does a vanishing commutator ensure causality?
3
Should state vectors be considered constant?
16
Physical interpretation of the retarded vs. Feynman propagators?
0
Norm of quantum state in three dimensions
6
Free particle Schrodinger equation: propagator
0
Orthonormality and ket expansion for uncountable basis kets, such as the position eigenkets?
0
How to generalize outer product into its integral form assuming continuous basis?