What determines the outcome of a supernova?

Question: What determines the outcome of a supernova? When a sun collapses into itself creating a supernova what decides if it will be a white dwarf star, neutron star or black hole? I’ve pondered over the question myself but alas I feel as if I need help from my peers.

Supernovae do not produce white dwarfs. This is a distinct evolutionary pathway followed by stars with mass below about 8 times the Sun ($8M_{\odot}$) - their cores are destined to become electron-degenerate white dwarfs with masses less than about $1.25 M_{\odot}$.

Neutron stars and perhaps black holes are produced in supernovae, involving the collapse of the core of a star that is more massive than $\simeq 8M_{\odot}$.

If the collapsing core is not particularly massive (resulting from a progenitor say of $<15M_{\odot}$, though the boundary is not certain, and also probably depends on the initial composition of the star), then it is likely that the collapse will be halted by the strong nuclear repulsion felt between neutrons (produced by electron capture onto protons) and to a lesser extent by neutron degeneracy pressure. This results in "core bounce", and subsequently a transfer of a tiny fraction of the collapse energy into the stellar envelope, causing a supernova.

The key parameters determining the fate of a massive star are the initial progenitor mass - the more massive, the more likely to form a black hole. Metallicity is also important. If a star is born from gas that has a higher concentration of heavier elements, its envelope is more opaque and the progenitor is likely to lose more of its initial mass through a radiatively driven wind. Low metallicity progenitors probably have more massive cores at the time of core-collapse and are therefore more likely to form black holes.

The plot below (from work by Heger et al. 2003) illustrates the argument above and shows the likely remnant as a function of initial mass and metallicity. 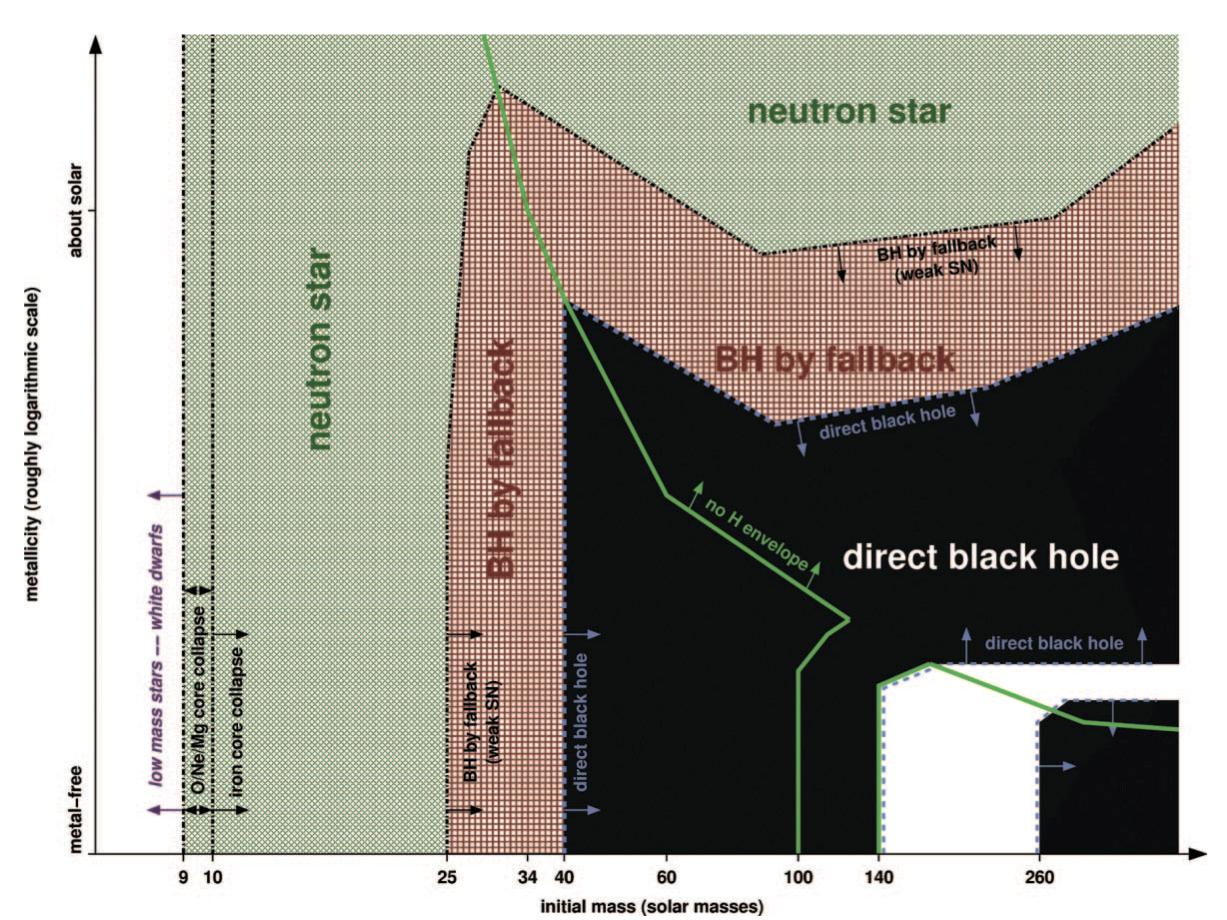 Theoretical studies indicate that most supernovae are triggered by one of two basic mechanisms: the sudden re-ignition of nuclear fusion in a degenerate star (white dwarfs, neutron stars, and black holes) or the sudden gravitational collapse of a massive star's core.

In the first instance, a degenerate white dwarf may accumulate sufficient material from a binary companion, either through accretion or via a merger, to raise its core temperature enough to trigger runaway nuclear fusion, completely disrupting the star. In the second case, the core of a massive star may undergo sudden gravitational collapse, releasing gravitational potential energy as a supernova.

While some observed supernovae are more complex than these two simplified theories, the astrophysical collapse mechanics have been established and accepted by most astronomers for some time. Source: Wikipedia "Supernova".

Consequently, a white dwarf with a mass greater than the limit is subject to further gravitational collapse, evolving into a different type of stellar remnant, such as a neutron star or black hole. Those with masses under the limit remain stable as white dwarfs. Collapse is not inevitable: most white dwarfs explode rather than undergo collapse.

To first order, just the mass. If the mass is less than the Chandrasekhar limit (about 1.4 solar masses), the electron degeneracy pressure is sufficient to stop the collapse and you end up with a white dwarf. If the mass of the star remnant is greater than the Tolman-Oppenheimer-Volkoff limit (somewhere around 2 to 3 solar masses) it collapses into a black hole.

Note that these masses are both the mass of whatever is left as it is collapsing, which is much less than the original mass of the star. The limit for a black hole corresponds to something more like 15 to 20 times the mass of our sun for the original star, and to form a neutron star is more like 10 solar masses.

When the fusion finally stops, there is no thermal or radiative pressure to hold up the star against its own gravitational force. In in the case of low-mass stars ($M < 1.4M_\odot$), electron degeneracy pressure can stop their imminent collapse. This pressure is a product of the Pauli exclusion principle - a quantum mechanics principle which states that two Fermions cannot occupy the same state simultaneously. Most white dwarfs are about $0.6M_\odot$ and have radii comparable to Earth, about $6000$ km.

If the stellar mass exceeds $1.4M_\odot$ (the Chandrasekhar limit), electron degeneracy will crumble in the force in the gravity. Electrons will be captured by nuclei, producing neutrons. The star is then held up by neutron degeneracy pressure, also a result of Pauli exclusion principle. These stars are called neutron stars, and they have radii on the order of 10-20 kilometers, and maximum masses around $2M_\odot$.

Any more massive than this, and even neutron degeneracy cannot withstand the overpowering force of gravity. In this case, nothing can stop the gravitational collapse, and the stellar core becomes a black hole. These stars represent a singularity with infinite density, where all stellar density has been compressed into a single point.

Not the answer you're looking for? Browse other questions tagged black-holes quantum-information astrophysics supernova or ask your own question.

37
What is the origin of elements heavier than iron?
32
What is the theoretical lower mass limit for a gravitationally stable neutron star?
31
Throwing a micro black hole into the sun: does it collapse into a black hole or does it result in a supernova?
4
What could break up a neutron star?
3
Pulsar-white dwarf binary
1
Can a binary star system create a stationary black hole?
4
When a star become black hole, does it attain a low entropy state?
21
Why can't the degeneracy pressure self-adjust itself to resist gravitational collapse?