I understand that gravity is not energy, but is force, but my question revolves around if the presence of gravity in the universe results in a continuous amount of energy, from gravity-induced collapsing and the resulting explosion that occurs in stars/nova, as an example ?

Can this process of mass, contracting as a result of gravity, into stars, and then the explosions/nova that occurs later on, only to be followed again by another cycle of contracting, continue indefinitely, almost like "perpetual motion" ?

... my question revolves around if the presence of gravity in the universe results in a continuous amount of energy, from gravity-induced collapsing and the resulting explosion that occurs in stars/nova, as an example ?

See: "Since gravity is unlimited, can we use it as an infinite energy source?"

"If I lift a bowling ball to the top of a hill and let it go, the ball falls, speeds up, and seems to gain energy. Isn't this a case of gravity giving energy to the bowling ball? No. Again, gravity is just a force, so it just describes how objects interact. The energy that the ball displays as a falling motion came from my muscles when I hefted the bowling ball to the top of the hill, and not from gravity. Gravity just provides a way to temporarily store energy in an object."

Can this process of mass, contracting as a result of gravity, into stars, and then the explosions/nova that occurs later on, only to be followed again by another cycle of contracting, continue indefinitely, almost like "perpetual motion" ?

Where 'perpetual motion' machines fail is that they lose energy rather than create enough to run and maintain themselves.

These laws of thermodynamics apply even at very grand scales. For example, the motions and rotations of celestial bodies such as planets may appear perpetual, but are actually subject to many processes that slowly dissipate their kinetic energy, such as solar wind, interstellar medium resistance, gravitational radiation and thermal radiation, so they will not keep moving forever.

Thus, machines that extract energy from finite sources will not operate indefinitely, because they are driven by the energy stored in the source, which will eventually be exhausted. A common example is devices powered by ocean currents, whose energy is ultimately derived from the Sun, which itself will eventually burn out. Machines powered by more obscure sources have been proposed, but are subject to the same inescapable laws, and will eventually wind down.

In 2017 new states of matter, time crystals, were discovered in which on a microscopic scale the component atoms are in continual repetitive motion, thus satisfying the literal definition of "perpetual motion". However, these do not constitute perpetual motion machines in the traditional sense or violate thermodynamic laws because they are in their quantum ground state, so no energy can be extracted from them; they have "motion without energy".

The complex process of stellar evolution is explained on Wikipedia's site:

"Stellar evolution is the process by which a star changes over the course of time. Depending on the mass of the star, its lifetime can range from a few million years for the most massive to trillions of years for the least massive, which is considerably longer than the age of the universe. The table shows the lifetimes of stars as a function of their masses. All stars are born from collapsing clouds of gas and dust, often called nebulae or molecular clouds. Over the course of millions of years, these protostars settle down into a state of equilibrium, becoming what is known as a main-sequence star.

Nuclear fusion powers a star for most of its life. Initially the energy is generated by the fusion of hydrogen atoms at the core of the main-sequence star. Later, as the preponderance of atoms at the core becomes helium, stars like the Sun begin to fuse hydrogen along a spherical shell surrounding the core. This process causes the star to gradually grow in size, passing through the subgiant stage until it reaches the red giant phase. Stars with at least half the mass of the Sun can also begin to generate energy through the fusion of helium at their core, whereas more-massive stars can fuse heavier elements along a series of concentric shells. Once a star like the Sun has exhausted its nuclear fuel, its core collapses into a dense white dwarf and the outer layers are expelled as a planetary nebula. Stars with around ten or more times the mass of the Sun can explode in a supernova as their inert iron cores collapse into an extremely dense neutron star or black hole. Although the universe is not old enough for any of the smallest red dwarfs to have reached the end of their lives, stellar models suggest they will slowly become brighter and hotter before running out of hydrogen fuel and becoming low-mass white dwarfs.". 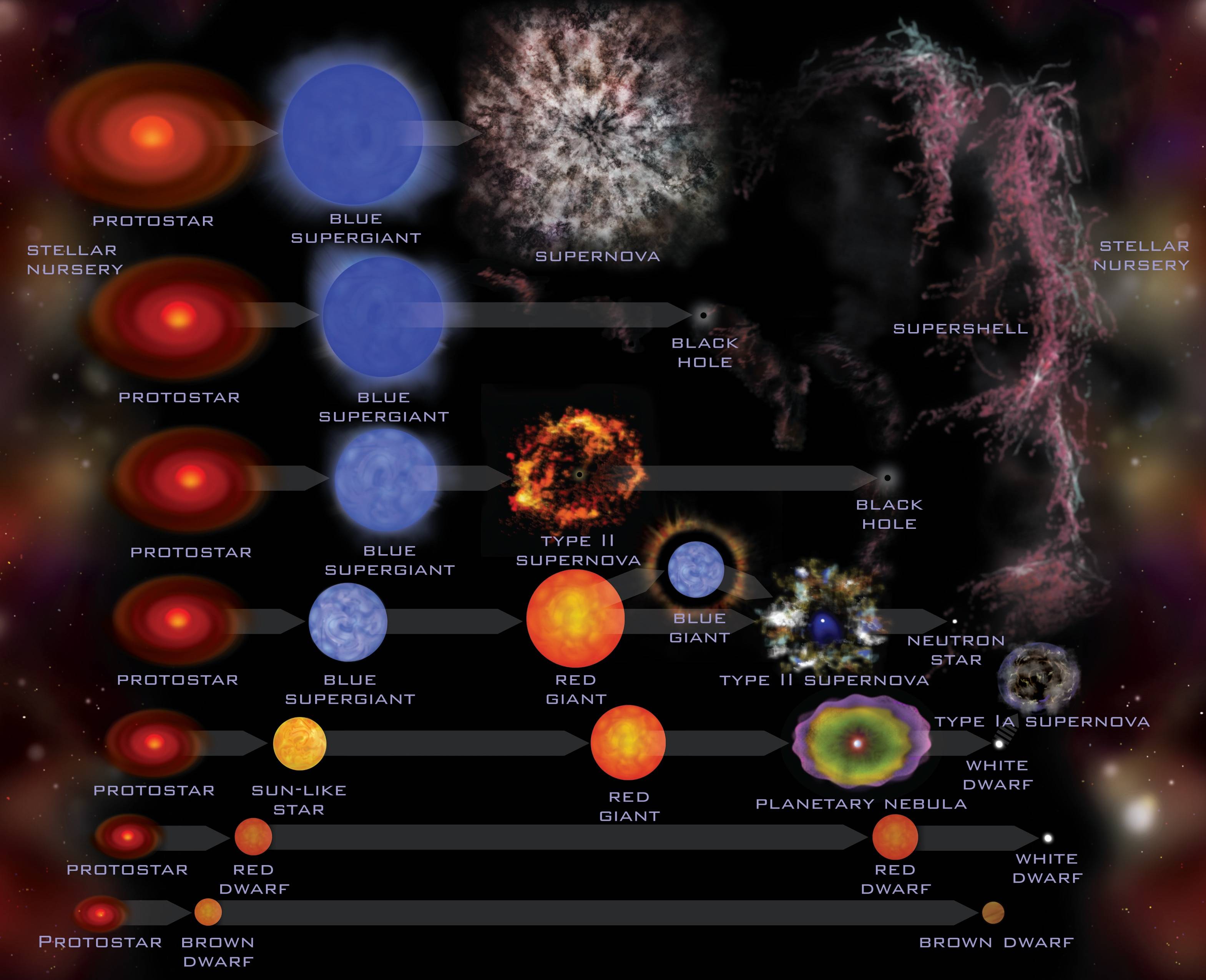 Mass increases from the bottom left corner to the top left and time is increasing left to right on the bottom. Not every allotment of matter that becomes a star evolves into another allotment to the next cycle, some remains condensed for extended periods of time and some is expanding and lost to the area; with expansion of the universe the non-increasing supply of matter is reallocated to an ever increasing amount of space.

The process does not continue indefinitely. Most main-sequence stars become white dwarfs, where they held up by primarily electron degeneracy and cool off forever.

More massive stars evolve in neutron stars (supported by neutron degeneracy), while the most massive become black holes --- which are supported by nothing. Gravitation collapses them into a point.

Not the answer you're looking for? Browse other questions tagged energy gravity stars supernova gravitational-collapse or ask your own question.

4
What determines the outcome of a supernova?

13
Is Gravity Energy?
1
So gravity turns things round
6
Does relativistic mass exhibit gravitiational effects?
5
Gravitational binding energy of a white dwarf at Chandrasekhar limit?
0
Relationship Between Acoustics and Gravity?
2
Gravitational collapse (conservation of energy)
1
Use of wormholes to violate conservation of energy
2
Doesn't expansion of space not allow a perputual motion?
4
How come gravity generates enough pressure to start a fusion reaction in stars even though it is the weakest force?