Torque required by a motor: using a counterweight to reduce?

I have a motor and gearbox that is rated for a certain amount of torque in newton meters. Its primary load $M_1$ is connected by a rigid rod (assumed massless) length $L_1$. So I reckon the (max) torque required is $L_1 {\times} M_1 {\times} g$, achieved at the rotation angle that's directly perpendicular / furthest out from the motor+gearbox. 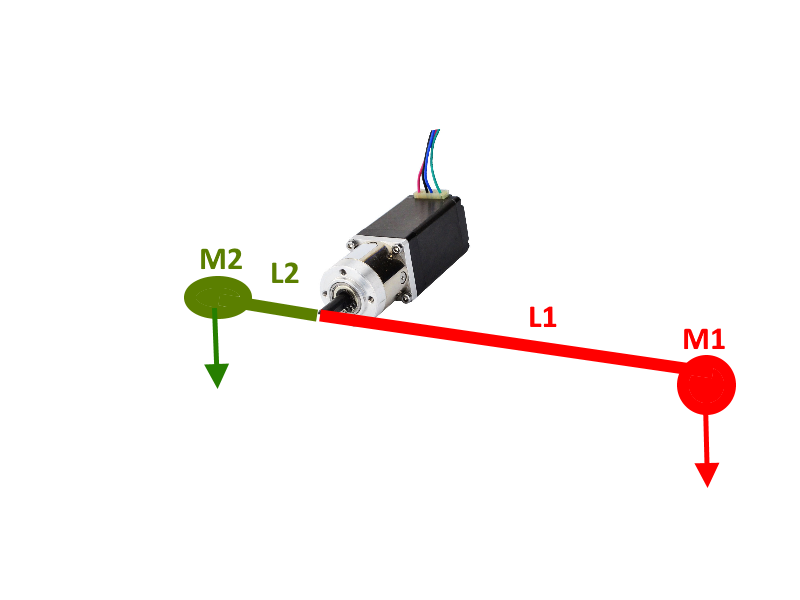 Torque $\tau$ is related to angular acceleration $\alpha$ by the equation:

The moment of inertia opposing acceleration by the motor's torque will therefore increase due to the additional mass $M_2$ by the amount: $I_{incr} = M_2r_2^2$

Practically, this means that while you will now be able to get the motor to lift $M_1$ because it is counterbalanced by $M_2$, applying torque to lower $M_1$ from any position from which it can be lowered, and for an equivalent torque, will now result in less angular acceleration. Your system will be more 'sluggish', i.e. it will be less responsive.

Yes, your torque formulation is correct.

In the figure below we analyse motion of $M_1$, in the right hemisphere. The analysis applies for the mirror image case in the left hemisphere. The torque required to lift $M_1$ is proportional to $cos\theta$, where $\theta$ is the angle between the vertical (mass weight) and the direction of action of the torque. Without $M_2$, the motor would not be able to lift $M_1$ between some points $A$ and $C$, since $cos\theta$ would be high, close to $1$ near $\theta = 0^o$ (horizontal shaft position). The addition of $M_2$ will facilitate upward motion of $M_1$ between $A$ and $C$, a positive thing.

The negative effect of adding $M_2$ is that all acceleration to lower $M_1$ (red arrows in figure) will necessary require longer acceleration time since $\alpha = \tau / I$ and $I$ is now larger. Changes in rotational direction will also take longer because of the higher angular momentum to be overcome. There will be a larger time lag between changing torque direction in the motor (by electrical control), and the masses changing direction. This delayed response is called sluggishness. 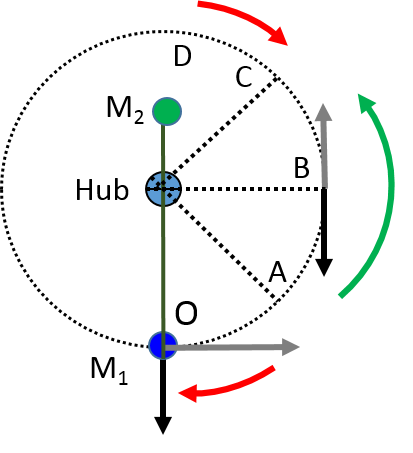 2
Torque Required For a Motor to Move an Object on Wheels?
0
DC Motor Torque Constant
2
Vibration to Torque: Magic Motor
1
Physics of a reaction wheel behind a gear chain
0
Torque and angular acceleration , moments , counterweight
0
Motor and Pulley torque contradiction
3
What are the maximum spring lengths of a double spring pendulum?
0
Understanding of a pendulum with (perpendicular) moving masses