How did Jocelyn Bell aim her radio telescope (phased array)?

The pulsar was found to be in the constellation Vulpecula. How did she locate the pulsar? In other words, how do you aim a two hectare radio telescope consisting of posts and wires?

EDIT. I'll try to make my question clearer. I'm not a physicist and know zilch about radio telescopes. However, I've driven past the Mullard Radio Astronomy Observatory near Cambridge several times and seen their radio telescopes - a bunch of mini Jodrell Bank-type dishes. Now even I can imagine how you can aim one of these dishes towards a particular point in the sky. You crank the handle and point the dish to your target star or whatever, like you'd set up a TV satellite dish. What I cannot understand is how Jocelyn Bell was able to use a field of posts and wires to accurately locate a pulsar in Vulpecula. I've read that "The [radio telescope] output appeared on four 3-track pen recorders, and between them they produced 96 feet of chart paper every day." How did she know what portion of the sky these chart results referred to? I'm not asking for a technical explanation, just a plain English description of how she could home in on a particular point in the sky. Don't worry about making it too simple.

Jon Custer gave a correct technical overview; I'll have a go at a bare-bones conceptual description. The idea is to record the amplitude at each receiver in the array at a series of times, and then to offset the signals from the different receivers in time and look for a correlated signal. From the offset applied to get a correlated signal you can use simple geometry to get the angle to the source. I'll walk through it with a diagram: 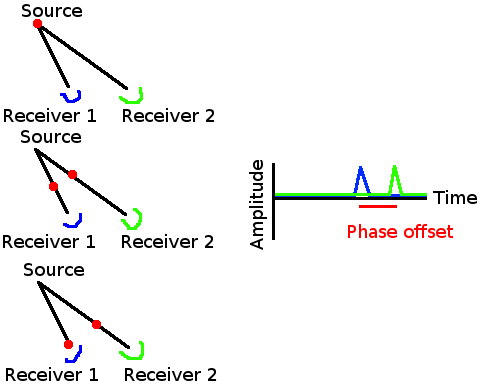 On the left I show three time snapshots of a source emitting some signal (red dot). The source is a bit further from receiver 2 (green) than receiver 1 (blue), so the signal arrives a little bit later at R2. This is shown in the amplitude-time graph on the right. If the blue curve is offset to the right it will eventually overlap with the green curve, which would show up as a strongly correlated signal. The phase offset is, in other words, the time delay between the arrival of the signal at the two detectors. The time delay multiplied by the speed of light is the difference in the distances to the source seen by the two receivers. If this difference is zero then the source must be directly "above" and between the two detectors; the larger the difference, the larger the angle from this reference direction to the source.

Scale this up to more receivers spread out in two dimensions and you can locate a source on the sky. Of course there are some "technical details" which make this a bit harder to actually implement, but the principle is basically as above.

A phased array is an array of antennas which emits a beam of radio waves which are steered to point in different directions by adjusting the phase alignment of different rows and columns. But the same equipment can receive signals similarly.

Usually, a phased array sends pulses from different dipoles at phase differences, which eventually causes the beam produced to point in a certain direction. Kyle Oman's answer describes the way the Interplanetary Scintillation Array, which was used by Bell, uses the phase difference between signals to process a direction.

A misconception which I think led to the question is the idea that the dipole antennae were angled physically like cable TV dishes to focus on a particular region in the sky. The whole telescope wasn't physically turned and angled to focus on a particular region. It was designed to be able to scan a certain region of the sky, i.e. it was designed such that it gets the best look (highest sensitivity) at areas with a declination of approximately +30°. This was 'sweet spot' set up by using a reflective screen. There's nothing particularly specific to that: the position of the reflective sheets allows you to send the beam from the dipoles to different regions, but the sensitivity decreases as you deviate from +30°.

After this, the reverse of phase shifting processing techniques lets you find the direction of the received beam. The wikipedia page on phased arrays tells you about how a 2 dimensional array lets you sweep the areas with multiple degrees of freedom.

In essence, the telescope used a static structure of dipoles, and then used signal processing techniques to compare the results from different individual dipoles to locate the region of activity.

@lalala pointed out in a comment that one way to understand how phased arrays work is by comparing them to the way ears deduce the direction of a certain sound. See Wikipedia: Interaural time difference

The aerial consists of a rectangular array containing 2,048 full-wave dipoles arranged in sixteen rows of 128 elements. Each row is 470 m long in an E.-W. direction and the N.-S. extent of the array is 45 m. Phase-scanning is employed to direct the reception pattern in declination and four receivers are used so that four different declinations may be observed simultaneously. Phase-switching receivers are employed and the two halves of the aerial are combined as an E.-W. interferometer. Each row of dipole elements is backed by a tilted reflecting screen so that maximum sensitivity is obtained at a declination of approximately + 30°, the overall sensitivity being reduced by more than one-half when the beam is scanned to declinations above + 90° and below - 5°. The beamwidth of the array to half intensity is about ± 1/2° in right ascension and ± 3° in declination; the phasing arrangement is designed to produce beams at roughly 3° intervals in declination.

Not the answer you're looking for? Browse other questions tagged astronomy telescopes radio pulsars or ask your own question.

8
Where can I find information for how to create amateur radio telescope?
3
Antenna Array Radio Telescope
7
Why were pulsars not discovered in the visual spectrum?
0
What’s the difference between fields of view (FoV) and instantaneous field of view (IFoV)?