How can an affine geodesic exist on a curved manifold?

I'm reading Inverno's "Introducing Einstein's Relativity". I think I understand how the author derives the affine geodesic equation. He considers the tangent vector to any curve as the vector field. Then he demands the vectors at any two adjacent points on the curve to be proportional by a scalar which is generally a function of the parameter u and the equation is derived.

Obviously, any straight curve on a flat manifold satisfies his demand, since the tangent vector to this curve always has the same direction irrespective of the parameter. But what if the manifold is not flat? Then we can never find a curve on it whose tangent vector undergoes no change in direction. Therefore, it seems to me that the solutions to the equation are just the straight curves in case of flat manifolds, while there are no solutions in other cases.

My question is: by "affine geodesic", what are we really meaning in case of non-flat manifolds? Can one ever generally imagine the curves that we talked about while deriving the equation?

I'm not sure about your first paragraph, so ill answer to the 2nd.

In flat space, a geodesic is a straight line - a movement in constant velocity without acceleration. You can easily write the geodesic equation - $ \frac {d^{2}x}{d^{2}\tau }=0 $.

When one tries to generalize this notion to manifolds - the fundamental question "What is acceleration" arises. "What is velocity" is clear - take a curve, the tangent to the curve is the velocity at each point. If you try, naively to pick a coordinate chart and calculate $ \frac {d^{2}\gamma }{d^{2}\tau } $ for the curve, you will get an answer which is not coordinate independant - meaning, pick another chart and calculate the same thing, and get a different tangent vector.

However, there is a mathematical machinary invented for taking derivatives of vector fields on manifolds and getting invariant answers - the connection (or covariant derivative, or Christoffel symbols on a chart). This is an extra structure one has to introduce, which allows given a vector field $Y(x)$ and a vector $v\in T_pM$ to calculate the derivative of the field wrt the vector at the point - $\nabla_{v}Y\in T_{p}M$.

This is in some sense the definition of "what are the flat lines on a curved space", and the equation $\nabla _{\dot \gamma}W=0.$ is the definition of "a vector field W which point in the same direction as we move on the curve $\gamma$, even though we are in a different tangent space" (parallel transport).

This is a nice illustration demonstrating this, taken from the wikipedia article on parallel transport. 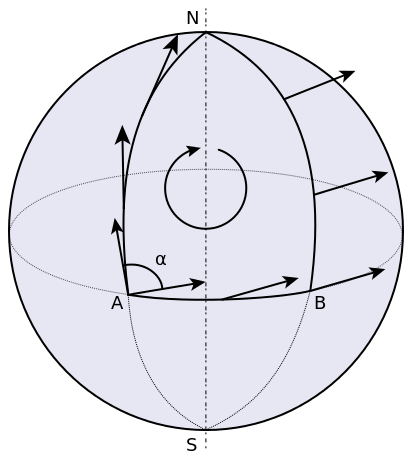 (There are of course issues of checking this is a well defined object as the velocity is not a vector field on the manifold, but only on the curve).

The final important point is - how does one choose a connection? Well, in GR, the manifold comes equipped with a metric $g$, and there is a theorem that tells us that in the presence of a metric, there is a natural, unique choice of a connection which is compatible with the metric is some sense.

79
What does general relativity say about the relative velocities of objects that are far away from one another?
9
Geodesics in $\text{AdS}_3$

1
Can someone explain how Weinberg's definition of the affine connection for the geodesic equation matches the definition of an affine connection?
1
How do I interpret this statement?
2
Why can we choose affine parameterization?
3
Geodesics and constraints on the parameterization
2
Affine and metric geodesics
2
Are Riemann normal coordinates one to one and why can't they be defined in the presence of torsion?