How can the system of dielectric and metal plate be treated as a capacitor?

Consider a simple parallel plate capacitor with two dielectrics between it: 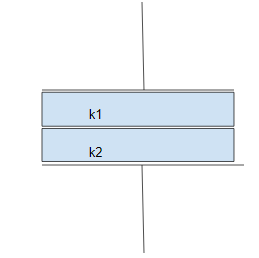 I would like to know how each of these two combinaions (metal plate with dielectric) can be treated as a separate capacitor. The condition for qualifying as a capacitor is that the upper surface of k2 should have the same magnitude of charge as the lower metal plate. Is that condition fulfilled here? How?

The interface between the dielectrics $k1$ and $k2$ is an equipotential so placing a conductor (with no electric field inside it) along the interface does not change the distribution of charges on the top and bottom plates of the original capacitor.

That conductor at the interface can be of any thickness as long as the thicknesses of the two dielectrics are unchanged and could be two conductors connected with a wire which is recognisable as two capacitors connected in series.

Update as a result of comments and chat with @Abcd

An extension of this example would have two dielectrics and a metal "dielectric" sandwiched between them.

If the middle plate is absent there would be an electric field at this position of $E = V/d$ where $V$ is the potential difference and $d$ the distance between the two plates. There are then charge $+q$ and $-q$ on th etop and th ebottom plate, respectively. If the conducting middle plate is present then charges in this plate are displaced to precisely cancel $E$ at its position, so $E=0$. This means that a charge $-q$ moves to its top side and $+q$ to its bottom side.

Effectively we now have two capacitors in series, but each has double the capacity of the original single one, as the plate distance is $d/2$. The total capacity is therefore unchanged and the metal plate in the middle has no effect.

Not the answer you're looking for? Browse other questions tagged electrostatics electric-fields capacitance dielectric or ask your own question.