Explanation of the classic jerk and pull string system [duplicate] 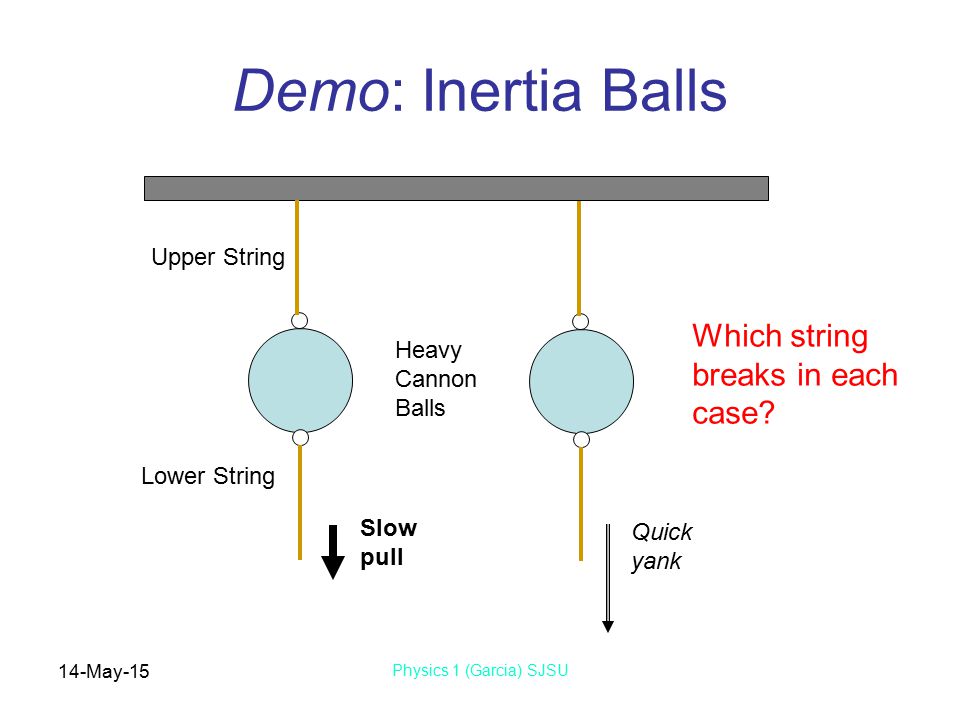 It is known that when we jerk the bottom string quickly, it will break; and if we pull slowly the top string will break, while the force applied is the same.

My confusion is: according to Newton's first law, an object will remain at rest or at a constant velocity when the net force acting on it is zero. However, in the mass-string system, the mass remained at rest despite the fact that the downward force exerted on the mass, in turn, on the top string exceeds the maximum tension that the string can withstand (as it caused the second string to break). So does this imply that not all the force applied on the bottom string are exerted on the mass (as the tension in the top string is lower than the bottom one)? If so, where did the force go? And why is that when the force is exerted over a longer period of time this disparity between the force applied and the force experienced by the top string seems to vanish?

Essentially, why is the tension in the top string smaller than the bottom one when jerked quickly?

I understand that it has something to do with inertia, but how exactly does inertia "keeps the strain below the weight"? Please explain with details.

This is my first post, thanks for any help I can get!

The tension in the top string is entirely given by the distance between the ball and the support! Think of that string as a very stiff spring.

To increase that tension, the ball has to move down. Just a bit, not much, but it does have to move to stretch the string.

If you pull slowly, the ball has time to move and does, then the upper string breaks.

If you pull fast, there’s no time for the ball to move and stretch the upper string to its breaking point before the lower string is broken. The extra tension in the bottom string puts a net force on the ball, but that just causes it to accelerate, not move instantly. In the small time before the lower string breaks, it builds up a tiny bit of speed, but not yet any net displacement.

Not the answer you're looking for? Browse other questions tagged newtonian-mechanics inertia or ask your own question.