How do we identify distant radiation sources?

I was reading this question and the answer cites a page which discusses the identification of an x-ray source very far away. I'm a nuclear engineer and based on my understanding of radiation detection, I don't understand how this is possible.

If radiation comes from a far distance, I would expect it to be a very low flux as it radiates isotropically from the source, so over astronomical distances the odds of detecting a particle decrease. In order to identify the incident vector of a set of particles, we need to detect at least two from the same source. Based on where those particles are detected within our detector (or detector array) we can back calculate a point where they both came from (if we assume neither had interacted previously). With enough particles and a large enough detector array you can theoretically do this out to an arbitrarily large distance. But this is complicated by several factors:

All of these technical challenges considered, I don't understand how we can reliably find distance sources of cosmic radiation with any level of precision. This article describes an array the size of Rhode Island, and even with this massive array of detectors there is tremendous trouble identifying the source.

electromagnetic-radiation radiation particle-detectors
Share
Improve this question
asked May 18 '18 at 13:50

The false color image shown below was captured by the Chandra X-ray Observatory. The colors in the image correspond to three different X-ray frequencies. 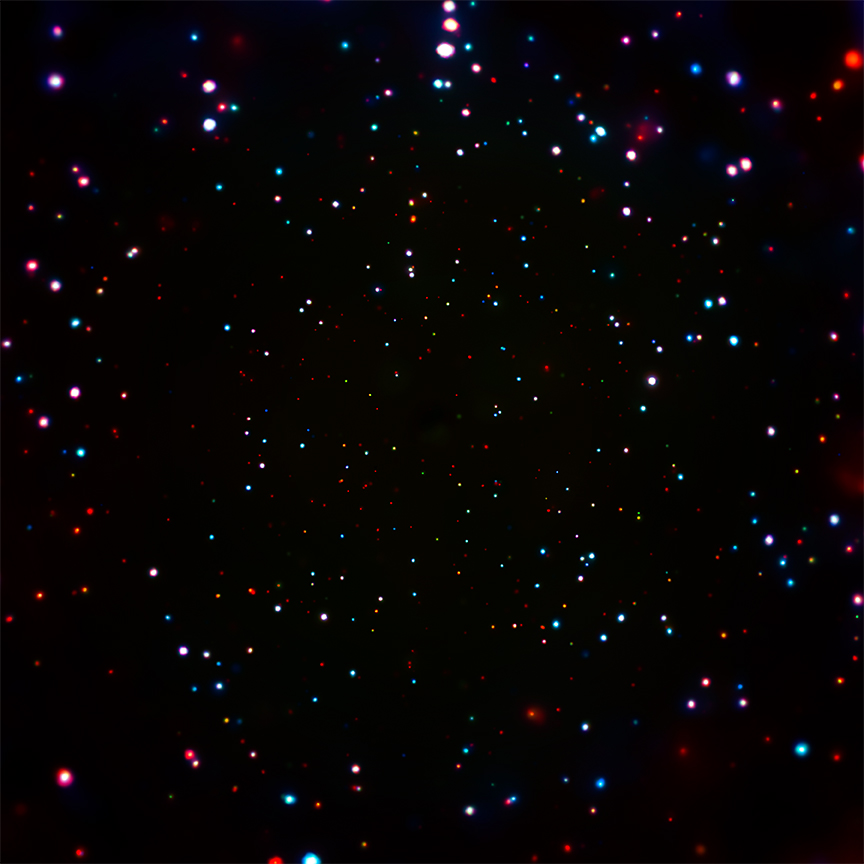 This image is from the Chandra Deep Field-South and represents over 7 million seconds (over 81 days) of cumulative observing time by Chandra. This patch of sky contains no nearby objects. The objects in this image are 9 to 11 billion light years away. (Better: The X-rays from those sources traveled for 9 to 11 billion before being detected by Chandra.)

If radiation comes from a far distance, I would expect it to be a very low flux as it radiates isotropically from the source, so over astronomical distances the odds of detecting a particle decrease.

First off, the assumption of isotropic radiation is not a good one for non-thermal sources. Pulsars, for example, have markedly non-isotropic radiation. Pulsars were first identified in the radio frequencies, but some pulsar are strong emitters of X-rays.

That said, since even the most non-isotropic of sources will still have a nonzero beam width. Even at the center of the beam, the radiation should fall with the square of distance (in the far field). Some of the faintest sources in the above image represent about one photon being captured per every four days. That's why it took over seven million seconds of cumulative operation to build up the above image.

So yes, the flux from very remote sources can be rather faint. That doesn't mean it's undetectable.

I don't understand how we can reliably find distance sources of cosmic radiation with any level of precision.

Estimating distance is always a problem in astronomy, regardless of wavelength. It helps to have observations from across the electromagnetic spectrum. The Chandra Deep Field-South, for example, points at the same patch of sky as does the Hubble Deep Field-South. It also helps to have "standard candles". These are sources of electromagnetic radiation that provide a good estimate of distance.

Not the answer you're looking for? Browse other questions tagged electromagnetic-radiation radiation particle-detectors or ask your own question.

40
What is the evidence for a supermassive black hole at the center of Milky Way?

4
Does a Photon leave trace in a silicon tracker?
5
Is a DIY neutrino detector feasible?
17
Same photon or different photon?
1
How do we filter out radiation from galaxies from the cosmic background radiation?
1
Cherenkov light reverse cone direction
0
$\rm NaI$ detector rate dependence on distance
2
What is the probability distribution for the detection times of radioactive emissions from a radioactive sample?
2
Why can't indirect ionisation be seen in the silicon tracker of a HEP particle detector?