Why can a wave be expressed with a sine function?

I see many expressions which express waves with the sine function like $y=\sin(kx-\omega t)$.

waves fourier-transform
Share
Improve this question
edited May 17, 2018 at 21:06

In order to understand in a simple way, the way the waves, that you are considering, behave in a similar way to the functions of a sine wave.

They have properties similar to them and so the sine and cosine waves are the easiest of the periodic functions to represent them. It's not that exactly that shape will apply to waves. It's not a compulsion that waves are represented only in the form of sine curves.There are many waves which don't have a shape like that, especially triangular waves and rectangular waves. But, this periodic function makes representation a lot more easier.

It is much easier to understand the properties of waves when we use sine and cosine graphs to describe them.

They closely represent these waves in their propagation.

If we want to do math on the waves we are talking about, we will have to get a grip on these periodic functions. What would really help is a way to simplify them. Fourier analysis let us do exactly that. We can take a complicated periodic function with some really annoying math and break it down into simpler periodic functions where the math is much easier.

If I were to use the $tan$ function for this specific representation then since you know the tan graph is discontinuous at many points it cannot possibly represent a wave... and hence sine and cosine representation come close enough for this representation.

The simplest periodic functions are sine and cosine. They are virtually the same thing and are closely related.

Fourier theory -- any function$$\tilde{f}(k):=\int_\mathbb{R}f(x)e^{ikx} dx$$ can be decomposed into an infinite sum of sines and cosines. Since this is the case and dealing with sine and cosine is mathematically simpler than the general case of periodic functions, why worry about the latter, when you can always express any function as a sum of sines and cosines, and a solution in this form is completely isomorphic with the general case.

But does this guarantees that expressions that show waves movement can be sine or cosine function? Is this just a kind of approximation?

It is all about modeling data. Any periodic function can be modeled with sines using the Fourier expansion series so in this sense if not a pure sine wave, one can fit the physical wave with an approximation of sums of sines.

One of the simplest ways to get waves is to have a situation where force is proportional to location: $F=kx$ for some $k$. Since force is mass times acceleration, and acceleration is the second derivative, the one-variable case gives $x'' = \frac{k}{m}x$. If $k$ is negative, then $x = \sin{\left(\sqrt{\frac {-k} m}t\right)}$ is a solution. More complicated wave equations can have other solutions, but this is the base case. Also, applications of the wave equation often allow for superpositions of waves, in which case the motion is the sum of multiple sinusoidal functions, and the full function may not look like a sine wave.

One reason that sine waves appear in nature is that in many physical systems, we can express a general wave as a superposition of sines and cosines of all frequencies, but different frequencies travel at different speeds. This means that even for a messy source of waves, initially looking nothing like a sine wave, observers far away will, at any given time, only see one frequency, and this will look just like a pure sine wave.

We can justify superposing waves and treating different frequencies independently (a linear approximation), when the waves appear as small fluctuations around some equilibrium situation. For example, a flat ocean is in equilibrium, and small disturbances to the surface propagate as waves as gravity acts to restore equilibrium. Mathematically, the sine and cosine waves appear as the natural building blocks of this linearised approximation because they have simple behaviour under differentiation: the slope of a sine is a cosine, and vice versa.

The specific model of the physics then tells us, for any given wavelength (or wavenumber $k$), the frequency $\omega(k)$ (depending on $k$) at which they oscillate/propagate. This is the dispersion relation for the system at hand. For example: $$\omega \left(k\right) \begin{cases}= \sqrt{g k} & \text{for waves in deep water} \\= c k & \text{for light or sound} \\\propto k^{3/2} & \text{for capillary waves} \end{cases} $$ The last example here happens for small water waves (size around millimetres or smaller) where the main restoring force is surface tension, rather than gravity, as in the first on the list.

The speed at which a given frequency propagates is given by the group velocity $c_g=\frac{d\omega}{dk}$, which for the examples given above is proportional to $\frac{1}{\sqrt{k}}$, $k^0$ (constant), and $\sqrt{k}$ respectively. This shows three qualitatively different behaviours: longer wavelengths (smaller $k$) go faster, all wavelength travel the same speed, or shorter wavelengths go faster.

Any surfer will be able to tell you that when there's a storm across the ocean, and new swell comes in to the beach, the first waves that arrive are always the largest period, longest wavelength, and then as the hours and days pass they get progressively shorter period! The reason that there is a well-defined period, and they look like sine waves (at least until they get too close to the beach and the seabed starts interfering), is precisely this dispersion phenomenon. If you make small waves on a pond/bath with your finger, you may be able to see the opposite phenomenon where the shortest wavelengths spread out fastest.

Sound does not have this dispersion, since all wavelengths move at the same speed. If you play a short burst of white noise on a speaker, with no well-defined frequency, you will hear white noise, even far away, because the different component frequencies will not separate out. The sound waves will then never look anything like sine waves!

In any case, if you make a splash, the surface of the water will be messy at first, but the waves that spread out will look like nice clean sine waves with well-defined peaks and troughs, because all the components of the original mish-mash of wavelengths travel at different speeds and separate out from one another.

The travelling wave can have any continuous and differentiable shape, as can be shown by checking that the general function $f\left(x-ct\right)$ satisfies the wave equation (as does the one moving to opposite direction.

The sine and cosine solutions are useful just because a wave of any shape can be constructed by summing an appropriate set of them together, as in Fourier series/integral.

There's no rule that waves have to be sinusoidal in nature. Some waves show different waveforms, and tonnes of waves aren't even continuous and hence aren't described by sine functions.

But it's useful to model most continuous waves in this manner because trigonometric functions are the easiest periodic functions (easiest to use).

A simple example to prove this is a square waveform. It's not common in mechanics, but it plays a big role in circuits for computation. The equation is $A\times sign(\sin\omega t)$, where the $sign$ function is self-explanatory*. There's nothing 'sine-like' about the wave, but we still see $\sin$. This is useful because the sine function will alternate between positive and negative values periodically.

We can use trig functions to model a huge number of other curves. For example, triangle waves are drawn with an infinite Fourier series: $\sum_{i=0}^N(-1)^in^{-2}\sin([nt])$ There's no need to critically examine this equation, but what's important is that as $N$ becomes larger, the equation is a better approximation, which is something the question focused on. Using trigonometric expressions, we're able to apply similar Fourier transforms to approximate almost any waveform.

This is a slightly different interpretation of the question...

These aren't always approximations. A lot of waves actually follow a sine graph, so we can prove that sinusoidal motion is a real thing in nature.

The easiest example to prove this is a pendulum in simple harmonic motion:
$\hspace{175px}$ 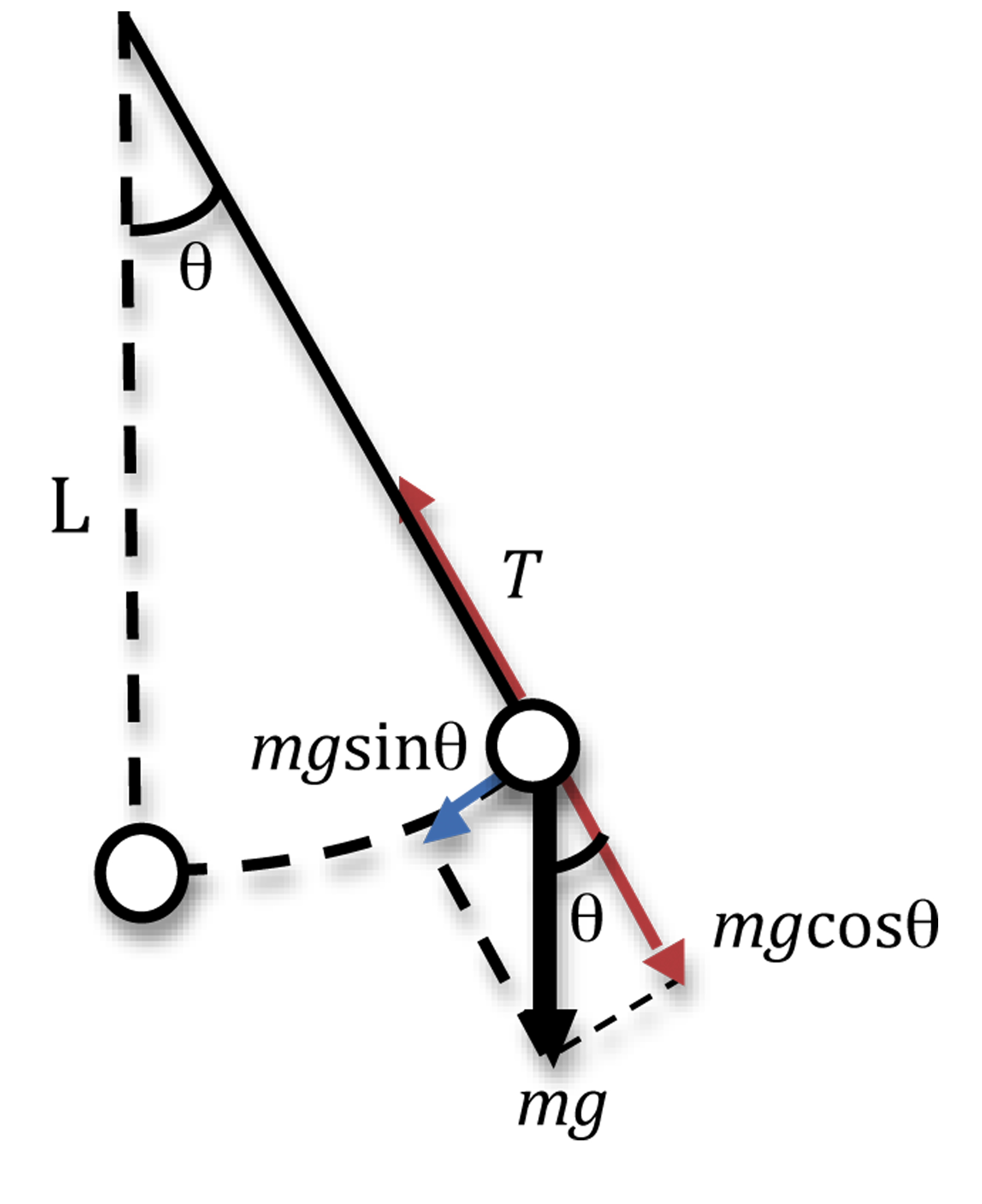 You can easily find a derivation of the corresponding equation $x=A\sin(\omega t)$ online. But the important thing is that we resolve the gravitational force into the components, using trigonometry, to get $F=mg\times \sin(\omega t)$. This is directly proportional to negative displacement, hence displacement in SHM truly shows sinusoidal motion, no approximation needed.

Several waveforms, including those for standing waves, are developed through the manipulation of this formula, but for some things, we need to approximate several sine waves together using Fourier transforms; other answers explain that idea.

Not the answer you're looking for? Browse other questions tagged waves fourier-transform or ask your own question.

62
Are there pure sine waves in nature or are they a mathematical construct that helps us understand more complex phenomena?
5
Why can waves (audio, eletromagnetic, etc.) be represented by a circle?
5
Why are AC quantities represented by sine waves always?

7
Sinusoidal Wave Displacement Function
0
What is the theoretical/intutive meaning of $x(t) = x_0 \cos ( \omega t + f )$?
2
Can we represent Simple Harmonic function as triangular waves?
1
Why use different arguments to plot a sine wave?
2
What is the need of complex functions in wave analysis?
2
Is a spring shaped like a sine wave?
5
How to calculate the phase and group velocity of a superposition of sine waves with different speed and wavelength?
0
Fourier transform of sine function