Where will pressure be stronger in these 2 pipe scenarios?

I initially started to be interested in fluid pressure and pipes to learn electricity. It seemed the only way I could help my head to get around some electrical concepts.
That's the reason of my previous question.
Anyway I would like to understand how fluid molecules behave in pipes on a deeper level, at least as much as I can, given my poor background.
I drew this 2 pictures, hoping that they will help to illustrate what is a doubt that I currently have.

I imagined 2 vessels connected by a pipe. The highest vessel is coninuosly alimented with new water. Water in excess flows down on the sides.
Water will try to reach the same height in both vessels, so some water will pour out of the shortest one and will be collected by the water collector.
The 2 figures are identical apart from the shape of the pipe distance d:

Given that we know all we need to know to calculate the pressure at point A, B and C ( Picture 1 ) and A' and C' ( Picture 2 ). I would like to know the difference in pressure between C and C', if there's any and why it's there. I'd love to hear an answer that explain everything in terms of water molecule's behaviour, if it's reasonable.

What is going to be different is the flow rate.

The flow through a length of pipe could be approximately determined using the Poiseuille's law:

This law relates the flow rate Q to the pressure gradient (or difference) $\Delta p$, viscosity $\eta$, length of the pipe L and the radius of the pipe r.

We can rewrite this equation as follows:

You can see that this law is analogous to the Ohm's law, $I=\frac {\Delta V} R$, where the force of pressure corresponds to the voltage and the flow rate corresponds to the current. In fact, for analysis of the flow in the pipes, we can use well familiar techniques developed for electrical circuits.

Adding some details to to address additional questions in the comments.

Below are the diagrams for the two cases and their the electrical analogs. 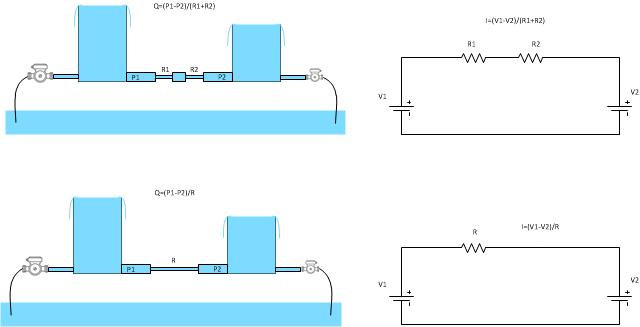 The pumps are added as more direct analogs to the batteries: you'll need pumps to maintain the pressure in the vessels as the water leaves the left vessels and flows to the right vessel.

It is worth to note that, although it may appear to be logical, the analogy between the flow of fluids in the pipes and electricity is very limited and should not be extended beyond the simplest cases.

Not the answer you're looking for? Browse other questions tagged fluid-dynamics pressure water fluid-statics molecules or ask your own question.

1
Hydraulic analogy and pressure in pipes