How is dot or cross product possible using the del operator?

Yesterday in class my teacher told me that the del operator has a direction but no value of its own (as its an operator). So it can't be called exactly a vector. But in vector calculus we see that div $\phi$ is the dot product of the del operator and $\phi$. Also in Calculating curl we use the cross product involving the del operator.

If the operator isn't a vector, then how can we have a dot or cross product of it? What is the direction of the operator?

$\nabla \cdot \vec A$ is just a suggestive notation which is designed to help you remember how to calculate the divergence of the vector field $\vec A$. The notation is nice, because it looks like a dot product, but as you say $\nabla$ is not actually a vector.

which makes it easier to see that $\operatorname{div}(\bullet)$ is just an operator which eats a vector field and spits out a scalar field. Curl can be defined similarly, though it's a pain to write out in its entirety.

The striking similarity leads one to define the vector operator $\nabla$, whose components are just the partial derivatives ($\nabla_i = \partial_i$). However, as pointed out in the comments, this similarity does not generally hold up if you switch to a new coordinate system.

I love this question and was very curious about it, so I built on a 3blue1brown video to answer it with the video below. I’d argue one doesn’t fully understand/appreciate divergence, curl or Maxwell’s equations unless they get this. Here’s the nutshell version: 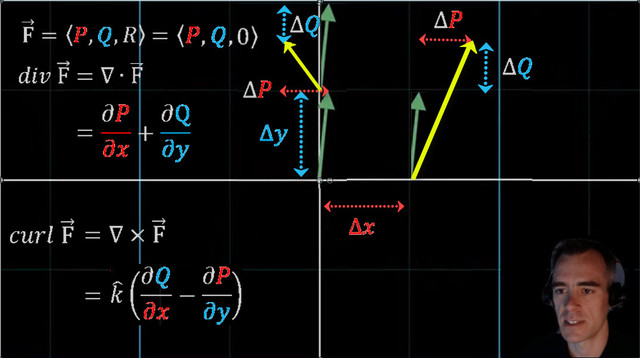 Not the answer you're looking for? Browse other questions tagged differential-geometry vectors differentiation vector-fields calculus or ask your own question.

1
Determine the flow and amplitude equation for thermal energy (with Del operator)
1
More Vector Product Possibilities?
5
Why are divergence and curl related to dot and cross product?
5
Definition of vector cross product
1
Vector calculus notation, maybe?
3
The strange character of operator $\nabla$
3
How do we Know Something is a Cross Product?
4
What is the physical phenomenon the vector cross product describes?
2
Laplacian of a scalar can be derived using definitions of dot product and gradient, can the Laplacian of a vector be derived or is it a definition?