How Much Do Spiral Arms Affect Their Galaxies' Rotation Curves?

According to Jerry Sellwood of Rutgers University, in the article What process creates and maintains the beautiful spiral arms around spiral galaxies?:

Fortunately, nearly every one agrees that spiral patterns extract gravitational energy from the field of a galaxy. The inexorable force of gravity tries to pull the stars in a galaxy closer towards the center. The gravitational force is balanced by the orbital motion of a star (like a stone whirled on a string) which generally prevents it from settling any deeper on average into the galaxy. The spiral arms are a kind of catalyst that brakes the orbital motion of some stars, allowing them to sink slightly closer to the middle. Those with technical training will realize that if some stars lose angular momentum others must gain equally and, in fact, the stars that lose are near the inner end of the arms while those at the outer end gain. The gravitational stresses arising from the spiral density wave provide the torque.

In other words, the spiral arms tend to reduce the rotational speeds in the central portions of galaxies and increase them in the outer regions.

I have not heard of this effect being considered when relating the rotation curves to the distributions of matter in the galaxies, so I'm wondering how significant this effect may be.

The "pattern speeds" of spiral arms and bars are typically of order 10-30 km/s/ kpc and to first-order independent of galactocentric radius. That means there is a co-rotation radius at some point and that stars closer than that orbits faster than the spiral arms and objects further out orbit slower. Importantly this is a density wave; it is not that the stars and gas are moving (much) faster or slower than objects that are not in the spiral arms but at a similar radius. In fact, the differences are small, of order 10 km/s.

Given that rotation curves (of external galaxies) are usually azimuthally averaged over the whole disk of a galaxy and that typical values of rotation speed in the outer (luminous) parts of spiral galaxies are 200-300 km/s, then this has little overall effect on the interpretation of a rotation curve and indeed, lumps and bumps in the rotation curves of order 10 km/s may be smaller than the errors in the observational data.

However, if you want to see the kind of detail you can go into, including looking at all the bumps and wiggles in a spatially resolved rotation curve and trying to interpret them in terms of spiral structure, you could look at McGaugh (2016). The image below, taken from that paper, shows efforts to model the detailed bumps and wiggles caused by spiral arms. 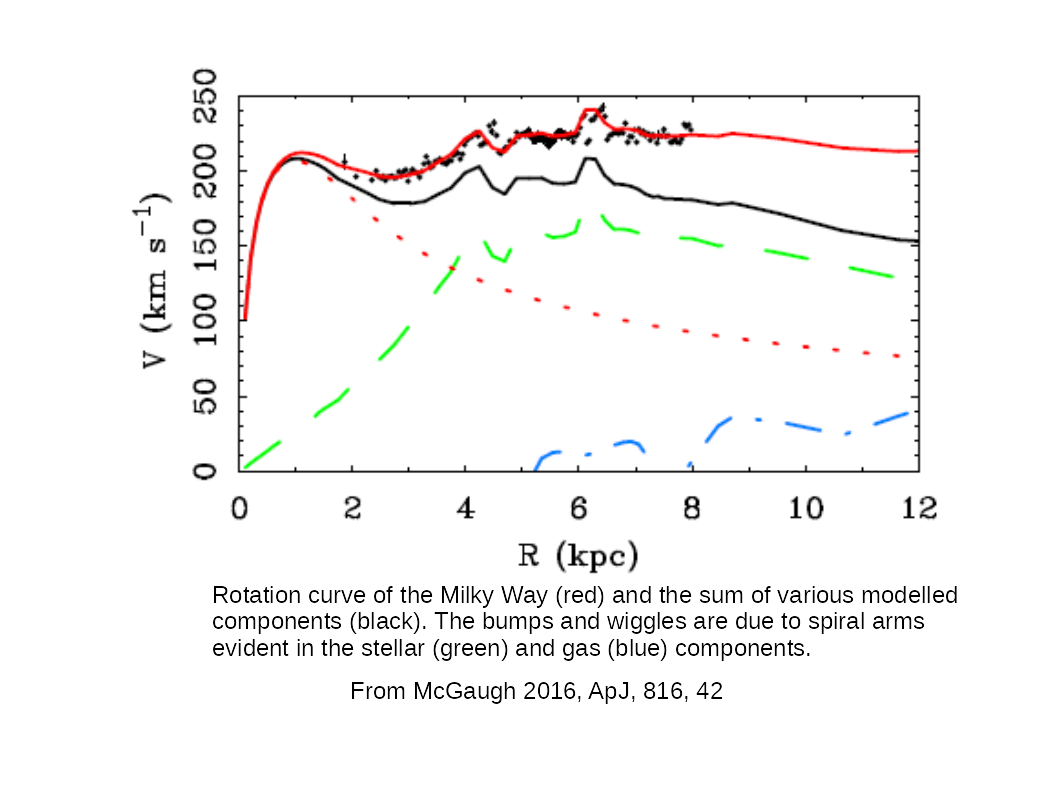 Further, if you are thinking about the effects of this on the need for dark matter, then consider that spiral structure is only really evident in the (comparatively) inner parts of a galaxy, where luminous matter dominates. The rotation curves extend well beyond the limits of most of the luminous matter.

Not the answer you're looking for? Browse other questions tagged angular-momentum astrophysics galaxies galaxy-rotation-curve or ask your own question.

1
Paradox from mass transfer in a close stellar binary

2
Formula for Rotation curves of Galaxies
25
How do spiral arms form?
0
Can one model a spiral galaxy with a similar manifold to one for a whirlpool?
1
Galactic Rotation Speeds - Ehrenfest Paradox, Gravitational time dilation, Dark Matter - all of the above?
0
Gravitation and the structure of galaxies
0
What models do physicists use in predicting the movement of stars in a galaxy that has lead to a wide-spread conviction that Dark Matter exists?
0
How can I plot Rotation Curves of Spiral Galaxies $v$ (km/s) vs $r$ (kly)?