Potential difference across a resistor

Why is potential difference across two ends of a resistor equal to the terminal voltage of the battery?

From Maxwell's equations, the circulation of the electric field in any closed loop is zero, when there is no changing magnetic field, as in this case. This statement is equivalent to "the electric force is conservative". 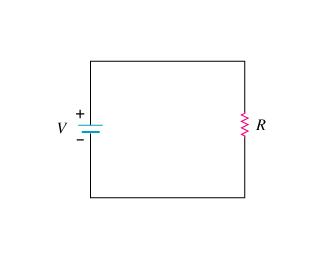 So, the potential difference across the resistor has to be equal to terminal voltage.

In short, since electric force is conservative, they must be equal.

Not the answer you're looking for? Browse other questions tagged electrostatics electric-circuits electric-current electrical-resistance or ask your own question.

1
Why does the potential drop across a battery and resistor equal the emf of the battery?