I am currently studying this example from the book "Introduction to Electrodynamics" - David J. Griffiths. 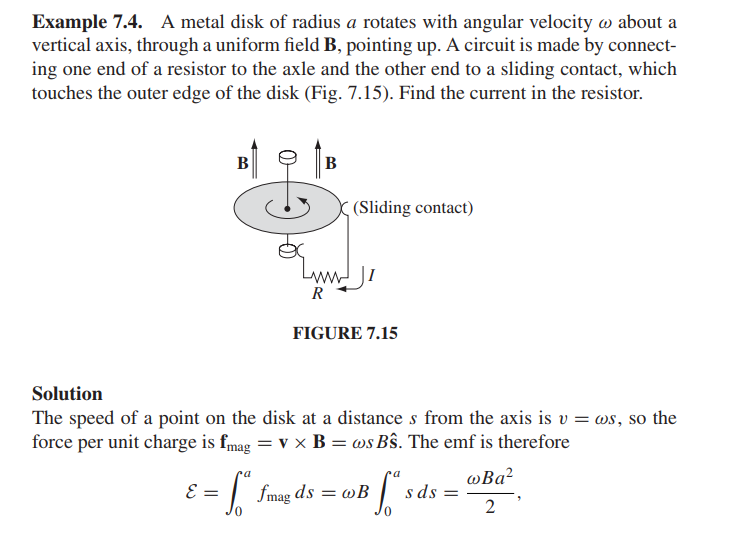 According to the solution, there is an EMF applied to the metal disk and also there is a current flowing to the resistor.

I was wondering why this happens, since dΦ/dt=0 (there is a uniform magnetic field and the metal disk doesn't change position, it only rotates).

I guess the EMF exists because of the fact that the disk rotates but I can not understand how the flux changes.

First, we could show this for a simplified case, when, instead of a disk, we'll have a ring with one spoke. The picture below shows a view of the setup with this modified disk, from the bottom. 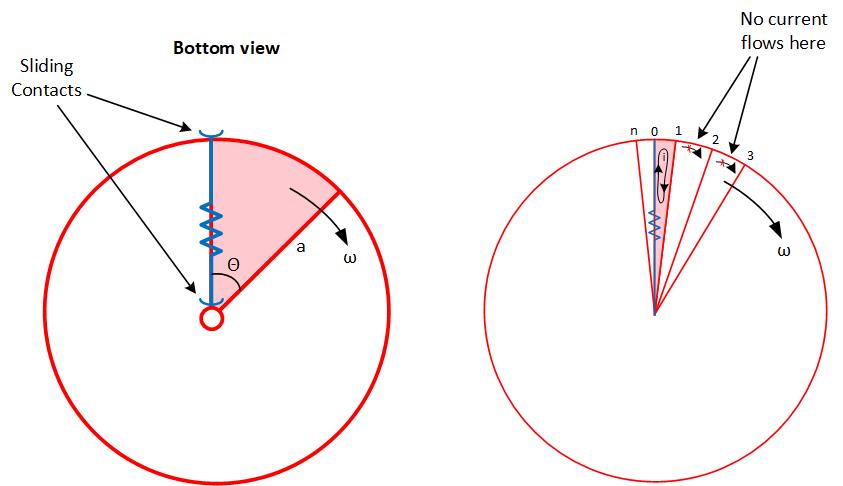 We can see here a projection of the circuit comprised of the stationary (blue) part, a segment of the ring and a moving spoke (red).

If we imagine that the disk consists of a large number of spokes, we can propose that the current will always flow through the spoke closest to the stationary part of the circuit, since this spoke will short the path to all downstream spokes. If so, the formula for the EMF, obtained for the simplified disk with one spoke, will be applicable to the unmodified disk.

One way to look at it would be to find force on the electrons on the disc. They are moving in a magnetic field, and so experience a force. To balance this, an electric field gets created –don't ask me how it got created – I just know there will be an electric field to keep the electron in equilibrium – it's how I solve these emf questions.

So, just consider an electron at a distance r from the center of the disc and equate the magnetic and electric forces on it to get the electric field.

Next, just integrate - integral E.dr to get the potential and there you go. Ta daa!!

The disc in your figure could be considered as being made up of large number of radial,conuducting ,differential elements rotating with angular velocity ω about the center of the disc.This is same as emf due to rotating rod which comes from motional emf.

Induced emf is the more general term. By Faraday's Law, you get an induced emf whenever there's a changing magnetic flux through a loop. If the changing emf is due to some kind motion of a conductor in a magnetic field, you would call it a motional emf. For example, if a loop moves into or out of a region of field, or rotates, or a bar rolls along a rail, you'd get a motional induced emf. But if the changing magnetic flux were due to, say, an increasing current in a wire, you wouldn't call it a motional emf.

Why does Motional emf change flux?

The reason could be that a potential diffference is maintained through the conductor as long as it moves through the uniform magnetic field.This is due to the electric field produced in the conductor due to movement of charges due to lorentz's force

Additional help from the website:https://webhome.phy.duke.edu/~schol/phy152/faqs/faq11/node2.html

4
Why is there no induced electric field in the experiment (Faraday's Law)
2
Is EMF generated instantaneously?
0
What is doing work in eddy current braking?
1
Why is magnetic flux used to measure induced emf? And some other questions on electromagnetic induction
0
Doing work against back emf
0
Magnetic flux and EMF - in an open circuit
0
Magnetic field of long cylindrical wire
0
What is $v(t)$ in a sliding conducting rail in a magnetic field?
1
Why is an EMF induced when the magnetic flux remains constant?