So I need some help with this question, which is formulated:

but I don't really know how to get the total magnetic moment of hydrogen. My guess so far is to compute the vector sum of

Lastly, I'm guessing that to answer the question "How many beams does hydrogen produce from a Stern-Gerlach analyzer with a weak magnetic field?", you just count the number of different values you get for the total magnetic moment?

You perhaps missed the most important stipulation in this context, that the hydrogen atoms are in their ground state. That means, the electron is in the $1S$ state, and the azimuthal quantum number $l = 0$, which means no orbital angular momentum with this stipulation. Since $\vert {\vec \mu_L} \vert \propto \vert {\vec L} \vert$, that means no magnetic moment from the orbital angular momentum part, and hence, no magnetic interaction due to this either.

Since ${\vec \mu_S} = - g_s {\vec S}$, where $g_s$ represents the spin gyromagnetic ratio for the electron, the anti-parallel relation between the two dictates that there are only two possible orientations of $\vec \mu_S$ w.r.t. $\vec B$. Upon passing through a Stern-Gerlach setup, there would be as many traces on the screen, as are the possible values of the product $(\vec \mu_S \cdot \vec B)$, which is 2.

On a sidenote, this question refers to the Phipps-Taylor implementation of the Stern-Gerlach experiment, carried out/published in 1927, which demonstrated the existence of "spin". If one ensures that the electrons in hydrogen atoms stay in the ground state only, which can done by cooling the atoms to a low temperature, the only source of magnetic interaction in the context can be the spin degrees of freedom of the electrons. (Of course, there is a caveat, there is also the magnetic interaction of protons in the nucleus with the external magnetic field, but nuclear magnetic moments are typically about 2000 times smaller than their electronic counterparts.) 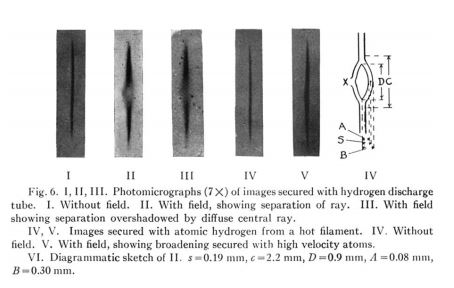 So, the two Stern-Gerlach traces in this case, invariably demonstrate the validity of the concept of "spin" as being real, and not just an abstraction.

Not the answer you're looking for? Browse other questions tagged quantum-mechanics homework-and-exercises quantum-spin magnetic-moment or ask your own question.

2
Magnetic moment of electron
2
Spin orbit coupling and fine structure of the Hydrogen atom
32
Why can interaction with a macroscopic apparatus, such as a Stern-Gerlach machine, sometimes not cause a measurement?
0
Why electron has spin angular momentum?