If we consider a null cone and a world line $\mathcal{C}$ we can define a 3-plane $\Sigma_P^{\,}$ called simultaneous hyperplane (world line) as the set of 4-vectors in the tangent space of Minkowski that are orthogonal, according to Minkowski metrics, to the tangent 4-vector to the world line:$$ {\large{\Sigma_P^{\,}}} =\left\{v\in T_P^{\,}M^4 : g\left(\dot{\mathcal{C}}, v\right)=0\right\} \,.$$ But how can we link this definition with the physical spatial present? The definition seems to have just a mathematical meaning and I am not able to understand how this definition leads to construct a 3-plane that corresponds to the spatial present as we know it.

Consider the 4-velocity OP of an observer at event O and the future-timelike branch of the "unit-hyperbola centered at O" (which is asymptotic to the null-cone of O).

That tangent-line intersects the null cone at events M and N, and P is the midpoint of MN. (This is related to a theorem by Apollonius.) So, since M and N are (according to OP) equidistant in space from P and since the light-rays from O to M and to N travel at the same speed, then OP would assign M and N the same time-coordinate (in fact, the same time coordinate as P)--- M and N are simultaneous according to OP.

To clarify this, consider the event Q "2 ticks after O along OP" and its past null-cone. This meets O's future null cone at M and N. (I call OMQN the "causal diamond of OQ".) By a radar experiment (emission at O and reception at Q), observer OP would regard M as simultaneous with P (as the midpoint of OQ), and the same for N... thus by transitivity for observer OP, events M,N, and P are simultaneous according to OP. 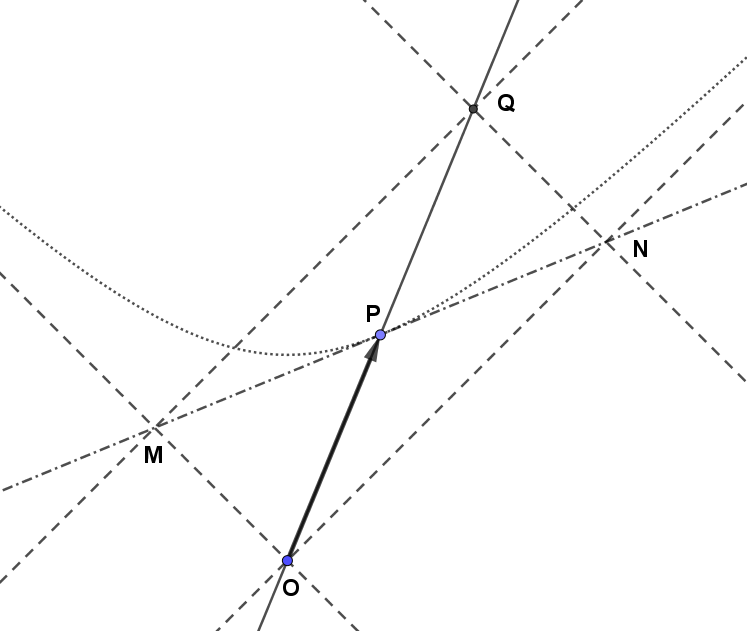 There is an interactive GeoGebra diagram that has a variation of this diagram at https://www.geogebra.org/m/HYD7hB9v#material/qAt9EQgd , which I developed into a way to draw spacetime diagrams on "rotated graph paper" so that ticks along observer worldlines can be visualized.

The orthogonality with the worldline (the t-axis) means $t=0$ (i.e. the present) -- you can show this by calculating a trivial dot product, or just realise it's obvious, since the axes are orthogonal.

If you have trouble understanding this, you might want to step back and review some basic linear algebra. In particular, you shouldn't be considering relativity in 4 dimensions right away -- think in terms of two dimensions, with the $x$ and $t$ axes and prove all the results this way before generalising stuff to 4 dimensions.

Not the answer you're looking for? Browse other questions tagged special-relativity spacetime metric-tensor relativity or ask your own question.