In response to a comment I posted recently to What's behind light?, @Emilio Pisanty wrote a statement that effectively asserts that the Fourier transform of a pulse provides results that are unphysical. His argument had two sub-assertions offered as proof:

Both are excellent points. However, they both suggest that Fourier transforms provide unphysical results - at least in this case. This is a bit distressing, because Fourier transforms are used throughout physics and it seems that they are considered to contain exactly the same information as, e.g., a straight temporal representation.

My question has two parts:

If you add a sharp filter then you'll get a long quasi-monochromatic 'tail' behind the pulse, but that's not the pulse itself you're seeing, it's the inertia of the filter itself, which takes a long time (inversely proportional to its bandwidth) to wind down.

Two specific cases come to mind, using femtosecond pulses which, as we know, can be filtered to produce longer, nearly-arbitrarily shaped pulses. In the first case, a diffraction grating spatially separates the femtosecond pulse into its spectral components. An aperture selects one or more sharp frequency bands which are focused by a lens back onto another identical diffraction grating. The components are all superimposed upon emerging from the diffraction grating, thereby re-forming the pulse, sans the frequency components that have been removed. The resulting pulse can be much longer than the original pulse.

The second case is the same as the first, but instead of diffraction gratings, prisms are used to separate the pulse into its frequency components and to recombine them into a resulting pulse after an intervening aperture removes some of the components.

The resultant lengthened pulse is identical in the two cases, if the aperture removes precisely the same frequency components. It should not matter how far the components are separated in the spatial domain, nor what material the apertures are made of, nor what material the gratings or prisms are made of, nor even what shapes the prism are or the pitch of the gratings, as long as the geometry of the setup is adjusted accordingly. The easiest way to understand both of those experiments is to imagine that the optics form a temporal Fourier transform, perform filtering in the Fourier domain, then form an inverse Fourier transform.

In order to bring "inertia of the filter itself" into the picture, it seems necessary to define carefully just what part(s) of each apparatus constitute the "filter", and explain why the filter's inertia is the same in the two cases.

optics fourier-transform
share|cite|improve this question
edited May 8 '18 at 20:23

I assume you're talking about discrete Fourier Transforms. We never have access experimentally to the underlying continuous function (the pulse, say). So we can never know the power spectrum exactly. The artifacts you mention are not in the experiment, but arise from the discrete Fourier transform.

An inherent property of discrete Fourier transforms is that the computation actually yields the Fourier amplitudes for a time series of infinite length consisting of repeated copies of the observed time series, suitably normalized to make the results bounded. Thus the Fourier transform we actually compute is for the series which has repeated discontinuities at the points where the original, finite-length series repeats. These jumps are unphysical: they are a consequence of the DFT algorithm. In addition to the spectral leakage, the periodogram is a biased estimate of the underlying power spectrum. It's at one end of the variance-bias tradeoff. For more see the first two references.

The first figure shows an example of two power spectral estimates from a noisy interferometer measurements of an oscillating target: the periodogram and the result of Thomson's multi-taper approach. Thomson's method lends itself readily to computing confidence intervals. So you can test the hypothesis that a certain peak is real or not. Clearly the multi-taper estimate has a lot less variance. 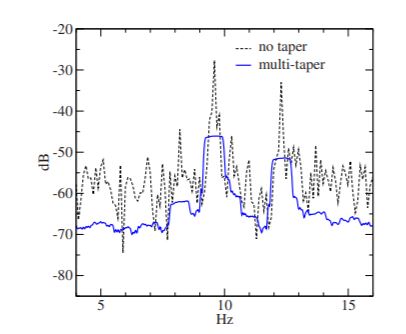 The second big point is that naive filters can easily violate causality. The second figure is based on an example by Toll (reference below). It shows at top a causal wavepacket (source at t=0, say) made via a weighted sum of sinusoids all of which extend from minus infinity to infinity. If you remove a single component (middle figure) from this sum without phase shifting the other components you get the non-causal result at the bottom. The moral to the story is that you can't have attenuation without dispersion. Moreover, the converse is true as well; namely, a phase shift of one frequency is necessarily accompanied by an absorption at other frequencies. 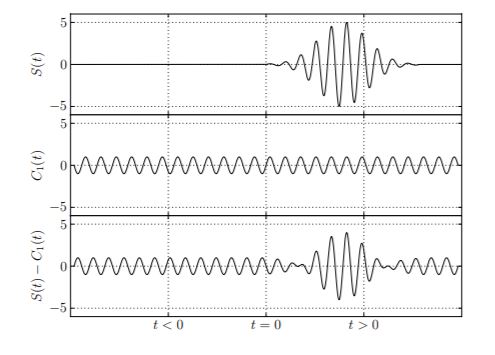 Indeed, not all possible functions $\tilde{f}(\omega)$ correspond to Fourier transforms of functions that respect causality. The Kramers-Kronig relations impose constraints on the set of such Fourier-transformed functions.

Not the answer you're looking for? Browse other questions tagged optics fourier-transform or ask your own question.

5
Why is interference there when pulses do not overlap in space and time?
-2
Whats behind light?

4
Light, Fourier Transforms, Spherical Harmonics
3
Why do spatial filters use microscope objectives, and not other types of lenses?
7
Can we compress microsecond duration laser pulses by a factor of 1000?
0
Does switching a laser on create multiple frequencies?
0
Intuition behind the “rect” function in Fraunhofer double-slit analysis
22
Why does light reflected from an LED TV screen make a sharp X pattern?
2
Frequency Chirp, Instantaneous Frequency and Photons