In general, if you shine some EM radiation through an arbitrary polarizer which works for visible light, it's not guaranteed to polarize your EM radiation. E.g. you can take polarizing sunglasses and shine unpolarized X rays or radio waves through it, and this radiation most likely go through almost unaffected.

But I've never heard of any term which would refer to polarizer's rejection spectrum – i.e. how much of the "wrongly" polarized radiation of given wavelength it blocks. Is there any such term? What is it?

The quantity I was interested in is called polarization extinction ratio. See the usage of this term e.g. in the description of this wire grid polarizer, like in the following graph taken from that page's Graphs section:

Is there any such term?

Yes indeed there is "anything like a polarizer rejection spectrum"!

A search in google scholar turns up papers, though they tend to be paywalled. Here's just one example from 2018: All-fiber circular polarization filter realized by using helical long-period fiber gratings "...we propose and demonstrate a novel method for the fabrication of a HLPG with a flat-top band-rejection spectrum, which is...""

Skip to the end for the direct answer, here is some background leading up to it. I feel it is pretty essential to read for people working with polarizers.

In optics, it is dangerous to trust sales terminology and spec-writing at face value; for example you can go to your favorite optics catalog and see "non-polarizing beam splitters" that polarize by 10 or 20% or more. They just mean that they aren't the polarizing beam splitters found on the next page. So I will address the physics of the question and leave the sales aspect to the sales reps.

The reason the other two answers don't really explain the term or deny that it could have meaning is that they are thinking of the most common kind of every-day polarizer, based on absorption. Traditionally they were made from stretched organic chains (plastic or gel) laced with iodine atoms that provided the electrons that interacted with the incident light in a directional way; light polarized parallel to the iodine-laced polymers was absorbed, and never seen again. 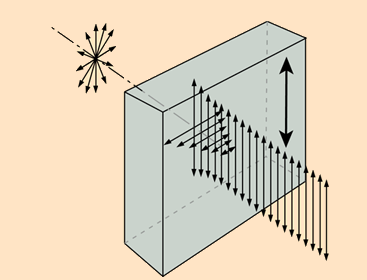 However, there are also other ways to use prism combinations as polarizers.

There are several very different kinds of polarizers based on pairs of prisms. You can read more about them in Wikipedia or this nice tutorial purewavepolarizers. No matter which kind, they have two outputs, one for each polarization. Generally these polarizers have very low absorption in their useful range, so whatever light is rejected from one exit direction is present in the other direction. 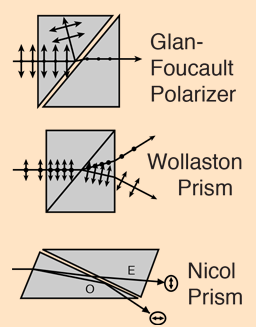 There are also Wire Grid Polarizers made from long lines of metal (wire, or nanofabricated grids) with a sub-wavelength period that also efficiently reflect one polarization while transmitting the other. While these can be a bit lossy since the wires are sub-wavelength wires or nano-fabricated lines of metal, the transmitted and reflected light is often less than the incident light, so the spectrum of light from one output would be less representative of the rejected spectrum from the other. 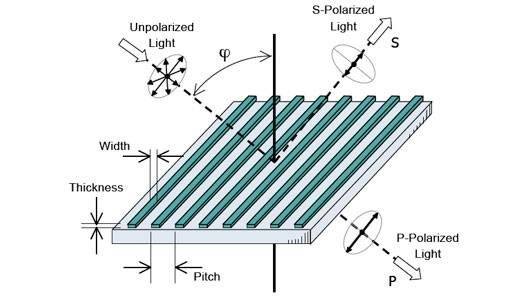 Source: Quora NOTE: The diagram is misleading, with non-normal incidence on this oriented surface, you have the possibility that the plane of incidence does not contain the direction of the lines, and so the simple concepts of s- and p-polarization don't apply. Take this, and all drawings of wire grid polarizers with a grain of salt!

Optics is such a broad field and widely written about. The phenomenon of linear polarization was noted directly about two centuries ago, effects due to polarization were noted even earlier.

A rejection spectrum can be either