From "Introduction to Electrodynamics" by David J. Griffiths, Example 12.13:

Consider a rectangular loop of wire carrying a steady current $I$. Picture the current as a stream of noninteracting positive charges that move freely within the wire. When a uniform electric field $\mathbf{E}$ is applied, the charges accelerate in the left segment and decelerate in the right one. 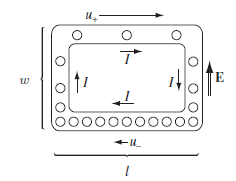 By "piling up", Griffiths means that the charge would be accumulating somewhere. For example, suppose the current in the top segment was greater than the charge in the right-hand segment. Then there would have to be charger accumulating at the top right corner, since at all times there is more charge entering this corner than leaving.

It is not obvious that the current in the loop is the same after $\mathbf{E}$ is applied compared to what it was before $\mathbf{E}$ was applied. But if you look at Griffiths's argument carefully, he only ever uses the loop's current $I$ in the presence of the electric field, and he never uses the value in the absence of the field. So this distinction doesn't actually affect his argument.

In any steady state dc cuircuit with wires connected in series the current will be the same everywhere. At the instant the electric field is applied, there will be small transient differences in the currents. These transients will very quickly reach to equilibrium and the steady state will be reached.

When the loop is in the steady state, all currents must be equal. Charge cannot be created nor destroyed. If electrons are flowing at a certain rate through the cross section of the right segment of the loop, then the same number of electrons must flow in the left segment of the loop. If this is not the case, then more electrons would be flowing into one segment than the ones that are leaving it, hence, electrons would pile up in one segment and deplete in another. So in the steady state, the current in all segments is equal. This is also the case before the application of the electric field.

Think about it in terms of the hydraulic analogy. Liquid in a pipe cannot disappear. If an amount of liquid flows at one point in a loop, then the same amount must flow at another point in the loop.

The current in a wire loop with several sources could be calculated as a sum of currents caused by these sources acting alone. This is principle of superposition of currents that is applicable to any linear circuit.

The original, unknown, source, by itself, was causing a permanent current I.

The second, known source, the electrostatic field, E, by itself would cause a redistribution of the charges inside the loop, but would not cause any permanent current. More specifically, the field would cause positive charges to shift upwards a bit (or "pile up" towards the top of the loop) to cancel the field inside the wires.

Not the answer you're looking for? Browse other questions tagged electromagnetism electric-current classical-electrodynamics or ask your own question.