Why when opening parachute, the man doesn't go upwards?

If an object is moving at terminal velocity and then opens the parachute, the air resistance is higher than the weight so why doesnt he go upwards.

Because force and motion aren't always in the same direction. Suppose you slam on the brakes in your car. Your car doesn't instantly go backwards. Instead, it accelerates backwards.

When a skydiver opens their parachute, they accelerate upwards. This is not the same as saying the move upwards.

Acceleration is a change in the velocity. So the amount of downward velocity the skydiver has gets smaller and smaller, until they reach a new terminal velocity. During this time, the change in their velocity is upwards.

If we illustrate the skydiver's velocity in red and force and acceleration in blue, we might get something like this: 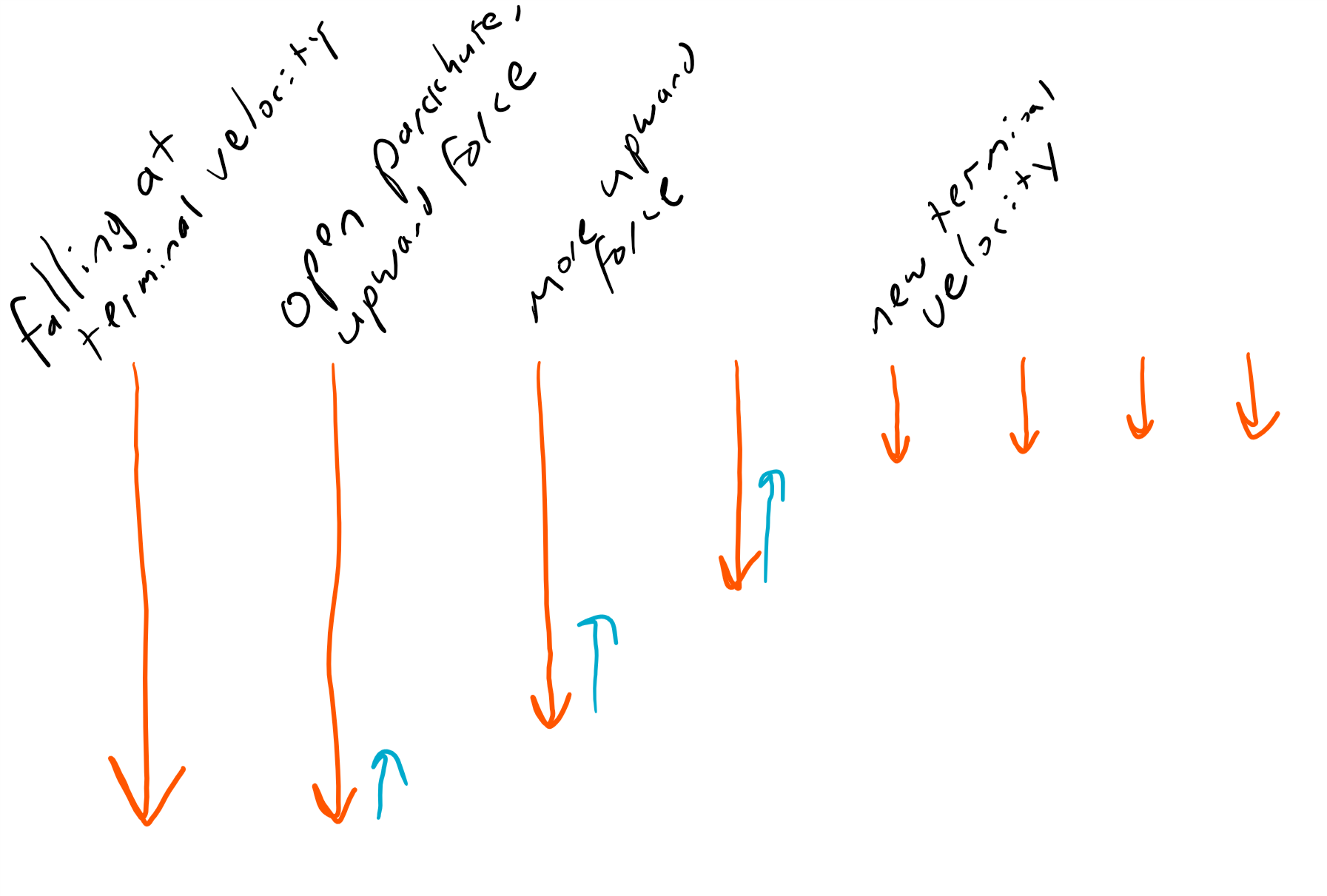 Time goes from left to right. The skydiver opens their parachute and feels and upward force. It pushes upward on them, but isn't enough to completely stop them and make them move upward. Instead, it just slows them down a bit as they continue falling downward. They keep feeling an upward force (while moving downward) that slows them until they get to a new terminal velocity.

Note that this picture shows the velocity arrows next to each other in space; in reality, the skydiver gets lower and lower in space as we move to the right, but that was harder to draw.

Force can oppose motion. Parachutes provide upward acceleration but the acceleration downwards is much larger in the bigger picture. This is not the same as saying the move upwards; parachutists acceleration > acceleration due to parachutes.

Acceleration is a change in the velocity**

downward velocity eventually decreases to match air resistance and they reach a terminal velocity phase where both upward and downward forces are equal and the parachutist will fall at the same rate.

unless there's an upward force that's much larger than the downward force on a stationary object, the object will not move upwards.

Something going forward will have to slow down before going backward. For example a boat driving forward at 15 km/h has to slow down to 0 km/h before it starts going backward. Same thing for the man. However as he slows down the upward force, in this case drag, produced by the chute falls, meaning it will eventually drop to a level where drag = gravity, and the man will fall at a constant rate. Therefore the man will never begin rising, unless there is some external force like an updraft or a gust of wind.

DaPlaneNerdDaPlaneNerd
1
New contributor
DaPlaneNerd is a new contributor to this site. Take care in asking for clarification, commenting, and answering. Check out our Code of Conduct.
$\endgroup$
Add a comment  |
-3
$\begingroup$

Summing it up, It's my conclusion that: 1) If an object is at rest, a car for instance; and a force is applied it will accelerate until the force is applied. Now we stop exerting the force and it will continue its motion with net force but since in our world friction force is there; it's impossible. 2) Secondly, parachutists don't move upwards or backward because the force is not that large enough. As said earlier by referring to a car, first it decelerates and if the Force is big enough it moves in the opposite direction. That's why the parachutist's speed keeps on decreasing until Weight=Air Resistance. I came up with this conclusion. Anyone please check it and rectify if needed. I want to make sure, it's correct. Thanks

Not the answer you're looking for? Browse other questions tagged newtonian-mechanics forces projectile drag free-body-diagram or ask your own question.

2
Why doesn't a parachutist, according to Newton, “fall” upwards (because drag is larger than gravity)?
-3
Why object in terminal velocity doesnt stop