A problem in SS Krotov's Aptitude in Physics book reads:

A horizontal weightless rod of lenght $3\ell$ is suspended on two vertical strings. Two loads of mass $m_1$ and $m_2$ are in equilibrim at equl distances from each other and from the ends of the strings. Determine the tension $T$ of the left string at the instant when the right string snaps.

With this, a figure is given: 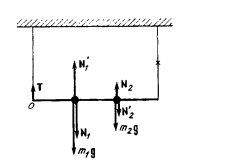 And this is the solution from the end of the booklet:

Now the two portions which I don't understand:

homework-and-exercises newtonian-mechanics rotational-dynamics
Share
Improve this question
edited May 6 '18 at 15:20

1
Pulley system with rope
1
Rotating platform with pulleys and stacked blocks
6
Will "A" experience max static friction if "A" is connected to "B" which is on the verge of slipping?
1
Tension and Angular Momentum Equilibrium (Exercise)
1
2 block friction problem