Higgs measurements at the LHC

The Higgs boson has been measured by CMS and ATLAS at the LHC, but I was wondering wether they used the same decay channel to measure it or not (for me, in the latter case, the measurement would be much more robust). Additionally, when they presented the results, both of them had 4.x $\sigma$, did this significance increase with time after their measurement (what is the latest significance reported for their measurements)?.

Regarding work for future accelerators, I was wondering what are the easiest channels to measure and wether an accelerator reaching lower energies (LHC will reach 14 TeV, but Higgs mass is 125 GeV) could detect it. What are the relevant aspects that a new detector would need to take into account just to measure Higgs mass?

particle-physics higgs particle-accelerators
Share
Improve this question
asked May 6, 2018 at 7:39

Both experiments used a combination of all significant channels for both the discovery and further measurements, though the most significant was the two photon final state.

If a collider were built to study just the Higgs boson, it wouls probably be an electron-positron collider, with at least $m_Z+m_H$ energy, where $m_Z$ and $m_H$ are the masses of the Z and H bosons, respectively. Incidentally, this threshold is only about $216~\rm GeV$, barely more than the LEP II experiment that failed to discover the Higgs boson! See the related question Could LEP II have discovered a 125GeV Higgs?

As you can see from the following plot (from the LHC Higgs Cross Section Working Group), the primary branching fraction of the Higgs boson is $\rm b\bar b$, by a good margin. This is a difficult channel to use at the LHC because the LHC is a hadron collider, and all of the quarks involved in the interaction make a huge mess of things. 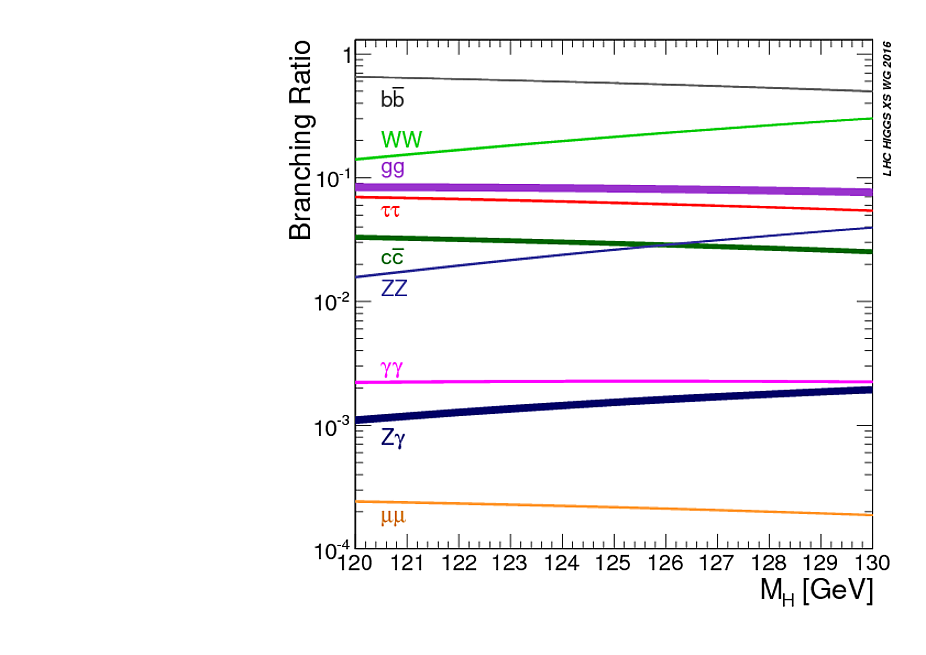 The Higgs boson is several hundred more times likely to decay to quarks than to two photons, but it's almost impossible to see through the massive quantities of quarks produced in other reactions. The two photon channel is rarer, but much cleaner than the more common channels.

A lepton collider does not suffer from these issues. An electron-positron collider has somewhat of an issue producing Higgs bosons, since the Higgs couples to mass and the electron is still light. Significant production is possible above $m_Z+m_H$, however. Since a lepton collider is much cleaner, the $b\bar b$ channel is much more viable for studying the Higgs, although all significant channels would almost certainly be used to improve the statistics and do specific precision studies.

The absolute ideal machine to study the Higgs boson would be a muon-antimuon collider, since muons are much heavier than electrons and so couple to the Higgs more strongly. This means a machine that can produce many, many Higgs bosons very quickly. The technical difficulties of producing, accelerating, and colliding muon beams inside their $220~\rm\mu s$ lifetime means this is unlikely to come to fruition anytime soon, though.

Not the answer you're looking for? Browse other questions tagged particle-physics higgs particle-accelerators or ask your own question.

16
Could LEP II have discovered a 125GeV Higgs?

1
Are there any models for two light Higgs?
6
What are the advantages of the ILC over the LHC?
10
ATLAS Higgs Interpretation
9
How do you find spin of a particle from experimental data?
9
Impostor Higgs?
6
Why is the energy of particles in accelerators much higher than the energy of the particles they are trying to find?
3
Identifying the Higgs boson at LHC
1
What is "mass resolution" in decay channels?
0
What is the point of particle accelerators with lower energies than the LHC?