Some time ago I read that the top quark mass was measured in the LEP collider, but as far as I had understood, that was an electron collider, how was the production of a top quark possible there?

The top quark wasn't discovered at LEP, though it was able to estimate the top quark mass by measuring properties that depend on the top mass. LEP simply didn't have enough energy to create top quarks. The top was discovered at the Tevatron.

However electron-positron colliders like LEP can produce $t\bar t$ pairs given enough energy. The tree level diagram is:

If there is enough energy available in the beams, an $e^+e^-$ collider can produce top/anti-top pairs through the same process it creates pairs or up, down, strange, charm and bottom quarks. The $e^+$ and $e^-$ annihilate to an off-shell photon, which in turn becomes the $f \bar{f}$ pair.

But neither LEP nor LEP-II had enough energy to do that for top quarks.

Instead, by doing “Precision Electroweak Measurements on the Z Resonance”, it was possible to calculate values of the top mass (and weaker limits on the Higgs mass) that would be consistent with what was observed.

The 1994 results, before the direct observation, were 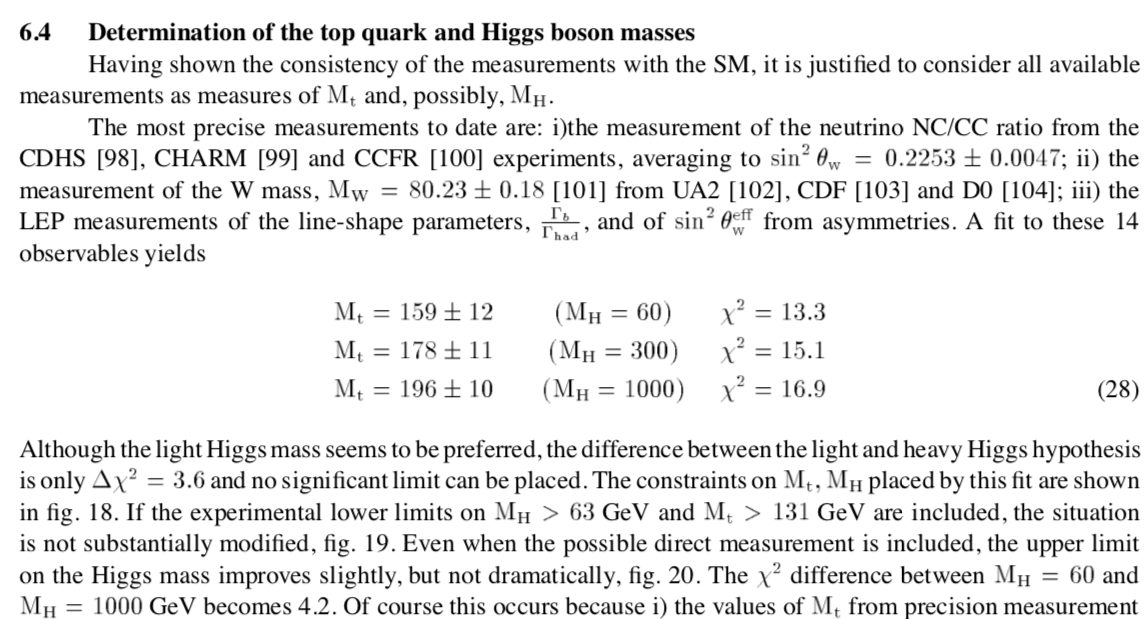 Because it's an indirect measurement, it's not a discovery. But it was useful information because it started to put a high-end limit on the possible top mass (there was a limit to how high a Higgs mass the theorists could argue for). And once the top was observed, it was both a great cross check, and a stronger constraint on the Higgs.

By 2005, the best available data and analysis led to:

Not the answer you're looking for? Browse other questions tagged particle-physics quarks particle-accelerators or ask your own question.

16
Could LEP II have discovered a 125GeV Higgs?
3
Why did it take a long time to discover top quark?
0
How do gluons form virtual top quark or bottom quark loop?
2
How come two protons create top-antitop quark pair? (A question regarding CERN courier May 2016)
2
Pair production of quarks
1
Experimental evidence for 3 generations of quark?
1
Is it entirely impossible for the top quark to hadronize?
0
Chirality vs Helicity in Top Quark Decay