What is the “jet trigger” in heavy-ion collisions?

I saw the word "trigger" many times in papers. And never true understand it. It seems like to set an threshold when select jet? So I want to understand more clearly. Thanks for your help.

Here is an specific example: 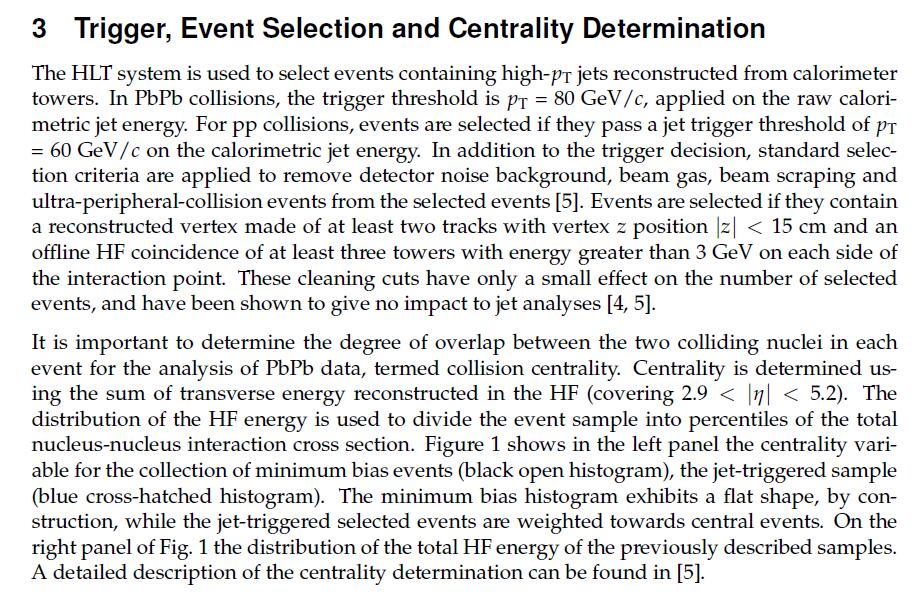 Trigger is a system to identify events rapidly for later analysis. Since the interesting events are rare among all events from the collisions and the computational power is limited, a selection would make life much easier.

A jet trigger is a selection of events for energies deposited greater than some threshold value and a window of pseudo-rapidity, $\eta$, and azimuthal angle, $\phi$, of the detector since a "jet" has a cone-like shower of particles that could be identified by some algorithms related to that "cone".

"Trigger" is a word coming from hunting, one triggers traps to catch animals. Mouse traps have a trigger. In particle physics the word is used for the selection of events of interest, at many levels.

a) data taking, real time electronic triggers are necessary to decide whether the data should be stored or discarded because of obvious inconsistencies or large overlaps making analysis impossible, (in the LHC), or small interest: if most of the energy goes down stream only a sample may be recorded for reference.

b)analysis uses software "triggers" , as high p_transverse events, which indicated a hard collision has taken place, to further reduce the sample before analyzing for specific resonances.

Here is a proton proton to Higgs to two gamma CMS event for a simpler example. 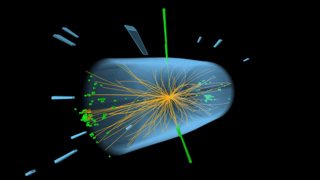 The two photons are the green lines, and the event was found with a trigger that chose from the multitude of events those that had two high p_transverse photons to be plotted and the mass checked for a resonance.

The above is a simple trigger.

Jets of particles in proton proton collisions are expected to be the hadronization of quarks and gluons coming from the main interaction vertex, and algorithms are developed to sum up the four vectors of tracks belonging to a specific jet. The value of these four vectors can be used to trigger the choice for analysis . For example if one wanted a sample that could contain Higgs to hadrons decays, one uses as trigger high values of p_transverse which will ensure large invariant masses among the jets.

Heavy ion collisions have additional constraints for triggers to pick up interesting events, depending on the objective of the analysis, for example , of quark gluon plasma will require very specific "triggers" to pick up the subsample containint it.

Not the answer you're looking for? Browse other questions tagged particle-physics experimental-physics heavy-ion or ask your own question.