When the capacitors arrange as below, 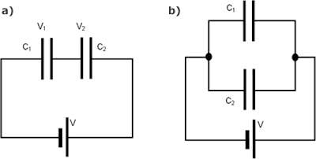 I searched this in google but I couldn't find a satisfied answer. I hope an answer without mathematical description. Thanks

electrostatics charge capacitance
share|cite|improve this question
asked May 4 '18 at 5:09

As an example assume that the two capacitors are identical.

So in this case bring the capacitors very close together so that there is one central plate (middle diagram) and then remove that middle plate to get a capacitor with plate separation twice what it was before and with charge $Q$.

I'd like to add to the very nice and simple answer from @Farcher by giving a description and way of imagining the electrons moving step-by-step in deeper detail.

Think of the battery as giving a certain "push" (by means of its electromotive force / voltage).

We call that total charge $-Q$. This in turn induces the same but opposite charge on the opposite plate, $+Q$.

In this way, parallel capacitors are sharing the charge amount. The same battery "push" will be able to push double as many electrons before the repulsion from each plate balances out the "push", because each plate only gets half. Double as much charge can be stored in this configuration for the same "push".

The only difference in the series scenario is that some reconfiguration happens in between the two capacitors where each plate induced an equal but opposite charge on the next.

Now, the narrower the gap between the plates of a capacitor, the bigger is the attraction between the two oppositely charged plates. This attraction "helps" out the battery "push" and allows for a bit more charge to be stored. That is why you see the separation $d$ in the formula for capacitance:

The bigger the gap, the less "help" and the smaller is the charge that can be stored (the smaller is the capacitance $C$ that indicate the storing capability). With capacitors in series, some extra gaps are introduced along the same line. The overall "help" from the plate-to-plate attraction therefore decreases. The charge pushed to the first plate is there "helped" less by this effect and is thus a bit smaller.

Having two equal capacitors in series, therefore corresponds to having a capacitor with a doubled gap - as Farcher's answer clearly shows. In other words, two in series are worse (lower total capacitance) than one alone.

You also see the plate area $A$ in the formula; the larger the area, the more charge can be stored there and can spread out before the repulsion grows too big. Area thus increases the capacitance by allowing for more charge to be stored for the same push. The capacitors in parallel increases the total amount of charge that can be stored as well, and two parallel capacitors thus correspond to a capacitor of double the area.

1
Why is this charge distribution in correct? Capacitors in parallel and series
1
Parallel-plate capacitor
4
Capacitors in series: Why is the equivalent charge the same as the individual charges
3
Capacitors and Resistors - Series or Parallel?
1
Charges on capacitor after full charge by battery
1
Redistribution of charges when capacitors are connected in series
0
Tricky: Inserting a conductor in a parallel-plate capacitor
3
Charge stored in Series Capacitor = $\frac{Q}{3}$