The capillary action formula is given as: $$h=2T/ρgR$$ where h is the capillary rise, R is the radius of curvature of miniscus, ρ is density, g is force of gravity and T is the surface tension. Now consider a capillary with a large base which gets narrower as we move along the top, such that the radius of miniscus at the top has a radius R, now consider a tube of uniform radius made of same material such that it too allows a miniscus of radius R to form, looking at the formula both capillaries will have the same height of liquid in them but clearly the first one would have a greater weight of liquid suspended. What factors account for that? or is it that my utilization of the formula wrong, if so what is the proper interpretation?

I would add to a very nice answer by @Farcher that, although the surface tension in the top narrow section will keep the liquid in place in both cases, the liquid will actually rise to that level in the first case, but not necessarily in the second.

In this scenario, to reproduce the second case, the cone would have to be lowered down to its neck and than carefully raised.

The diagrams and some basic math below shows that for a given radius of the capillary, R0, and the height of the column, h0, the half-angle of the cone that would support the rise of the liquid to the top has to be less than arcsin(R0/h0). 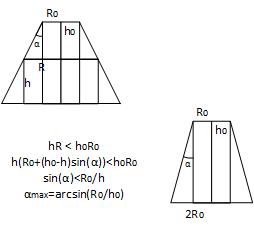 Surface tension produces a pressure difference across the curved interface between the liquid and the air and it is this difference in pressure which results in the capillary rise. 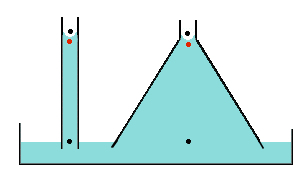 To ensure that the pressure where the bottom black dots are is atmospheric the liquid rises so that the increase in pressure due to the liquid level being higher is equal to the decrease in pressure at the top due to the effect of surface tension.
It is atmospheric pressure which keeps the columns of liquid in position with surface tension and the radius of the tube at the air-liquid interface which determines how high the column of liquid will rise.

Note that I have assumed that at the top the air-liquid interface is in contact with a vertical tube.

Your formula can only be used for a consistently straight capillary, with both sides parallel to each other. For a conical frustum, the formula is $$h=\frac{2Tcos\theta}{\rho gR}$$

Hence, if $R$ were to be the same, $h$ would definitely not be the same.

Not the answer you're looking for? Browse other questions tagged surface-tension capillary-action or ask your own question.