Why is energy emitted when nucleons come together?

In terms of nuclear fusion, why exactly does the coming-together of nucleons result in a net gain of energy (at least until iron)?

The graph of binding energy per nucleon as a function of mass number is: 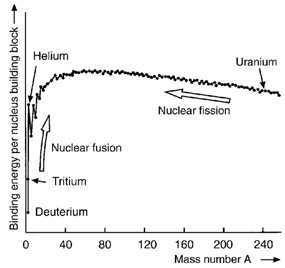 The graph rises at low A, peaks very near iron (Fe, A=56), and then tapers off at high A. The peak value suggests that the iron nucleus is the most stable nucleus in nature (it is also why nuclear fusion in the cores of stars ends with Fe). The reason the graph rises and tapers off has to do with competing forces in the nucleus. At low values of A, attractive nuclear forces between nucleons dominate over repulsive electrostatic forces between protons. But at high values of A, repulsive electrostatic forces between forces begin to dominate, and these forces tend to break apart the nucleus rather than hold it together.

A very heavy nucleus ,say A=240 has lower binding energy per nucleon compared to that of nucleus with A=120.Thus if a nucleus A=240 breaks into two A=120 nuclei ,nucleons get more tightly bound .This implies energy will be released in this process.

Now consider two lighter nuclei (A<=10) joining to form heavier nucleus.The binding energy per nucleon of the fused heavier nuclei is more than the binding energy per nucleon of the lighter nuclei.This means that the final system is more tightly bound than the initial system.Again energy would be released in such a process of fusion

26
Why is the nucleus of an Iron atom so stable?
11
How to explain $E=mc^2$ mass defect in fission/fusion?
3
Nuclear Binding energy
1
If binding energy (from mass defect) is essentially the strong nuclear force maintaining the nucleus, why is it released?
0
Why does fusion above nickel 56 require energy?
1
Why is energy released when nucleons come together to form a nucleus?
1
Nuclear fusion mass defect and energy production
0
Nuclear fusion kinetic energy nucleons theory