In the image, moments (torque) was taken about the point $O$. They have defined $\bar{x}$ as the distance from the point $O$ and the COM. If you scroll down to the third line of workings, they say that

Now, I have a few questions about about the way moments (torque) was found about $O$.

Wikipedia states the following: In physics, the center of mass of a distribution of mass in space is the point where if a force is applied it moves in the direction of the force without rotating

With above definition from wikipedia in mind, how can $ (2g \times 3)+(5g \times 4) + (3g \times 6) = Mg \times \bar{x}$ when $Mg$ is the downward force applied at centre of mass, according to the above definition this would just move the system of objects downwards with no rotation 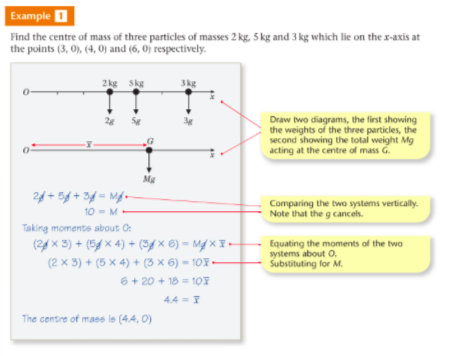 The point of using torque in this question is only to find the center of mass where when an imaginary 10kg mass is placed will behave equivalent to the combination of the 3 particle masses given in the question. There is no connection between the masses and so there is no meaning of rotation of a body in here. If you imagine them to be connected by a mass less rod and say a force is applied at the center of mass, the whole rod along with the 3 masses would move downwards without any rotation. The torque calculation here is only a way to find the equivalent point (center of mass). It doesn't signify the presence of a torque nor is there a rigid body to undergo rotation. The confusion might arise by one assuming the point O as a reference and assuming the masses are rotation about it which is not the case.

I have added the word external to the statement in Wikipedia

In physics, the center of mass of a distribution of mass in space is the point where if an external force is applied it moves in the direction of the force without rotating.

If an upward force magnitude $10g$ where applied at $O$ then the system of masses would be in static equilibrium (balanced).

without any mention of the gravitational fireld strength $g$.

1
Is the newton's second law for a body experiencing a frictional force, relative to the surface in contact?
2
Connection between moment/torque and centre of gravity?
0
Fulcrums, Newton-metres and gas lifts
2
Centre of mass and Rotational kinetic energy
0
Center of Mass/Torque
1
Centre of mass of particles
1
Mechanics, Torques in accelerated frames