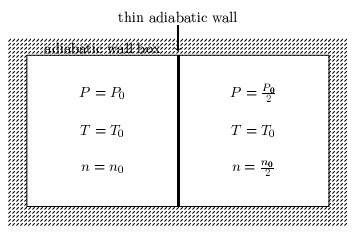 Each room has air inside and has same volume. 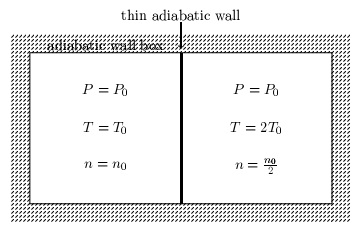 Each room has air inside and has same volume.

If I removed thin adiabatic wall instantly, which case does wind occurr or both ?

Movement of air (the wind) is caused by difference of pressure. Air moves from the areas with high pressure to areas with low pressure.

As a result the pressure would become equal and the wind would stop. But how come Earth's atmosphere has not reached equilibrium during it's billion years history and from time to time the wind does blow?

Even if at some moment the atmosphere is in equilibrium, because the Sun heats the air not evenly, the temperature (and the pressure) of some volumes of air would change and air masses would start moving.

Now to your examples.

If you remove the wall in the first case (pressures are different), the gas will move very fast from left side to right side. There will be a kind of gust of wind - very strong, but short.

In the second example, nothing would happen at the moment you remove the wall. Left half of gas would gradually heat up, right side would cool down. By the time equilibrium is reached concentration of gas in both halves will become equal ($1.5 n_0$), so there would be some net movement of gas from left to right, but that's not a wind.

Movement of air also happens by a difference in temperature. After all $pV=nRT$ and temperature can create a pressure differential.

Warm, dry katabatic winds occur on the lee side of a mountain range situated in the path of a depression. Examples for these descending, adiabatically warmed katabatic winds are the Foehn winds.

Cold and usually dry katabatic winds, like the Bora, result from the downslope gravity flow of cold, dense air.

The role of temperature in the creation of wind is clear. Take also the stack effect:

Stack effect or chimney effect is the movement of air into and out of buildings, chimneys, flue-gas stacks, or other containers, resulting from air buoyancy. Buoyancy occurs due to a difference in indoor-to-outdoor air density resulting from temperature and moisture differences.

You are keeping the pressure constant in the second case, so you will not get a wind. There is always convection from a hot part of a room ( the fireplace) to the cold, even though at same pressure to start with, heat input changes pressure. It is all in the gas law.

Not the answer you're looking for? Browse other questions tagged thermodynamics fluid-dynamics pressure temperature atmospheric-science or ask your own question.

3
How is wind created?