How does the lift force of an airplane work? [duplicate]

At first I thought that the lift force of an airplane wing came from the buoyant force of the air. Thus we can calculate it's lift force using $$ F_b={\rho}gV$$

However, that does not seem to be true since this would yield a smaller number than the weight of the plane consequently the plane would be in free-fall which is not the case. Then I tried reasoning with Bernoulli's equation.

The two answers provided here are wrong. The equal transit hypothesis is easily refuted by simulations. Having a longer path alone does not require air molecules to somehow move faster (why should they need to match up at the end?). Also, the theory breaks down in explaining why airplanes can fly when they're upside down, with the longer side of their wings facing the ground.

The reason for lift simply results (mostly) from a turning of the air stream as it goes over the surface, whether that surface is a wing or any other parts of the plane. So long as a horizontal air stream ends up having some downward velocity component after interaction with the surface, by Newton's third law there will be an upward force on the surface. This is also where angle of attack and stalling arises. The tendency for air streams to follow surface profiles (their detachment leading to a sudden and possibly catastrophic loss of lift) is key here. NASA has decent diagrams (but pretty bad explanations imo) on their website: https://www.grc.nasa.gov/www/k-12/airplane/presar.html.

Note: this answer is not meant to be a proper answer on lift, as Neils has suggested in the question comments, the aviation sx should have a proper discussion on this. I'm just here to correct the misconceptions expressed in the other two.

You would be well advised to leave the buoyancy force out of it. It is negligible for an airplane since the density of air is low.

There is an image of the observed reality below, from https://www.skybrary.aero/index.php/AP4ATCO_-_Aerofoil_Terminology The pressure-speed causality explanation gets a bit involved, as attempted in a Cambridge University article here. The figure does capture the experimentally observed reality (airspeeds and pressure at the top and bottom surfaces).

The shape of the trailing edge of the aerofoil is also a factor in generating lift. From the reference quoted in the figure:

Increasing the angle of attack, which is, tilting the aerofoil so that the leading edge is higher than the trailing edge, does increase lift, for the mere fact that the there is a resultant upward force on the aerofoil as the wind pushes on the underside. The downside of this is that it generates significant drag as a side effect, so it is generally not desirable for cruising. Beyond a critical angle (often found to be around $15^o$), the lift effect collapses, known as stalling.

There is a popular 'longer path' explanation for the lower pressure over the top of the aerofoil, but this is considered incorrect by sources at NASA and the Cambridge University article mentioned above. 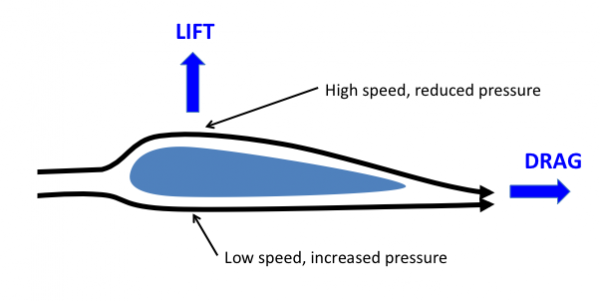 Further description after a question by @coderhk.

For a fluid, Bernoulli's equation states that:

i.e. the sum of pressure energy, kinetic energy, and potential energy is constant. In this equation, $\rho gh$ is the potential energy(per unit volume) of the fluid at a particular point as it moves around the aerofoil, and not the average buoyancy pressure experienced by the aerofoil. The other two terms (pressure and kinetic energy) are also not averages, but point properties as the fluid moves around the aerofoil. To calculate the buoyancy force due to this complex fluid (air in motion), you would need to do something like "calculate the average potential energy pressure ($\rho gh$) around the wing", and multiply that by the volume of the wing.

Another part of what creates lift is that wings are often angled upwards so that more air hits the bottom of the wing than the top which pushes upwards on the wing creating lift as well.

Not the answer you're looking for? Browse other questions tagged fluid-dynamics aerodynamics bernoulli-equation lift or ask your own question.

254
What really allows airplanes to fly?