What happens if we consider the radiation heat transfer from the gas as well? The walls have emissivity e2 (the outer steel wall) and e3. My thought was that this could simply be added to the convective + conductive heat transfer, but I am not sure if it is that easy. 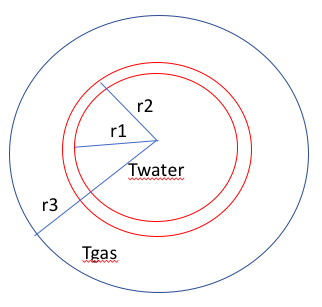 What I have done, heat transfer from gas to water per length:

The radiation from the gas can be expressed as, following Stefan Boltzmann laws:

What is the TOTAL heat transfer from the gas to the liquid, when radiation is considered as well? Can I simply say Qtot = Qconv+cond + Qrad ?

You initially asked about radiation from the gas (i.e., emitted radiation, as would be relevant in the case of carbon dioxide or water vapor, for example, at very high temperatures) but then added an expression for radiative heat transfer from the outer wall through the gas. So I'll assume you meant the latter—that the gas itself is not radiating significantly but that the heat of the outer wall is so high that radiation from it is relevant.

The heat flow from the steel tube to the water is

The heat flow through the inner tube is

The heat flow from the gas and wall to the steel tube, with the radiation mechanism added, is

(The radiation term should be equivalent to yours; it's derived, for example, in Incropera's table "Special Diffuse, Gray, Two-Surface Enclosures".)

These terms are all equal at steady state. Now, if the radiation term weren't present, then you could take advantage of the fact that these equivalent heat fluxes are linear in $T$ and construct an equivalent thermal resistance, as you do in your question.

As far as I know, however, the presence of the radiation term precludes a tidy analytical solution for the general case.

Not the answer you're looking for? Browse other questions tagged thermodynamics radiation thermal-conductivity convection or ask your own question.