I am wondering of how to apply Lenz's law to a jumping ring experiment as shown in the following picture: 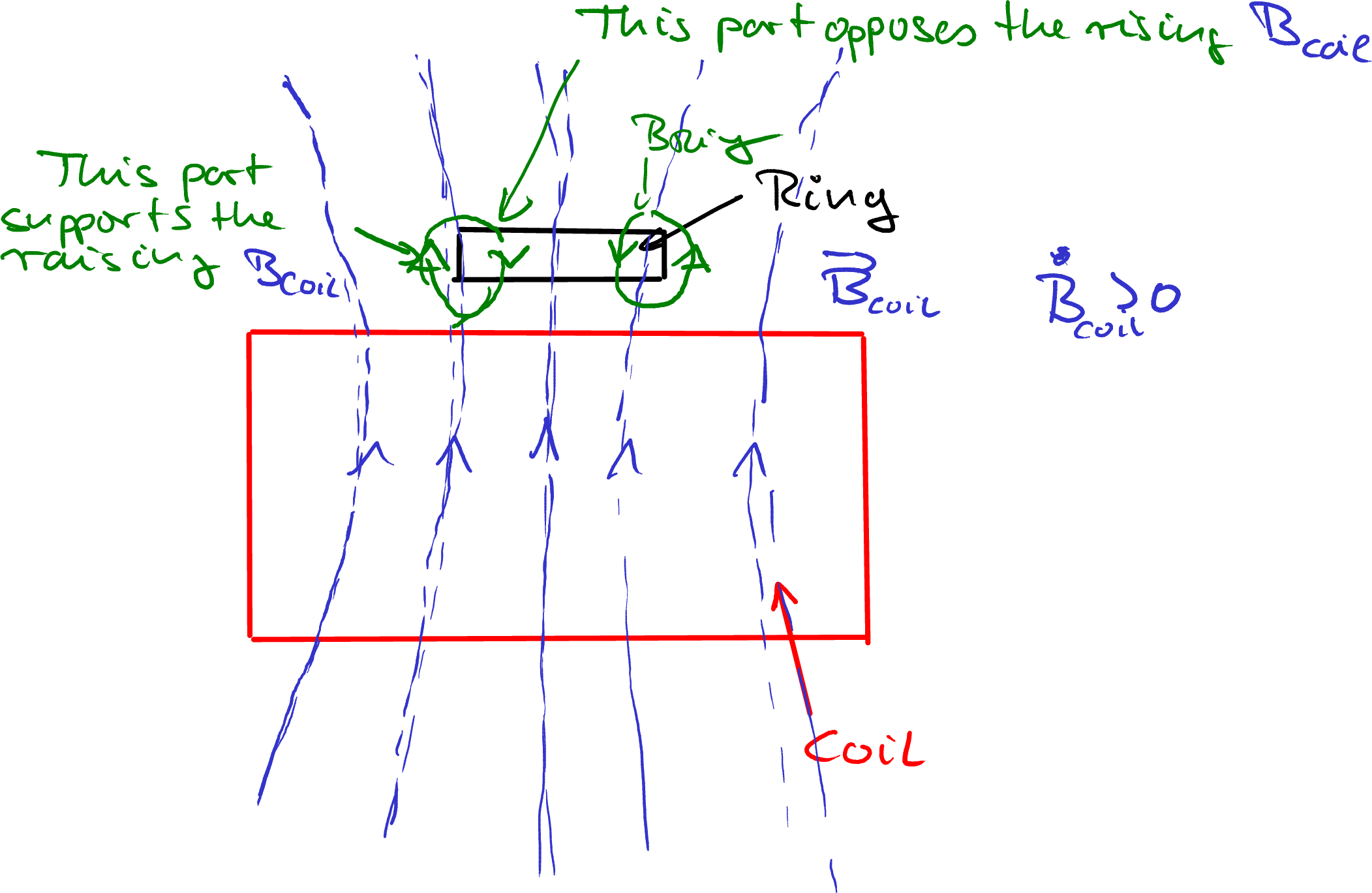 If you choose the ring much smaller than the coil as in my picture above, you see that following one of the green field lines there are parts that oppose the rising $B_{\mathrm{Coil}}$ (inside of the ring) and also parts which are in the same direction of it.

So Lenz's law in this formulation doesn't give a clear indication of how the current would be.

How is the correct, rigorous formulation of Lenz's law and how to apply it in this case?

How to see in this example, why Lenz's law is nothing more then conservation of energy?

Lenz's law states that the emf's direction is such that its effects oppose the change producing it.

"Change" and "effects" are deliberately rather general terms, because there are often several ways of applying L's law. For example if the emf is induced in a conductor because of the conductor's motion, the current that the emf would drive through a circuit containing the conductor would produce a Motor Effect force on the conductor opposing its motion. However, the production by the emf in a closed circuit of flux linked with the circuit opposing the flux linkage change inducing the emf is, to the best of my belief, always applicable.

In your specific case, we may consider the change producing the emf in the ring to be the change in flux linking the ring. This means the flux passing through a surface bounded by the ring. So if you consider a flat surface whose edges are the ring, it's clear that only the downward portions of your green lines matter, because it's these that pass through the surface.

You would be right to be concerned that there are many surfaces we can draw that are bounded by the ring; some of them would be like bubbles about to detach themselves from a child's bubble-blowing ring. But these surfaces will be cut by green lines going in an opposite direction to the blue lines! Try sketching it! [It's a very neat consequence of the Maxwell equation $\text{Div}\vec{B}=0\ $ that the exact surface doesn't matter in cases like this, provided that it's bounded by the circuit in question.]

As for energy conservation, the ring's internal energy increases, owing to the current induced in it, and its kinetic energy increases as it jumps. Both these quantities of energy come from the supply. How? Some of the flux produced by the ring is linked with the coil and produces in it (according to L's law) an emf that opposes the emf of the supply. This means that the supply does work against this emf as the supply drives an (increasing) current through the coil. If the emf induced in the coil re-inforced the supply emf, we'd be getting free energy! This is really transformer theory.

5
A paradox to Lenz's law
8
Magnetic Levitation : Confusion with Lenz's Law
0
Misunderstanding of Lenz's law
0
Faraday's and Lenz's Law
0
Statement of Lenz's law
2
Which provides the energy for induced current at the starting moment of the lenz's law
1
Lenz's law and the motor effect
1
Lenz's Law - Is the force exerted to oppose the motion always a magnetic force?