An electron is released between fixed charged parallel plates. The seperation between the plates is small compared to the dimensions of each plate so that we consider the electric field to be uniform. Does it create electromagnetic wave because of acceleration? How does the energy conservation take place in this situation?

The electron will accelerate, which, roughly speaking, will create an increasing magnetic field and therefore an electromagnetic wave.

As the electron is moving, its initial potential energy is being converted to the kinetic energy and some of it will be lost to the radiation.

Once the electron hits a positively charged plate (because that's where it would obviously end up), its kinetic energy will be transformed, roughly speaking, to heat.

Presumably, the electron was initially placed between the plates by some external force, so we can say that it got its initial potential energy (eventually lost to the radiation and heat), as it was moved to this position.

The change of the electrostatic energy of the system before the electron was moved to its initial position and after it has landed on the positive plate, depends on where this electron came from.

For instance, if the electron was taken from the positive plate, the potential energy was added to the system and then lost, so the final electrostatic energy of the system would be the same as it was before the whole experiment had started.

If the electron was moved in from the outside, the final electrostatic energy of the system would also be lowered because, at the end of the experiment, the charge on the positive plate will be reduced. The exact sequence of energy changes, in this case, depends on the initial position of the electron.

The diagrams below show that the introduction of the electron into the system, could leave its energy unchanged (case A), increase it (case B) or decrease it (case C). 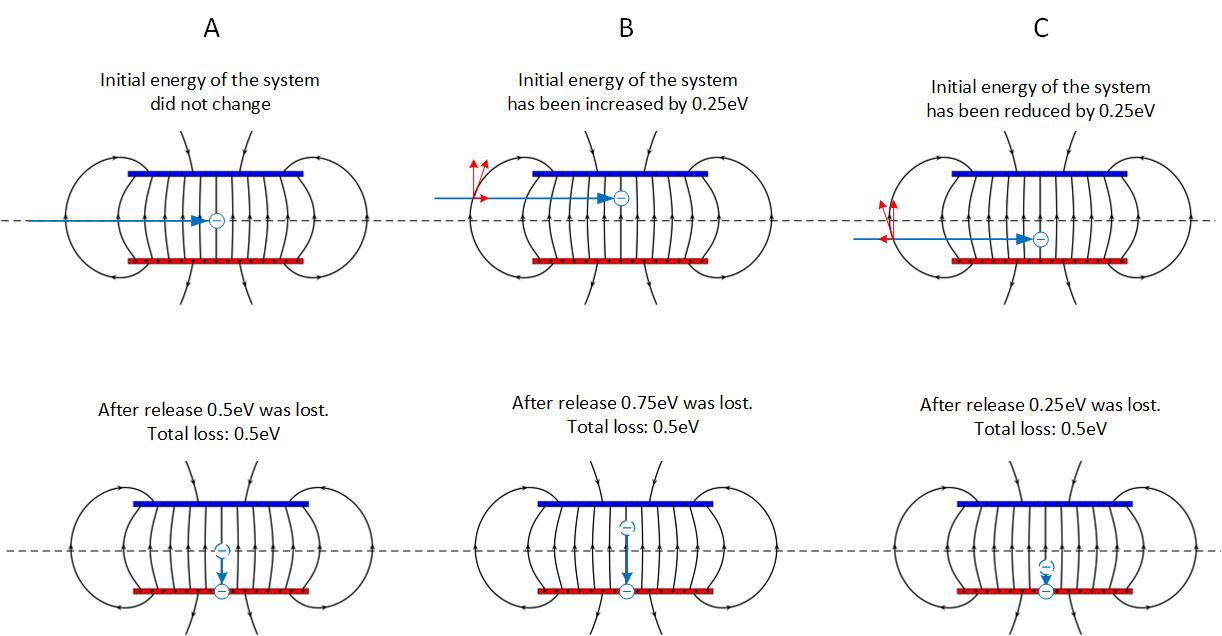 In case A, the electron is moved normal to the electric field lines and therefore no work is performed by the system or on the system and, therefore, the energy of the system does not change.

As illustrated in the diagrams, the energy loss of the system after the electron has been released depends on the initial position of the electron, but in the end, the total loss of energy by the system, in comparison with its energy before the electron has been introduced, is the same 0.5eV in all three cases and could be calculated based on the fact that the system ended up with one unit of charge less on the positive plate.

NOTE: In the case when the electron was taken from the negative plate and ended up on the positive plate, the charge on both plates was reduced by one unit or, assuming that the voltage in that case was 1V, the energy loss would be 1eV.

In the scenario where we take electron from the positive plate, you say potential energy of the system before and potential energy of the system after it hits the negative plate are the same. So the work done by the external force to take the electron near the negative plate is equal to the electron energy that will be lost to radiation and heat. Is that correct? Note: I have clicked answer button instead of comment, it was not on purpose. I couldn't find a way to delete this. Sorry about that.

6
Conservation of Energy in a Capacitor
1
Finding the Electric Field (and other information, besides)
6
Reaction-at-a-distance: Do charged plates immediately repel each other?
3
How does parallel plate lose energy when deflecting charged particles
0
Direction of electric field between a pair of parallel plates having a positive charge in the space between them
1
Discharge time of a mile long capacitor?
1
Can law of conservation of energy be violated?
1
Electric force between two parallel plates one of which got a rough surface