There is similar question on this but I have a specific issue that needs clarification. For the classic example of the ballerina spinning, on extension angular speed decreases, and on retraction angular speed increases because of conservation of angular momentum (no net torque). Lets take the case where angular speed increases due to retraction. Now it also the case rotational KE changes. I am told that work is done by the ballerina in moving her legs/hands inward.

My issue is the last part about the work done by the ballerina. I thought that to change rotational KE we must have torque applied over an angle. Is this wrong? If any kind of nonconservative force acts over a distance/angle then KE, whether it be rotational or translational, will change? I'm confused about how the relationships between torque x angle, force x distance, and, KE rotational and translational.

Consider the ballerina as the system with no external torques acting on her.

As she brings her arms in the forces that her muscles apply are internal forces.
Those forces do work at the expense of chemical energy and the rotational kinetic energy of the ballerina increases.

The diagram below is looking at the ballerina from above and for clarity I have just one point mass $m$ which the ballerina is going to pull in towards the centre of her rotation $C$. There are many other masses on both sides which make up her two arms but these would be a distraction from my explanation and can be added later. 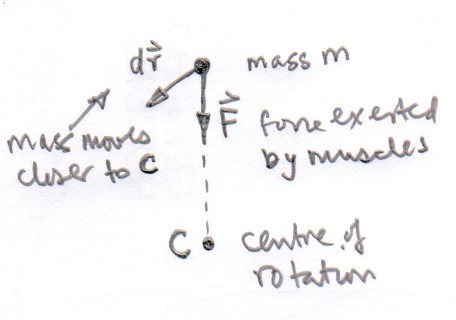 The force exerted by the ballerina muscles on mass $m$ $\vec F$ goes the centre of rotation and so no torque is exerted on the mass and so its angular momentum stays constant.

The wotk done by the force is $\vec F \cdot d\vec r$ is not zero as there is a component of $d \vec r$ in the same direction as the force and that is where the increase in kinetic energy comes from.

The change in speed of rotation is effected by conservation of angular momentum.

Angular momentum L is (r x m v) where r is the radius vector from the axis of rotation , m is the mass and v the velocity ;

L is a conserved quantity if no net external torque is operating ,

For a ballerina holding a static pose, for each particle making up her body,

Thus bringing in her arms or such activities which reduces r(i) for those particles which were earlier spread out.

In order to conserve angular momentum, there is then an increase in the angular velocity.

The rotational kinetic energy must be maintaining its value as the increase in speed is also associated with decrease in moment of inertia as the mass distribution has changed(retracted).

Not the answer you're looking for? Browse other questions tagged newtonian-mechanics rotational-dynamics energy-conservation or ask your own question.

3
How does the kinetic energy of a ballerina increase?

5
Ice skater increase of energy
8
Where does a spinning figure skater's energy go when she slows down?
7
What is rotational potential energy?
0
Torque Changing on Gears, Wheels and Axles
2
Rotational kinetic energy when moment of inertia is changed
2
Why does force x distance not equal kinetic energy for objects rolling down an inclined plane?
1
Rotational work done
1
Kinetic Energy of a spring cylinder system