Is it possible to divert light and/or wave by light or wave?

Is there a way to divert (deviate, deflect) light (photons) by another light (such as laser) or wave? Just like what a prism can do but using a ray of light or wave instead of a prism.

Maybe I'm searching all possible ways to divert light and radio waves. Although for me, it's interesting to find ways in which they do not need a solid or liquid object. Such as magnetic field, light and... Specially the ways that we can implement them today in a lab.

If there is any ways with above assumptions, please sort theme in your answer and if you have any reference about them please insert it. 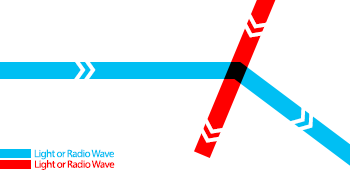 Note: Some information like cost of implementation, accuracy in the deviation, limitations of the method and something like these about each method can be useful too.

OK, I'll go out on a limb here and say that you might be able to create a suitable diffraction grating in air between two ultrasonic transducers. It is certainly possible to produce pretty intense sound this way. The standing waves of sound will produce a sinusoidal variation in the index through which your laser passes. But I would have to do some more thinking to see if the effects would be readily visible. Ultrasonic transducers are pretty inexpensive compared to EO gear. You would shoot the laser through the gap between the transducers at some angle (so as to not hit the transducers). It might work.

The answer to the question in the title of the post, clarified by your picture, is, probably, no.

This answer addresses the case where no solid or liquid objects are used, which seem to be interested to understand.

If a light beam or a radio wave propagate in a uniform linear medium like vacuum or, to a large extent, air, another light beam or radio wave can affect it only where the waves overlap, via the interference, but not before or after.

This, of course, follows from a principle of superposition which states, using a quote from Wikipedia, that "... for all linear systems, the net response caused by two or more stimuli is the sum of the responses that would have been caused by each stimulus individually".

In a vacuum, electromagnetic waves pass right through each other with zero interaction. That is a very well established fact, both experimentally and theoretically. @John Scales is right that in air it is possible to form a diffraction grating, and deflect light, using acoustic interference.

But it appears that you want one type of electromagnetic wave to deflect another type of electromagnetic wave. It can still be done (in a gas, solid, or liquid), but isn't simple. For example, a very powerful laser pulse can be used to form what amounts to a transient diffraction grating in air, resulting from local heating of the air along the maxima of an interference pattern. That diffraction grating can momentarily deflect another laser beam.

Some information like cost of implementation, accuracy in the deviation, limitations of the method and something like these about each method can be useful too.

Implementing would be very expensive and cumbersome. Accuracy of deviation could be very good. The system would consume a lot of power.

To do the same with radio waves would be extremely difficult. Maybe theoretically possible, but very difficult.

The answer is no, for visible frequencies and lower, the photon photon interaction is negligible, and therefore the light beams which are emergent from zillions of photons cannot scatter as in your diagram. They go through each other in a superposition. See my answer here.

Superposition means that interference patterns in space can appear as seen in this MIT video given the appropriate conditions . Superposition does not transfer energy from one beam to the other, just reorganizes it in space in the overlap region.

In principle, you could construct a high energy (short wavelength) laser where each photon would convert to an electron and an anti-electron in vacuum, then the second light beam would scatter off the electron and/or anti-electron.

As the previous answer mentions that Photon-photon interactions in vacuum can happen the cross-section is quite small.

Not the answer you're looking for? Browse other questions tagged optics visible-light electromagnetic-radiation non-linear-optics or ask your own question.

7
Is Light intangible to other Light? And how does all the intersecting light exist in space?