Why is analyticity a good mathematical assumption in general relativity?

In general relativity, real-variable analytic continuation is commonly used to understand spacetimes. For example, we use it to extend the Schwarzschild spacetime to the Kruskal spacetime, and also maximally extend the Kerr and Reissner-Nordstrom spacetimes. It is also used as an essential condition to prove theorems, for example the theorem (see p. 92 of these lecture notes):

If $(M, g)$ is a stationary, non-static, asymptotically flat, analytic solution to the Einstein-Maxwell equations that is suitably regular on, and outside an event horizon, then $(M, g)$ is stationary and axisymmetric.

Note that this is a nontrivial hypothesis; it is necessary in the proof, and plenty of theorems do not use the analyticity assumption, i.e. it's not something you just automatically put in.

I don't see why analyticity is a good assumption. Mathematically, you could say the metric is just defined to be analytic, like it's defined to be smooth, but physically there's a big difference. Smoothness directly reflects observation -- a violation of smoothness would require infinite energy as argued here. Analyticity is much stronger: it implies that the entirety of any spacetime is determined by an arbitrarily small piece of it. While I think there's plenty of evidence that the real world is smooth, I don't see why we should treat it as analytic.

Contrast this with another use of analyticity, in quantum field theory. We can analytically continue to imaginary time by Wick rotation and perform the computation there, then continue back to real time. In this case analyticity is used purely as a calculational device; we never view the imaginary time solutions as physically "real".

Is there a way to physically motivate the assumption of analyticity in general relativity?

Why is analyticity a good mathematical assumption in general relativity? While I think there's plenty of evidence that the real world is smooth, I don't see why we should treat it as analytic.

I don't think analyticity is a good assumption in GR, for exactly the reason you give.

In my experience, discussion of analyticity comes up most often because we're talking about the maximal analytic extension of a spacetime. The point of considering the maximal extension is that we want to rule out unphysical examples that look geodesically incomplete, but are in fact just a geodesically complete spacetime with a piece cut out. The reason for making it analytic is probably just the desire to be able to talk about "the" maximal extension.

For example, suppose I have a spacetime that is the portion of Minkowski space with $t<0$. (Wald has a nice example on p. 148 in which this is initially represented as a certain singular metric so that it's not immediately obvious what it is.) We want to be able to talk about "the" maximal extension of this spacetime and say that it's Minkowski space. But uniqueness may not hold or may be harder to prove if we don't demand analyticity. (It's pretty difficult to prove that Minkowski space is even stable, and I think Choquet-Bruhat only proved local, not global, existence and uniqueness of solutions of Cauchy problems in vacuum spacetimes.)

This is probably analogous to wanting to extend the function $e^x$ from the real line to the complex plane. If you only demand smoothness but not analyticity, you don't have uniqueness.

I don't know how well this analogy holds in detail, and it seems to be true that in many cases you can just require some kind of regularity, but not analyticity. For example, Hawking and Ellis prove uniqueness of maximal developments for vacuum spacetimes (p. 251) using only the assumption that it's a Sobolev space with the metric in $W^4$ (i.e., roughly speaking, that it's four times differentiable). (This is probably their presentation of Choquet-Bruhat's work...?)

Great question. I once asked a GR postdoc the same thing, and he replied

Certainly I find analyticity far too restrictive an assumption, and the impression I get is that other people in my field agree, but that might be confirmation bias. For a simple example, analyticity excludes me from, say, suddenly throwing some matter into a black hole. Any matter profile must always have an infinite tail to be analytic.

For what it's worth, many important results in GR, like the no-hair theorem, require real analyticity. This fact arguably weakens the relevance of these theorems for describing the real world.

In my opinion, analyticity is not a good assumption neither in General Relativity nor in Physics in general (think first-order phase transitions in thermodynamics, hysteresis in electrodynamics, etc.) Even though analyticity is not a good assumption, it is an assumption without which we could not make progress. Similar assumptions in Physics are massless strings, dry water, etc. They do not exist in nature but they simplify the equations, allow theorems, etc.

We know that water is not dry because we have found examples in nature where water wets its container. I think the search for non-analytic metrics in nature would be prevented by General Relativity not being quantizable. So, just take it as a theoretical hypothesis and work with it until you get a result that contradicts observation.

In short, metrics are analytic because we have not measured one that is not.

The mindset to approach Physics is different than the attitude one uses in Mathematics. In Physics, we do not ask questions such as “is the fifth postulate really a theorem?” While that type of question is important, it does not fall in the purview of Physicists. Can you imagine what would have happened if Quantum Mechanics was kept on hold until Schwartz (1951) fully justified Dirac's delta function (1930). More recently, we use Yang Mills theories without caring for the mass gap issue. Notice that the prize for solving that problem is offered by the Clay Mathematics Institute and not by, say, the APS.

Dirac's delta was accepted in the Physics community because of its usefulness in theorems. Dirac's delta belongs to a class of abstractions that appear after a limit process. Massless strings are similar in that respect. The theorem “the tension on one end of a masless string is the same as the tension on the other end” cannot be strictly applied for the simple reason that there are no massless strings. I would argue that analycity is also an abstraction that arises after taking limits. Unfortunately, the analogy ends there because functions cannot be “almost analytic”.

If you do not want to classify analycity among those “abstractions that are useful to the advancement of Physics even they do not occur in nature”, then the question becomes similar to “why are there only two types of electrical charge?” The answer is then similar: design an experiment that would test for a third sign of electric charge, get funding, run it, publish the results. In this case, the question becomes how would you create/measure non-analytic metrics? Probably, they are created by non-analytic matter densities. But, even if you put non-analytic initial conditions, one can argue that everything (but GR) is compatible with Quantum Mechanics. In QM, non-analytic initial conditions develop an infinite tail instantaneously.

It is possible that the original question can be seen with a different perspective. In that case, I would ask for an example of a similar question in a different branch of Physics.

Why is analyticity a good assumption in general relativity?

In general relativity, real-variable analytic continuation is commonly used to understand spacetimes. For example, we use it to extend the Schwarzschild spacetime to the Kruskal spacetime...

I recommend you sit down and take a long hard look at page 848 of MTW. That's where you can see these two diagrams: 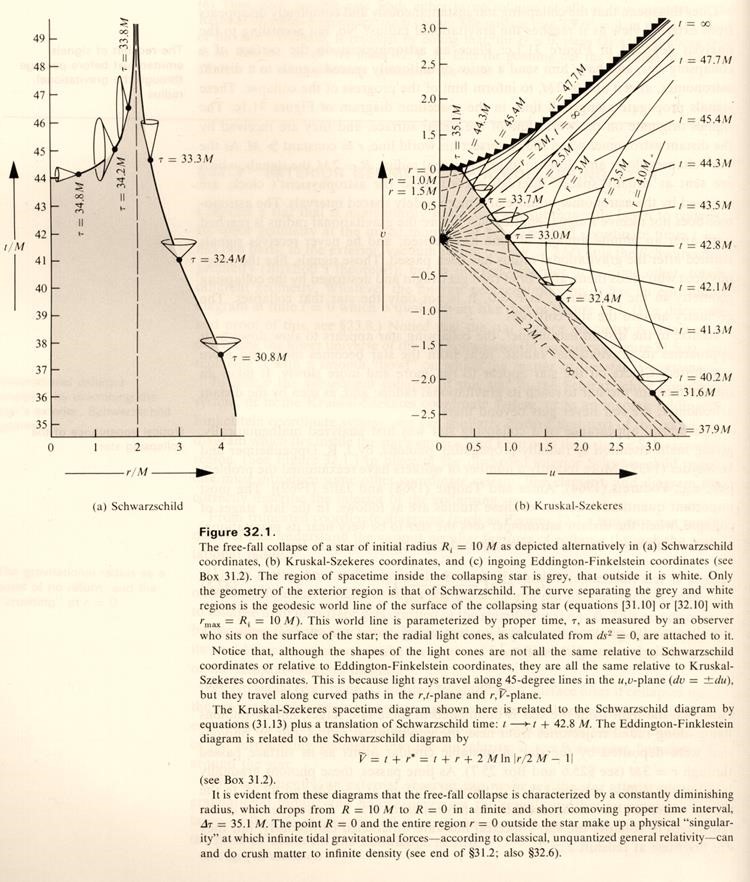 Look carefully at the Schwarschild image on the left. See how it's truncated at the top? The infalling body somehow crosses the event horizon at time t = infinity. Then it comes back down the chart, tracing out the curve to the left of the vertical dashed line. It ends up in the central point singularity at r = 0 at proper time tau τ = 35.1 M. Yes, according to MTW an infalling body goes to the end of time and back. But that’s not all. If you look horizontally across the Schwarzschild chart at time t = 45, you will notice that the infalling body is at two locations at the same time t. It’s outside the event horizon with a proper time τ = 33.3 M, and at the same time it’s inside the event horizon with a proper time of circa τ = 34.3 M. That’s why you read about the elephant and the event horizon, where the elephant is in two places at once. Analyticity isn't going to fix that. All it does is make the situation worse by throwing in tortoise seconds that last forever. And then that the story goes that the infalling body reaches the point singularity in finite proper time. Finite proper time that hasn't happened yet and never ever will.

To paraphrase Newton, that gravity should lead to such things is to me "so great an absurdity that I believe no man who has in philosophical matters any competent faculty of thinking can ever fall into it". But there again, I'm the only one around here who's read the Einstein digital papers.

and also maximally extend the Kerr and Reissner-Nordstrom spacetimes.

Ah, the Kerr and Reissner-Nordstrom spacetimes. Let's take a look at another question on that, namely What is unstable about the wormhole in the Reissner-Nordström solution? That's where we find this Penrose diagram:

It features a parallel universe, an antiverse, a parallel antiverse, a wormhole, and a white hole. And more. How anybody could take this seriously for a moment absolutely beats me. At this juncture I really would like to be quite forceful about this. But you will forgive me if I hold my tongue.

However, I don't understand why this is a good assumption.

Hopefully you should by now understand why it isn't.

Mathematically, you could say the metric is just defined to be analytic, like it's defined to be smooth, but physically there's a big difference. Smoothness directly reflects observation -- a violation of smoothness would require infinite energy as argued here.

You could also say the metric is an abstract thing, and that the map is not the territory. And that if you think gravity can open some door to some parallel antiverse, you've maybe dropped a stitch somewhere.

By contrast the predictions of analyticity, such as the 'other universes' at the other end of a Reissner-Nordstrom black hole have never been verified, and to the best of my knowledge can never be.

Knzhou, they're a fantasy. On a par with thinking a furnace door is a gateway to paradise.

Contrast this with another use of analyticity, in quantum field theory. We can analytically continue to imaginary time by Wick rotation and perform the computation there, then continue back to real time. In this case analyticity is used purely as a calculational device; we never view the imaginary time solutions as physically "real".

Quantum field theory has its own problems. And I would venture to say that they are much worse than you think. One for another day.

Analyticity feels unphysical to me because it implies that the entirety of spacetime is determined by an arbitrarily small piece of it. Is there a way to motivate why the analytic extensions in general relativity should be viewed as physical?

Not the answer you're looking for? Browse other questions tagged general-relativity black-holes analyticity or ask your own question.

46
Why does Taylor’s series “work”?
33
Is the world $C^\infty$?
11
Are there any true discontinuities in physics?
0
What is unstable about the wormhole in the Reissner-Nordström solution?