"The radius of the observable universe is estimated to be about 46.5 Gly."

If I understand correctly, it means the most distant object that we can see right now is 46.5 Gly away (at present), but it was 13.7 Gly away at 13.7 billion years ago. The difference is because of the expansion of the universe, which implies the edge of the observable universe has been getting away faster than the speed of light. The answers given here are compatible with this interpretation.

However, on Wikipedia I read

"The current comoving distance – proper distance, which takes into account that universe has expanded since the light was emitted – to particles [...] is about 2% larger".

Another statement contradicting my understanding.

With this in mind, we can introduce two types of distance:

where the function $a(t)$ is the scale factor, which describes the expansion of space as a function of time. At the Big Bang $a=0$, and by convention at the current cosmological time $a=1$. In other words, at the present day both notions of distance coincide.

Let's now examine the expansion of the universe in more detail. The three graphs below are spacetime diagrams of the Standard Model of Cosmology (the $\Lambda$CDM model) according to the latest data: 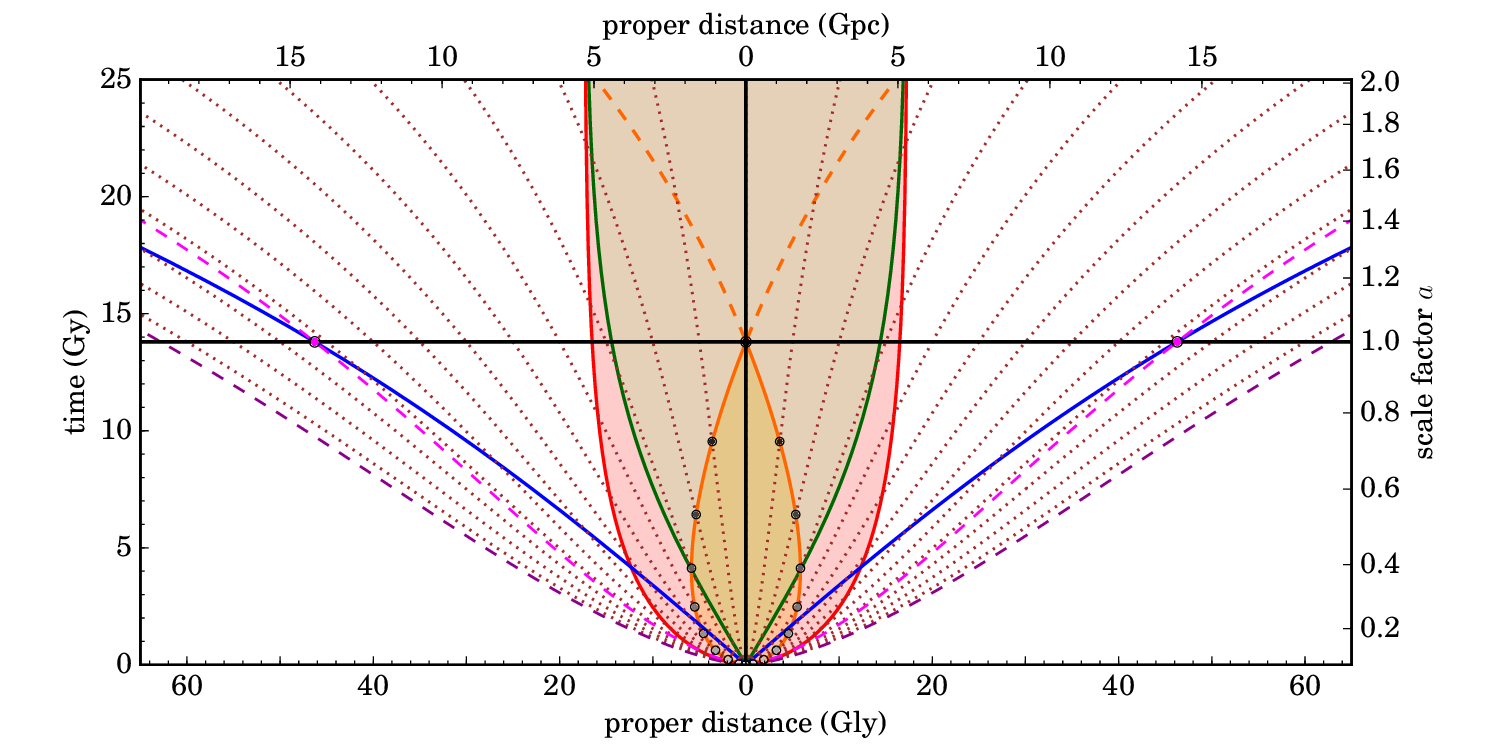 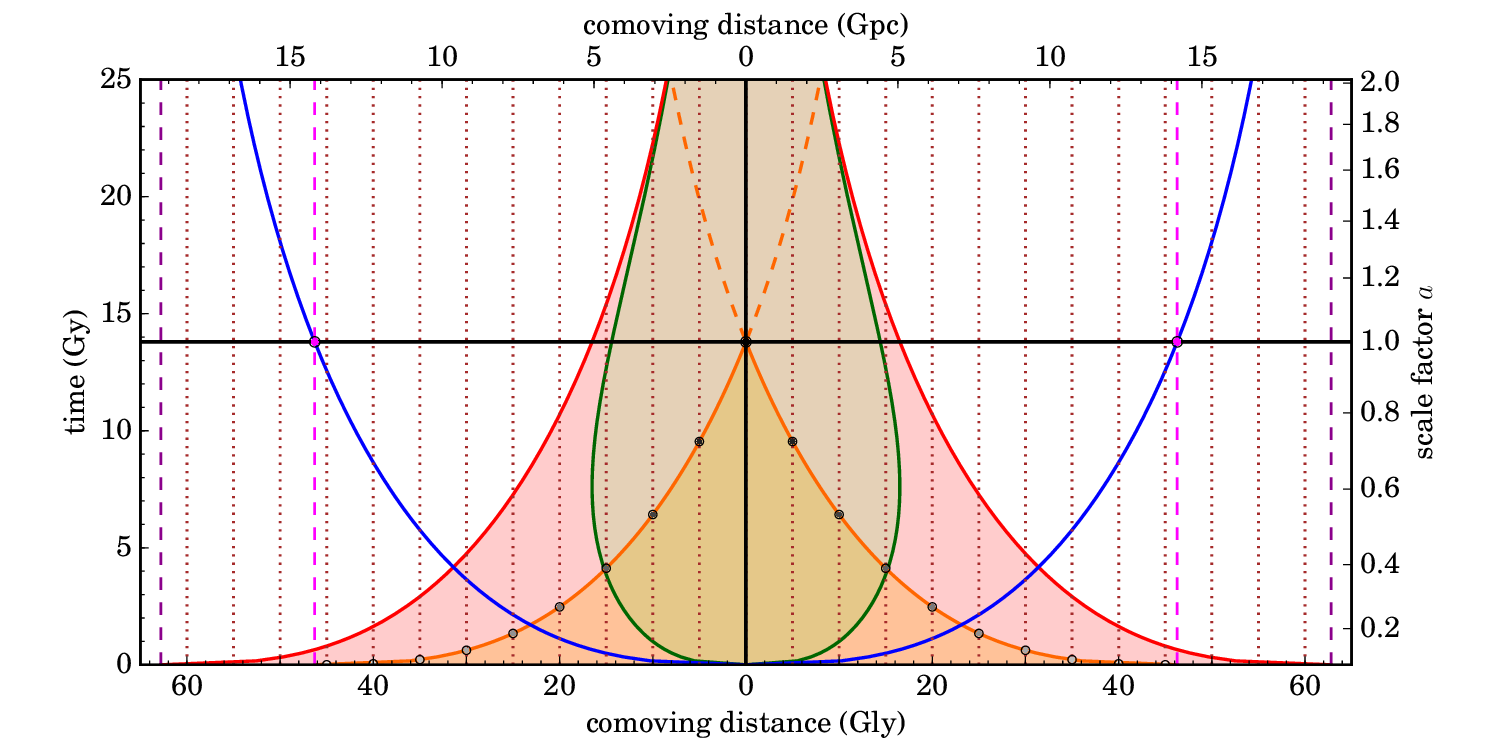 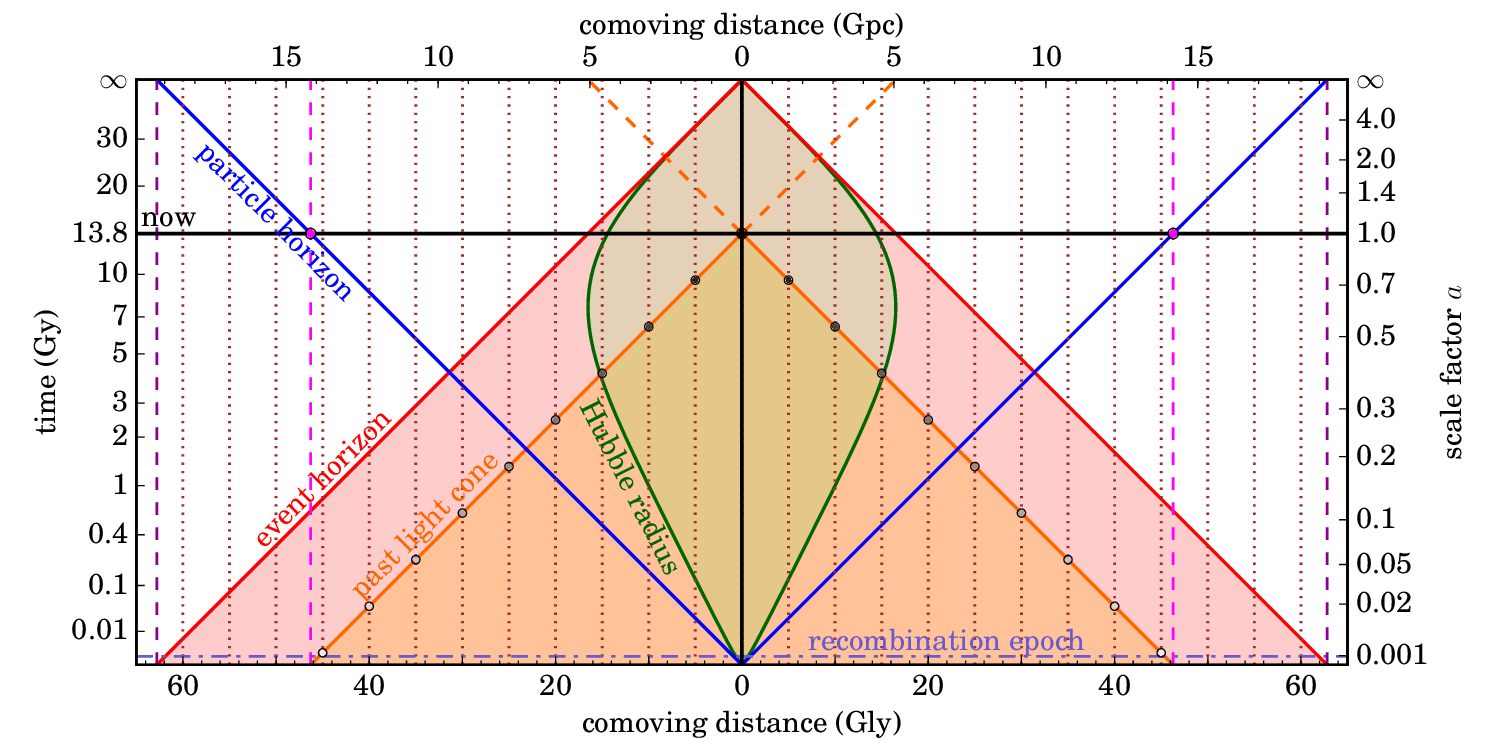 The black vertical line in the middle is our own world line (or more precisely, the world line of a comoving observer at our location). The horizontal black line indicates the current cosmological time (13.8 billion years after the Big Bang). So, we are currently located at the intersection of these two lines.

All right, time to address your questions.

If I understand correctly, it means the most distant object that we can see right now is 46.5 Gyl away (at present),

There were no stars or galaxies in the very early universe, so 'the most distant region of space' is a better term. But otherwise yes, that's correct.

No, it was much closer to us (and theoretically it was $0$ at the Big Bang). Remember that the universe expanded between the time that the photons were emitted and the present day, increasing the distance that photons had to travel to us. Those photons had to overcome the expansion of space in order to reach us, so they must have started much closer than 13.7 Gly from us.

The paths of those photons correspond with the orange curve; it marks the edge of our line cone. So all the photons that we currently observe have travelled on this path, and this is the cross-section of the universe that we actually observe right now. As light rays travelled to us, they travelled through different comoving regions, which I've indicated by a number of grey dots.

Notice that at early times the photons moved through regions outside the Hubble radius. This meant that their proper distance to us was actually increasing at early times, since the speed of the photons wasn't able to compete with the recession velocity of the region of space in which they were moving. Nevertheless, over time they moved through regions with smaller recession velocities, and eventually they did cross the Hubble radius (this happened when the universe was ~4.4 billion years old). From then on, their proper distance decreased, until they finally reach us today.

In theory, the oldest light that we can observe would've been emitted right after the Big Bang ($t\approx 0$). The world line of the corresponding region of space is the lightmagenta dashed line. The current proper distance of that region is ~46.5 Gly (the magenta dot on the horizontal black line) and it is the present-day edge of our observable universe. At every cosmological time, we have a different light cone and a different corresponding region that marks the edge. If we plot this edge at each cosmological time we obtain the particle horizon (blue curve). Notice that it actually corresponds with the path of a photon that started at our location at $t=0$. Which means that an observer that the current edge of our observable universe is 'right now' receiving light emitted from our location at $t=0$

You misunderstood the paragraph. It talks about the difference between the theoretical edge of our observable universe and how far we're actually able to see in practice. The reason is that the very early universe was so dense that it was opaque to light. It wasn't until the universe was about 400,000 years old that light decoupled from matter and the universe became transparent. That moment, called the epoch of recombination, is the oldest light that we can see, and we see it as the cosmic microwave background. This edge of the visible universe has a current distance of ~45.5 Gly, which is about 2% smaller than the theoretical edge of the observable universe.

As I explained earlier, some photons can travel through regions with recession velocities larger than $c$ and still reach us, as long as they cross the Hubble radius at some point. But as you can see from the graphs, photons emitted at $t=0$ beyond a comoving distance of ~62 Gly are never going to cross the Hubble radius (the world line of this region is the darkmagenta dashed curve). They're too far away to overcome the expansion of space, so they can never reach us. The edge beyond which photons cannot reach us is called the cosmic event horizon (red curve). It's also the edge of our light cone at $t=\infty$.

I hope this helps, it's a lot to digest. Some further reading:

Expanding Confusion: common misconceptions of cosmological horizons and the superluminal expansion of the Universe

Some of my own, more technical posts on this subject:

Not the answer you're looking for? Browse other questions tagged cosmology spacetime space-expansion distance observable-universe or ask your own question.

63
Can space expand with unlimited speed?
65
Why is the observable universe so big?
25
What is the theoretical limit for farthest we can see back in time and distance?
5
Does space expansion imply light will *never* reach objects currently distant enough?
0
How is the co-moving co-ordinate defined mathematically in cosmology?
1
What is the relationship between Cosmic Time and Scale Factor (or Redshift)?
0
Observable universe at $t=$infinity