Form of Light-Cone in pure $AdS_3$

There is a picture in the article of Harlow which (in particular) represents light cone in $AdS_3$. Note that point X has nonzero radial coordinate. 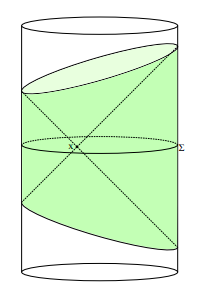 If point X has zero radial coordinate it is quite easy to show that light cone is given double cone. In particular it is formed only by null geodesics with zero angular momentum(straight lines). Yet this won't be the case if X has nonzero radial coordinate.
So my question is whether it is still going to look like double cone?
I have found some relevant information about the matter here. I hope it will allow me to plot the graph explicitly. However before spending possibly significant amount of time on this affair I would like my intuition to be tested.

So here are my arguments. First of all let us remind ourselves that only those null geodesic in $AdS_3$ which have zero momentum can go through point with $r=0$. Secondly every null geodesic that starts on some point on the boundary will terminate at the antipodal point. 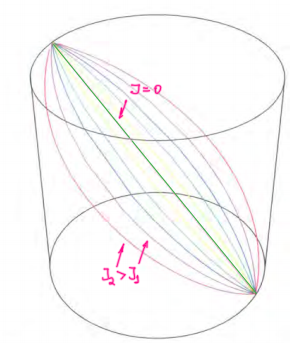 This being said I state that in the light cone presented in the article of Harlow there will be only two null geodesics with zero angular momentum. Rest of the cone(I suspect it will still look like double cone) will be formed by null geodesics with different nonzero values of J all intersecting given point X. 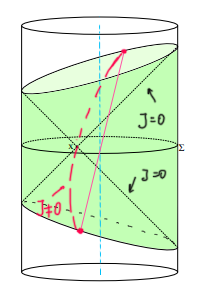 Is it really how this thing works? Or am I still missing something?

Yes it seems right. AdS is maximally symmetric so the light cone associated with this point off centre is just a shifted version of the light cone for the origin that you talked about. This double cone intersects the world line r=0 at only two points.

Not the answer you're looking for? Browse other questions tagged geodesics ads-cft holographic-principle anti-de-sitter-spacetime or ask your own question.

6
Help with the understanding of boundary conditions on $AdS_3$
2
Getting diffeomorphisms from boundary conditions in $AdS_3$
5
$AdS_3$ soliton of Witten - for Hawking-Page transition
3
Applicability of Ryu-Takayanagi formula for boundary regions which do not belong to constant time slice
2
Are the horizon generators radial null geodesics also?
2
Particle falling into a Kerr black hole