How likely are Primordial Black Holes to form in the early universe?

In the very early universe, tiny fluctuations created slight over- and under-densities in mass/energy. As far as I understand, if a region becomes sufficiently over-dense, a primordial black hole (PBH) would form. This might be very very unlikely, but it should have some non-zero probability everywhere in space.

A) Do we have any sense of how many of these PBHs to expect?

B) The power spectrum was essentially flat back then, which I believe means that the size of fluctuations were scale-invariant (the average over-densities on one scale are twice as big as those at half the scale). Does this mean that PBHs are equally likely to form of any size ??

C) Does inflation have anything to say about this?

We can investigate the PBH abundance constraints for a large number of possibilities, for instance, evaporation, entropy, relic particles, nucleosynthesis, gamma rays etc.

These constraints applied to different kind of PBH masses, that range from $10^4$g to $10^{45}$g, depending on the constraints that we are talking about.

Here is a graph that explains these constraints in detail.

Table. 1: Summary of constraints on the initial PBH abundance, $β(M_{PBH})$. 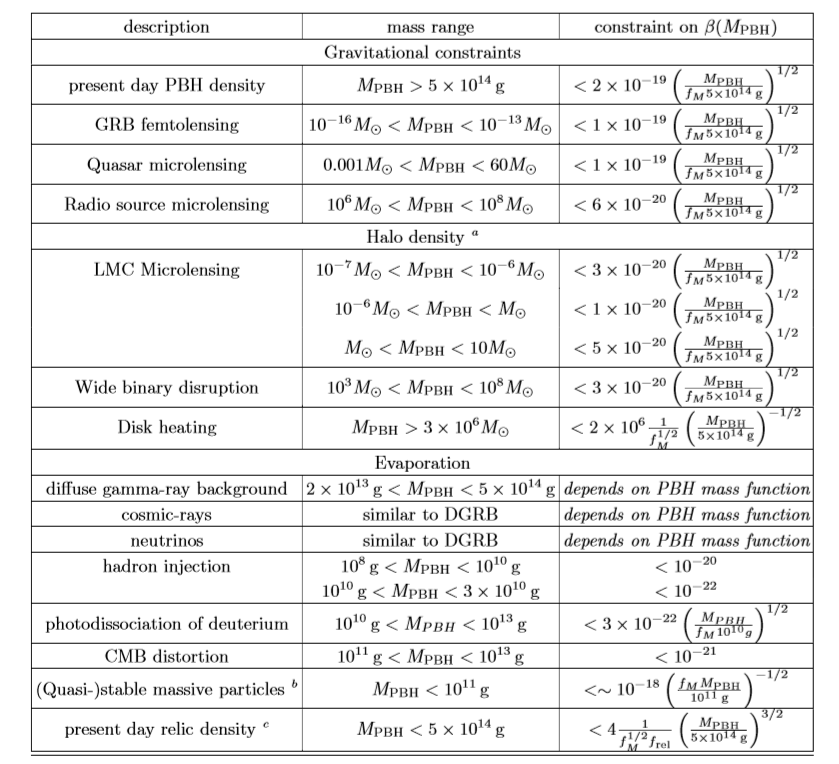 A) Do we have any sense of how many of these PBHs to expect?

As we can see the PBH numbers are very low, that we can even neglect their formation. However, this is true for if the power spectrum were a pure power law.

C) Does inflation have anything to say about this?

I'll say my answer in other way around. Any inflation model that produces a large number of PBH on the small scales should be abandoned.

I recommend these articles that explain PBH density constraints and their effect on the power spectrum in detail.

The graph is taken from (https://arxiv.org/abs/0903.3184) I highly recommend this article to read/study.

A emphasized in Reign's answer, a variety of different models of PBH formation have been considered. Different models make different predictions. For the sake of giving a concise answer, only one of the simplest models will be considered here. Non-trivial derivations will be omitted, but I'll outline some key equations, define the quantities that they involve, and provide some numerical estimates from the literature. The model considered here uses these assumptions (among others):

To begin addressing part A of the question, let $\beta(M)$ denote the total mass of all the PBHs with individual masses $\geq M$ divided by the total mass-energy available in the universe at the time of PBH formation. The quantity $\beta(M)$ can be related to the power spectrum of density fluctuations, based on this principle from page 2 in [3]:

In order for a PBH be formed, a collapsing overdense region must be large enough to overcome the pressure force resisting its collapse as it falls within its Schwarzschild radius. ... This requires that its radius exceeds the Jeans length...

Strictly speaking, this [quantity $\beta(M)$] is the mass fraction in black holes of mass greater than $M$, but in practice $\beta(M)$ is such a rapidly falling function that these can be taken to all have the same mass $M$.

Equation (4) addresses part B of the question within the simple model being considered here. It says that the number of PBHs formed is a rapidly decreasing function of their mass. Some parametric predictions are shown in figure 4 in [5], reproduced here for convenience: 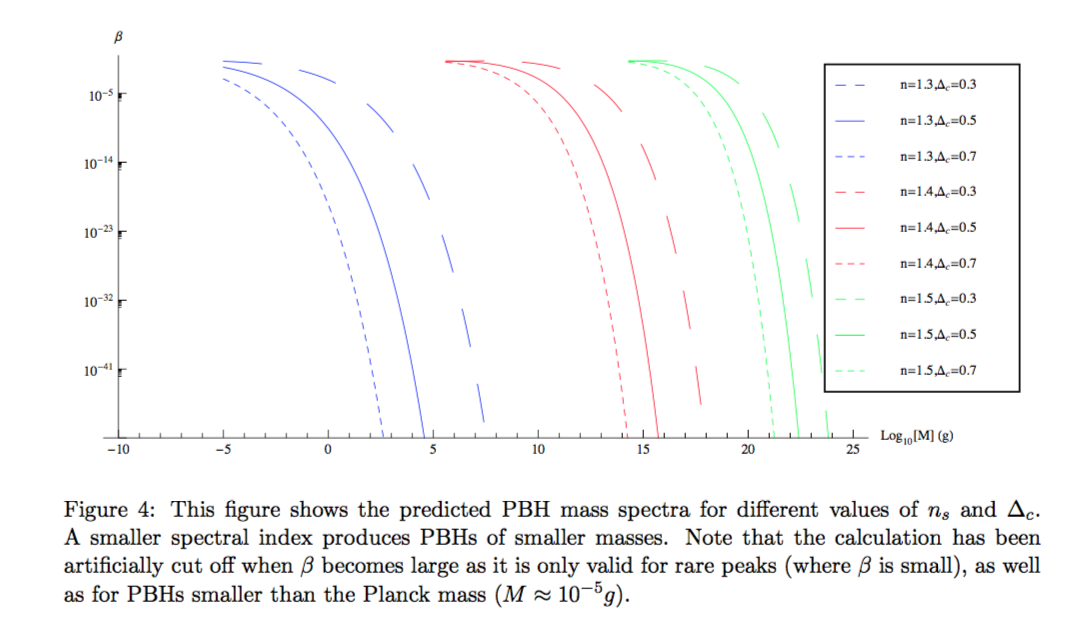 The point of showing this excerpt is to emphasize that the comparison between PBH-density predictions and observational constraints are often used to constrain the model's parameters, rather than using independent constraints on those parameters ot predict the PBH-density. So the "predictions" reviewed here should be interpreted with that in mind. Also, regarding the question about scale invariance (part B), page 12 in [6] says this:

if the power spectrum of the density perturbations were exactly scale invariant... then the abundance of PBHs would be completely negligible, $\beta(M)\sim \exp(-10^8)$, since on cosmological scales the PBH mass variance is measured to be of order $10^{-5}$ ...

This is why the results reviewed above consider values of the spectral index (that is, the exponent in $P(k)\propto k^n$) that deviate from strict scale-invariant, and this is why $\sigma(M)$ and therefore $\beta(M)$ ends up depending on $M$.

Regarding part C of the question, since PBH formation was assumed here to occur only after inflation, the role of inflation is indirect: it serves to ensure that the cosmological density is close to the critical density that was used to get equation (1), and it also affects the spectrum of density fluctuations, as stated on page 1 in [3]:

In the "standard" cosmology, the universe has been radiation dominated ever since the end of the reheating period after a phase of inflation at extremely high energies, which was responsible for the generation of density perturbations.

Not the answer you're looking for? Browse other questions tagged cosmology black-holes space-expansion big-bang cosmological-inflation or ask your own question.

0
How would primordial black hole forms if expansion of space overwhelms gravity?

2
What is the process by which the density fluctuations that were detected in the CMB evolved into the first stars?
1
If temperature is dependent on mass, how did the early universe have a temperature?
1
What information about inflation could be gained from a measurement of the Cosmic Gravitational Wave Background?
1
How inflation creates a universe from nothing?
1
Formation of primordial black holes from density perturbations in the early universe
7
Primordial black hole vs. black hole
4
Primordial color charge fluctuations that failed to die out due to cosmic inflation