Potential in the midway between parallel plates

I think the problem is in the first part itself where you take potential to be zero at infinity in case of a uniformly charged plate. Check this paragraph from Griffith. 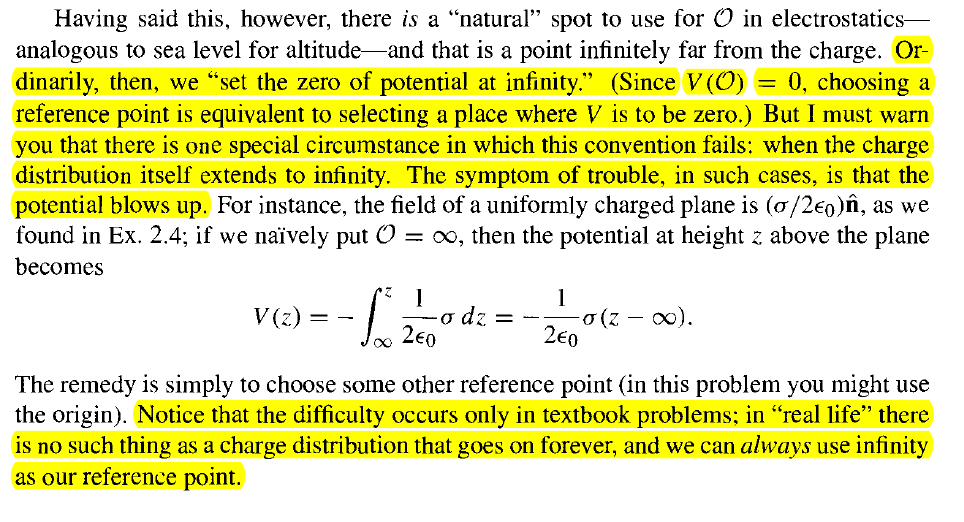 You are mixing up "potential" and "force" or "electric field". Force results from a gradient of potential: a change in potential vs distance traveled. kq/r is the formula for potential around a point charge. To find the potential around two infinite, parallel, charged plates it is necessary to do an integral of kq/r over the whole surface of both plates. I won't go into the details. The end result, though, is that the potential actually comes out to be kz, where z is the distance from one plate to the point where you want to find the potential.

The electric field strength is, in that case, constant between the plates; and the field points along lines perpendicular to the two plates.

On either side outside the two plates, the potential is the same everywhere. Because it doesn't change vs distance traveled, there is no electric field there. Another way to look at it is that a test charge sees two infinite planes, both in the same direction but charged oppositely. The electric fields from the two planes are equal and opposite, so they cancel out. Between the plates, though, the two electric fields add together.

Not the answer you're looking for? Browse other questions tagged electrostatics potential conventions or ask your own question.