Why is a nuclei with too many neutrons unstable? [duplicate]

I understand that a nuclei with too many protons is unstable as the electromagnetic repulsion becomes too strong to be balanced by the strong nuclear force.

However in the case of there being too many neutrons, surely the addition of neutrons should be adding extra strong nuclear force without extra electromagnetic repulsion, which should make a nucleus more stable. Why is this not the case?

In the simple yet remarkably accurate liquid drop model of the nucleus, there are five contributions to the nuclear binding energy. As a function of the mass number $A$ and the atomic number $Z$, the semi-empirical formula for the binding energy is 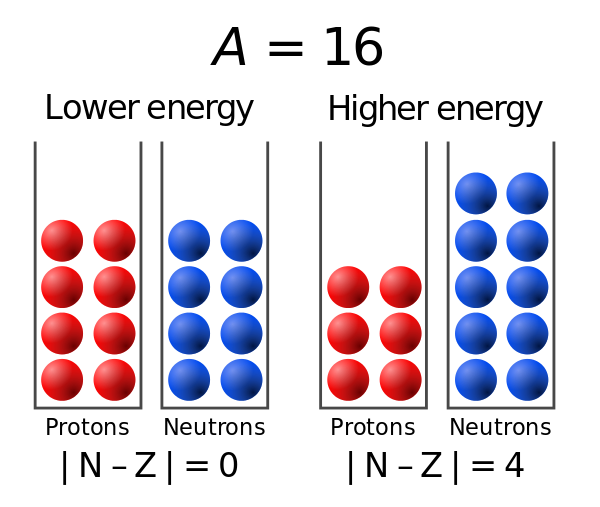 The parameters $a_V,a_S,a_C,a_A,$ and $\delta_0$ can be experimentally measured. The resulting prediction for binding energy is remarkably good, especially considering the simplicity of the model. More sophisticated models take into account things like the nuclear shell structure, which provides extra stability for the "magic numbers."

In the context of this model, your question is answered by the asymmetry term. An excess of neutrons causes the neutron Fermi level to be too high - the nucleus would be more stable if some of extra neutrons underwent beta decay and became protons, so generically this is what happens.

This is a qualitative answer:

Neutrons decay with a mean life of ~15 minutes. Within a nucleus the strong interaction can bind the neutron to a proton, with a binding energy analogous to the energy levels of the atomic binding of electrons around nuclei.

The qualitative reason is that the two neutrons are part time shielding each other from the attraction of the proton as neutron rich nuclei mostly decay by the beta decay , which is the decay of a neutron. There are various nuclear models that fit the behavior, for example this publication fits data using a shell model for the nucleus.

Not the answer you're looking for? Browse other questions tagged particle-physics neutrons or ask your own question.

58
How come neutrons in a nucleus don't decay?
17
Adding many more neutrons to a nucleus decreases stability?
6
Evidence that nuclei contain neutrons and protons (other than nucleons appearing if a nucleus is smashed)?
2
Why don't neutrons cluster on their own?
1
What feature of the Beryllium nucleus makes it such a good source of neutrons when hit with alpha radiation
2
Unstable vs. stable nuclei plotted on a graph
0
formation of atomic nuclei from nucleons