Heating and Cooling down time of an object

Let's say I have 2 identical metal bars, same properties and everything, both are at 100 degrees Celsius. Is the time heating up one metal bar to 120 the same as cooling one down to 80 degree Celcius?

I think we can assume that it is, formula for heating/cooling of metals is $$Q=m*c*\Delta t$$ where $t$ is temperature, as $\Delta t$'s are equal, same with required heat and time if we use same power in both cases.

Expanding on the comments...

One of the ways to figure that out without solving equations is to take advantage of free and easy to use electrical spice programs and model heat transfer with electrical circuits. This should work because, with a proper modeling, since underlying equations for charge and heat transfer are similar.

The circuits and the simulation results are shown below. Here we can see that, due to symmetrical conditions and linearity, the cooling and heating will take the same time. 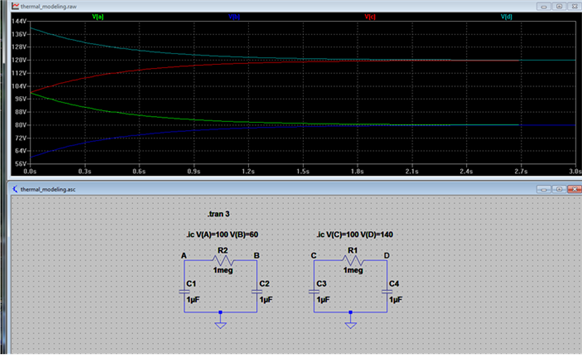 NOTE: Since we don't know the actual physical characteristics of the bars, we are picking random electrical equivalents and, correspondingly, the results of the simulation should not be interpreted as absolute. 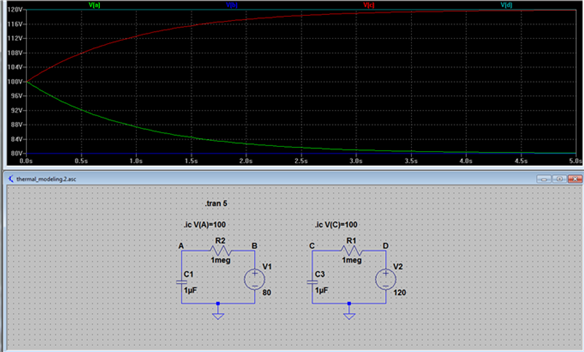 Here, again, due to symmetrical conditions and linearity, the heat transfer will take the same time.

3
Is the cooling rate of a (very) cold object, sitting next to an AC higher or lower?
0
Reduced Pressure and Cooling
2
Cooling of a hot metal object in air
2
Radiative Cooling of metal object
0
Do two objects at different temperatures disipate heat evenly?
0
Heat capacity increases with temperature
0
Relationship between Specific heat capacity and Newton's law of cooling
0
Multiple heat sources on the same object, conduction only